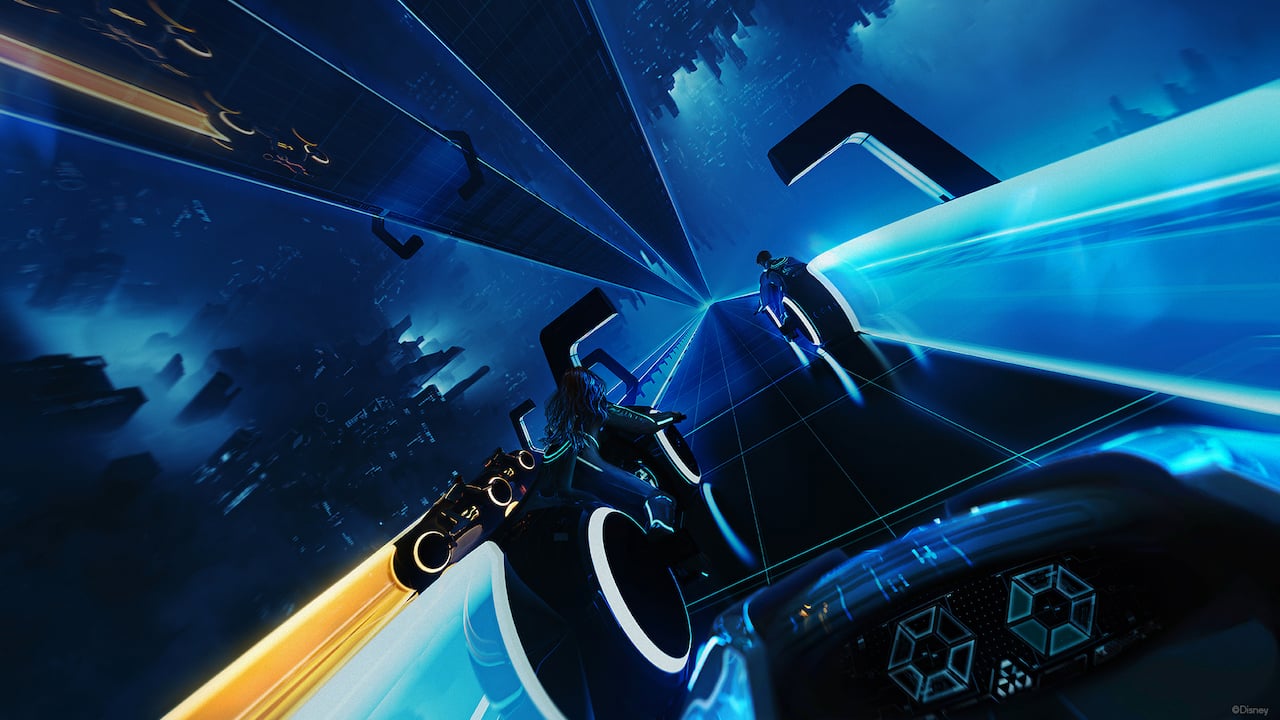 Confirming what we shared back in November, Disney has now announced that TRON Lightcycle / Run presented by Enterprise will indeed open during the first week of April at the Magic Kingdom — on April 4, 2023, to be exact.

The story of TRON Lightcycle / Run picks up after “TRON: Legacy” where Kevin’s son, Sam Flynn, has opened a second gateway into a digital world called the Grid. The first portal was built at Shanghai Disneyland with the original TRON Lightcycle Power Run.

When guests enter the queue at Magic Kingdom, they’ll feel as if they’ve been digitized and transported to the Grid for a special Lightcycle race. It’s your Team Blue against the Grid’s menacing Programs, Team Orange. Your goal is to be the first to race through eight Energy Gates and secure victory. The attraction will be one of the fastest coasters at any Disney theme park in the world.

Before the attraction officially opens, cast members will be the first to enter the Grid during special previews. Annual Passholders and eligible Disney Vacation Club Members will receive previews as well. More details on these events will be shared at a later date.

TRON Lightcycle / Run was announced in 2017. The addition has required reconfiguration in Tomorrowland, including the rerouting of the Walt Disney Railroad through a tunnel beneath the coaster. The Railroad was closed for four years, only having reopened last month. Guests onboard the train have gotten a peek at the construction as they pass through the tunnel, and TRON-themed audio was added to the ride.

See our latest construction update here, where we take a look at the recently installed height requirement and restroom signs.

Tomorrowland Light & Power Co. remains closed at this time. It is expected to serve as the TRON gift shop in addition to its current role as the exit shop for Space Mountain. Most of the 1994 Tomorrowland theming has been stripped from the exterior, and the interior gutted for a full refurbishment.

If you can’t wait for April 4, you can watch our full ride video from Shanghai Disneyland below.

The ride vehicle is shaped like the iconic Lightcycles from the film. Riders will sit on the seat, leaning forward to reach the handlebars. Restraints will be behind the calves and against the back. Guests’ feet go into bucket-like stirrups.

We’ve recently learned that the accessible Light Runner car vehicles at the end of the trains may also be used to accommodate guests whose mobility or size are not compatible with the Lightcycles.

At Shanghai Disneyland, where the TRON roller coaster already operates, the Lightrunner cars are used explicitly for guests who use mobility devices such as wheelchairs. However, it seems the Magic Kingdom version will be used to accommodate a larger group of guests who would otherwise be unable to ride.

The Light Runner cars are instead equipped with a standard lap bar. If Walt Disney World does choose to utilize the car for a wider group of guests, we expect it will result in longer waits for those who need it.

Are you excited for the grand opening of TRON Lightcycle / Run? Stay tuned to WDWNT to find out when preview opportunities are announced.