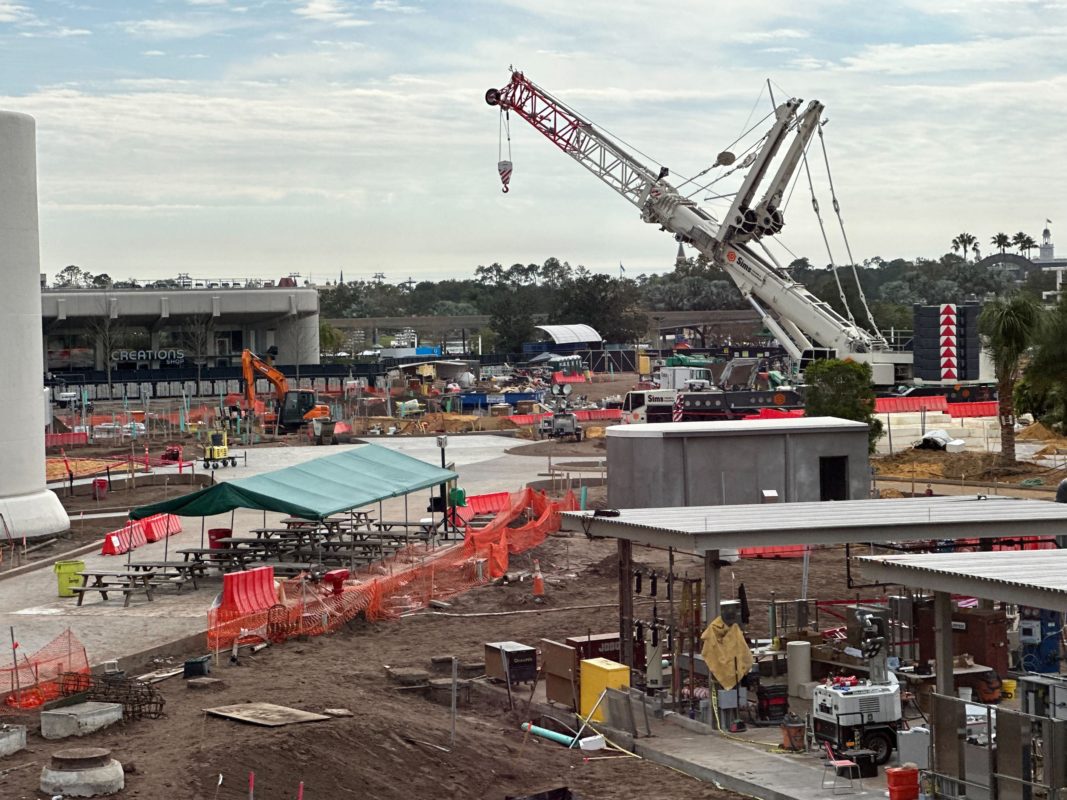 Let’s take a look at how EPCOT construction is progressing. There are now construction projects happening in World Discovery, World Celebration, and World Nature that we can see from the Monorail route.

The interior of EPCOT guest relations was refurbished last year, but a patch of land outside remains under construction.

The construction walls were recently removed and replaced with scrim-covered fencing. But the area behind the fence is still just dirt, with a digger parked on site.

The pavement within Cool Wash was ripped up and has yet to be replaced. A sign renaming it Refreshment Station was installed in October, but later removed.

The station is surrounded by rolling planters while it remains closed.

The main project currently under construction in World Celebration is CommuniCore Hall and the adjacent CommuniCore Plaza, which replace the original festival center that was planned.

The basic shape of CommuniCore Hall has come together with supports and concrete columns. CommuniCore is a reference to two pavilions that were part of EPCOT on opening day. They were later reimagined into Innoventions, before eventually being demolished.

The new CommuniCore Hall and Plaza will serve as a multi-functional space that will be used during the park’s various festivals. The hall will be home to a Mickey & Friends meet and greet, a demo kitchen, a mixology bar, a gallery space, and more.

Some crew members were working on the roof of the hall when we passed by on the Monorail. The roof was recently covered in corrugated paneling.

There is a large concrete column at the center of the structure and a second on the side.

The ground within and directly around the hall has been paved. Construction materials and cherry-picker vehicles are inside.

A giant crane is parked at the back of Journey of Water, Inspired by “Moana.”

It’s facing the center of the construction site but wasn’t in use when we passed by.

Behind Spaceship Earth, a new Walt Disney statue will be installed at a spot called Dreamer’s Point. The surrounding area will be filled in with gardens.

Above is the concept art of the statue in place. The statue itself was revealed at D23 last year.

Short metal poles outline the gardens in front of Creations Shop, which replaced MouseGear as EPCOT’s flagship shop, and Connections Cafe and Eatery.

Leafless trees were planted just behind the construction walls a few weeks ago.

Above is concept art of the area behind Spaceship Earth, including trees lining the gardens and courtyard.

A few diggers are on site to move dirt around.

A paved sidewalk leads from nowhere to CommuniCore Hall.

It passes two wooden structures yet to be encased or filled with concrete.

As seen in the above concept art, CommuniCore Hall will be roughly U-shaped.

Some of the pavement has been pulled up from in front of the World Nature restrooms. The planters to the side have also been emptied.

The restrooms closed in April 2022. Since then, the red and blue tiles have been torn out. The plain wall separating the rooms will likely get new paint to match the rest of EPCOT’s updated color scheme.

CommuniCore Hall wraps around the restrooms.

Some paneling painted white has been installed on this lower section of the building.

Journey of Water Inspired by “Moana”

The concrete wall in the above photo is on one side of Journey of Water Inspired by “Moana.”

The walkthrough attraction is made up of water features built into fake rockwork. The rocks are covered in fake plants and moss, and feature some Easter egg carvings.

Two themed canopies were recently installed, shading one section of the attraction.

The poles wrapped in white plastic will eventually hold lanterns.

Palm trees have been planted throughout.

The ground in this area has been flattened.

Guests will enter near the tall section of rock featuring Te Fiti’s swirl. They will encounter Te Fiti herself in the form of a 16-foot-tall statue, visible in the background of these photos.

Here is the first concept art released for Journey of Water, featuring the swirl of Te Fiti.

The swirl rock structure is decorated with flowers, and we’ve previously seen water flowing over it. The pathways of the attraction are becoming more defined as scaffolding comes down and work on the sidewalks begins.

Another concrete wall juts out from behind the main rockwork, but it’s slowly being hidden by dirt and plants.

A pathway next to the attraction has been partially paved.

This leads towards a paved section behind Spaceship Earth.

This is where the crane looms and may be the future home of Dreamer’s Point.

Journey of Water, Inspired by “Moana” is scheduled to open this fall. It’s visible in this concept art that also features glimpses of the World Celebration gardens and CommuniCore Hall.

Here’s a zoomed-in look at Journey of Water. Te Fiti can be seen at the center, looking over a pool of water. The orb-shaped lanterns hang throughout, and water jumps across pathways to the right.

Check out our list of every new attraction coming to Disney Parks this year.