Imagineer Joe Rohde has been taking Disney fans on an online digital tour of Animal Kingdom through his Instagram, providing deep backstory on its ethos and culture. He’s discussed the Tree of Life, Africa, Asia, and Expedition Everest, but now we’re heading to the American southwest to Diggs County and DinoLand, U.S.A.! 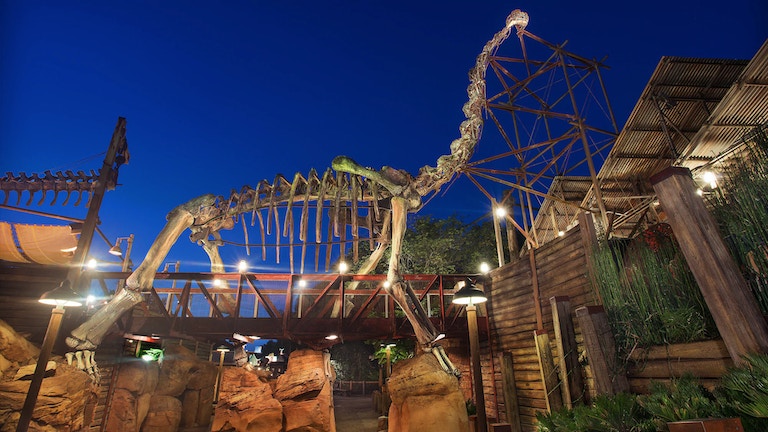 “A lot of our Disney’s Animal Kingdom research took us to far away foreign countries… But it also took us to some of the great paleontological sites in North America. Paleontologists like Phil Currie and Bob Bakker were kind enough to instruct us.

We are very liberal about the dinosaurs that you encounter in this land, both in geography and chronology, though they are Cretaceous era creatures….if you see something that looks like a fossil of a Prehistoric creature, it is either a real fossil of a prehistoric creature or a replica of a real fossil. (The Carnotaurus in the queue line for the ride is a composite. The real Carnotaurus is smaller.) The interesting thing about dinosaurs is that they are created by our imagination as a result of research and speculation….Because of this, there is always debate about their true nature. That debate is embedded in the land in the context of many of the graphics.

Dinoland has a lot of humor and because of that I think we can relax some of the seriousness of some of the other themes and get away with some hijinx.”

“There is of course the Brachiosaurus at the Gateway. Triceratops in the queue. The famous and controversial Sue tyrannosaur fossil. A Parasaurolophus in the Boneyard. A Pteranodon, a Styracosaurus, another Tyrannosaur skull, an Allosaurus skull and a Hadrosaur skull and Phobosuchus skull in Restaurantosaurus. The Brachiosaurus is substantially modified… Other than that, these are the same casts you’re going to see in a museum.” 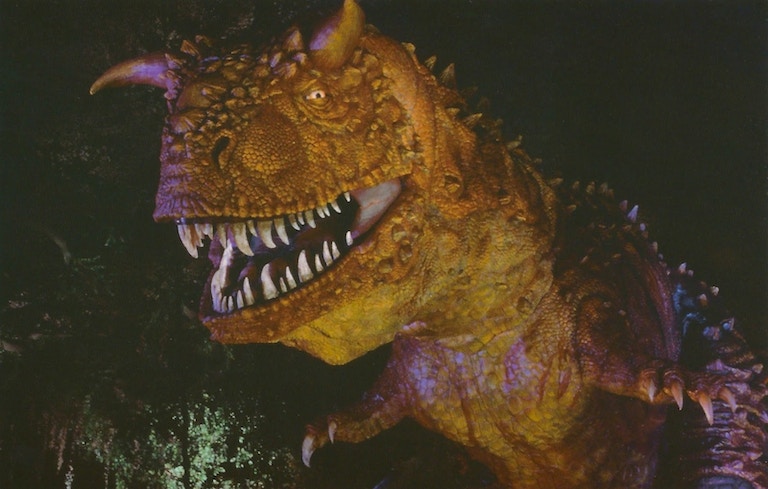 “Dinosaur” in Dinoland at Disney’s Animal Kingdom is one of our few IP-based attractions. At the time, the film had groundbreaking CGI effects. Originally there was a Styracosaurus out front for no better reason than it’s my favorite dinosaur…and the attraction was called Countdown to Extinction. We renamed it when the film came out, but the link to the film was already there. It may not be obvious, but such decisions have to be made years in advance. You don’t get a figure that looks like a character in a movie unless you start way before you open.

The Carnotaurus in the ride is substantially bigger and wider than a real Carnotaurus would be. This is because we had to fit a whole bunch of machinery inside of it. So we invented a new species, Carnotaurus robustus. A real Carnotaurus is a pretty weird looking animal to start with… With really really stubby short arms. Our Carnotaurus kind of reaches out towards you with his little hands… But I’m not sure a real one could even do that.

Many plastic toy Carnotauruses seem to be based on our interpretation which is odd because it’s so specifically distorted for our own attraction reasons. Many toy Carnos are red…why?!? That’s a weird color for a big predator. We chose it for narrative and scenic reasons. They are often thicker and toad-faced like ours. Their arms reach out. Go check. Just do image search on Carnotaurus toy. Then look up Carnotaurus sastrei, the scientific specimen. Sometimes a popular image just takes over. Shows you the power of art.”

Lastly, Joe discusses some real folk art that you can find only at Dinoland! 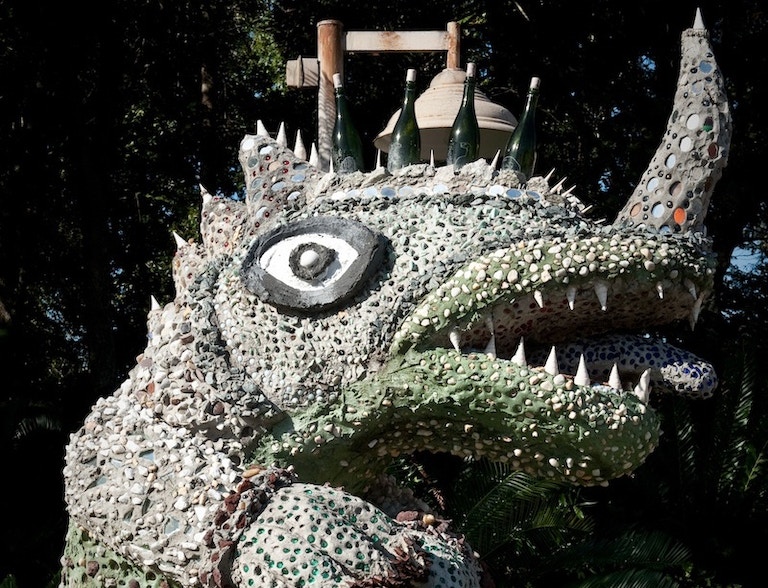 “When we were building Disney’s Animal Kingdom The House of Blues was being built at what was then an expansion of Downtown Disney. They had employed a prominent folk artist, Gregory Warmack, who went by Mr. Imagination. We enlisted him to create an actual work of American folk art in front of Chester and Hester’s Dinosaur Treasures. He came out to our site and created the concrete dinosaur in this photo.

His other work has been shown or exists today in places like the High Museum of Art in Atlanta, the American Visionary Art Museum in Maryland, The Smithsonian, The Dallas Museum of Art. I believe that the work he created for us is not actually included in his curriculum vitae. It should be. So I hope some art historian is looking.

He has since passed away, but I think it’s kind of interesting that our tribute to the unsung folk arts of America includes an actual work of unsung Folk art.”