With Disney Parks around the world closed for the foreseeable future, WDWNT is dipping into our archives of vintage parks materials for a look back into parks history! And in celebration of Hollywood Studios Appreciation Week, all this week, we’re peeking into the studio vault with items from the early years of the Disney-MGM Studios! Get ready a star-studded premiere with this press itinerary to the Star Tours Grand Opening Weekend from January 1990!

Note: This article will detail the itinerary page by page, but WIGS Members will have access to download a full-resolution PDF of the entire thing. Head on over to Patreon.com/wdwnt to join WIGS, the WDWNT Inner Globe Society, for as little as $2 a month and unlock access to great content like this, and much more!

While the focus may be on Star Tours, this opening was actually a double feature, as it also marked the official opening of the Walt Disney World Swan. And if you were a member of the press covering this event, January 12th-14th was a weekend to remember. 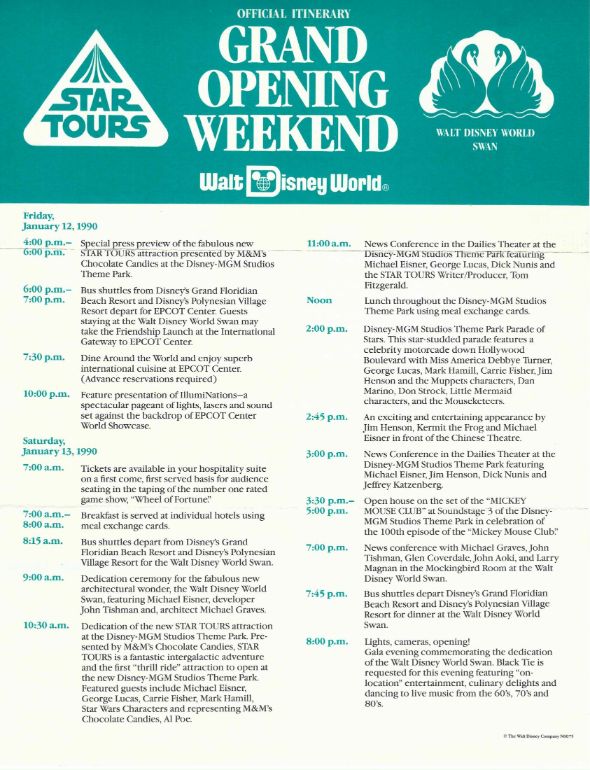 Friday the 12th was a day to ease into the magic, with the centerpiece being a special press preview of Star Tours. (Of course, the public was already taking flights to the forest moon of Endor, with the attraction officially opening at the park on December 15th, 1989. This weekend served as the attraction’s dedication ceremony.) Later in the evening, you could head to EPCOT Center for dining and a presentation of IllumiNations.

The big day was Saturday the 13th. Starting off the day was the dedication ceremony of the Walt Disney World Swan, with Michael Eisner, developer John Tishman and the resort’s architect Michael Graves in attendance, before press moved to the Disney-MGM Studios for the dedication of Star Tours. Joining Eisner was Star Wars creator George Lucas, along with Princess Leia and Luke Skywalker themselves, Carrie Fisher and Mark Hamill, along with characters from the franchise and Al Poe, representing the ride’s original sponsor, M&M’s. Press then headed to the Dailies Theater for a press conference with Eisner and Lucas along with Dick Nunis, then the president of Disney’s Outdoor Recreation Division, which oversaw all theme parks in Florida and California at the time, and the attraction’s writer and producer, Tom Fitzgerald.

But the ceremonies were just the beginning of the fun. Following a parade of stars, it was time to meet the Muppets… well, the person who created them, anyway: future Disney Legend Jim Henson. Henson, who was deep into work on a deal that would sell his company to Disney, appeared with Eisner and his most beloved creation, Kermit the Frog, in front of the Chinese Theater, before joining a press conference with Eisner, Nunis, and then-chairman of the Walt Disney Studios Jeffrey Katzenberg, likely to discuss the future of the Muppets with Disney. After that, press could then tour Soundstage 3, which was then the home of “The All-New Mickey Mouse Club”, in celebration of their 100th episode.

Then it was back to the Walt Disney World Swan for another press conference, followed by a black-tie gala to celebrate the dedication, featuring “‘on location’ entertainment, culinary delights, and dancing to live music from the 60’s, 70’s, and 80’s.” 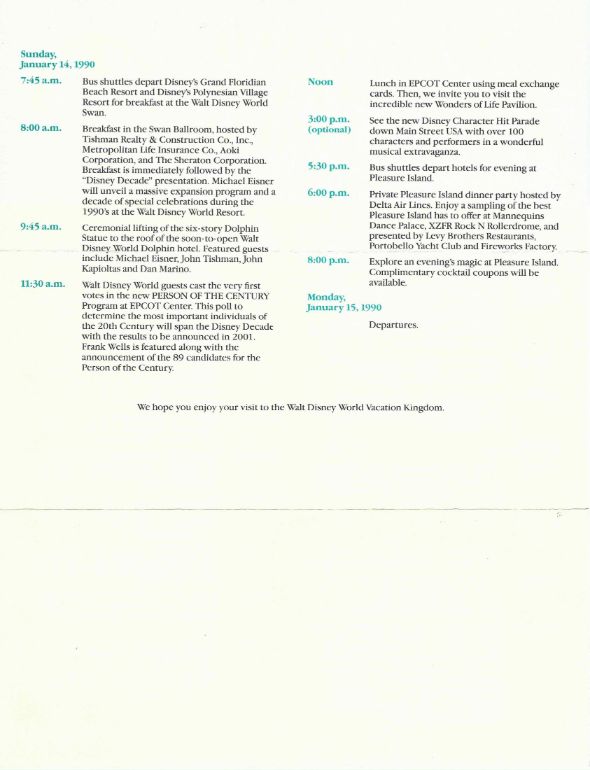 After a day of dedications, press conferences, famous faces and parties, you might be tempted to sleep in on Sunday the 14th. But you would’ve been missing out on an epic day! It started at the Swan, with a presentation from Eisner on the “Disney Decade,” an ambitious plan for new attractions and resorts at Walt Disney World and Disneyland throughout the 1990’s. Some ideas came to fruition, like Disney’s BoardWalk and the Magic Kingdom’s version of Splash Mountain, but others didn’t. Could they have discussed Dick Tracy’s Crime Stoppers or The Great Muppet Movie Ride?

Later, press could view the lifting of the statue onto the roof of the soon-to-open Walt Disney World Dolphin, with Eisner and famed Miami Dolphin Marino in attendance. Then it was on to CommuniCore at EPCOT Center, where future Disney Legend Frank Wells officially opened polling for the “Person of the Century,” a program to vote between 89 candidates to determine the most influential person of the 20th century that was supposed to last through the 1990’s… until it was unceremoniously cancelled in March 1991. Press could then visit the recently-opened Wonders of Life pavilion, or see the Disney Character Hit Parade at the Magic Kingdom. The weekend was capped off with a private dinner party at Pleasure Island, where visitors could enjoy the fun at Mannequins Dance Palace, XZFR Rock N Rollerdrome, and dine at Portobello Yacht Club or Fireworks Factory.

From celebrities to parties and Disney Legends galore, this was a weekend to remember!