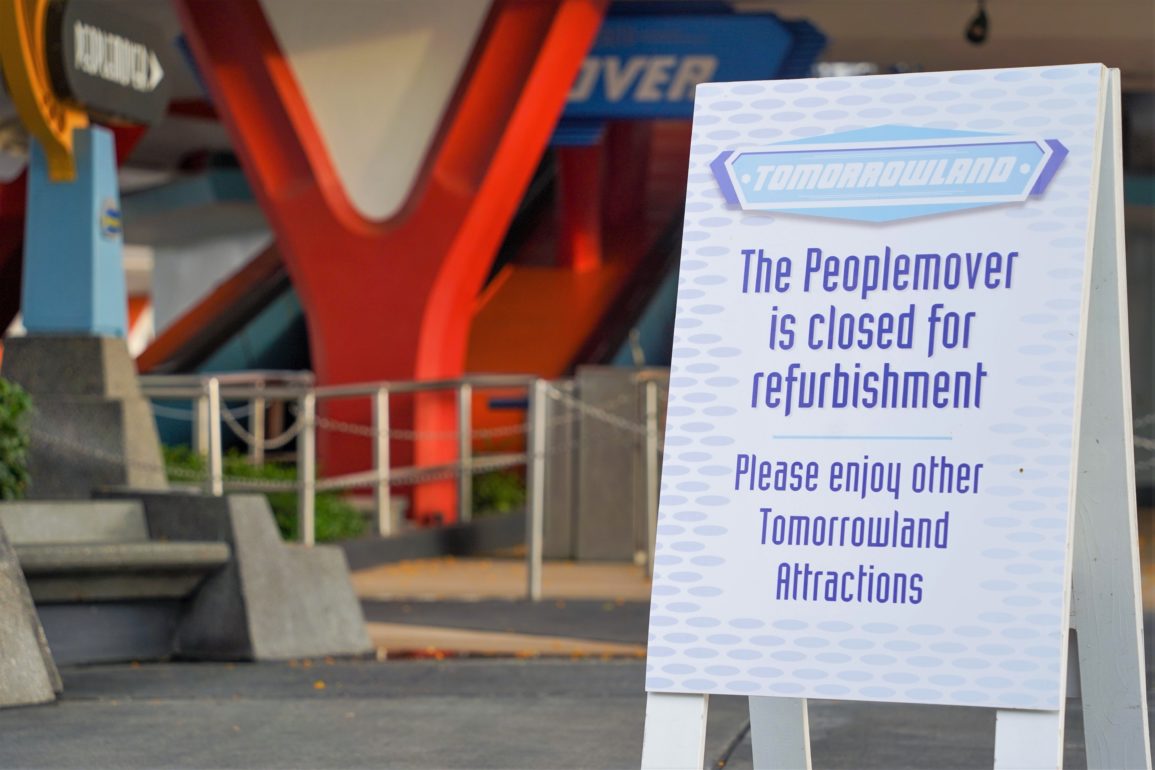 Hello from the Magic Kingdom on a lovely Spring Saturday! There’s quite a bit going on in the park today, as the Tomorrowland Transit Authority Peoplemover prepares to open, Dapper Days 2021 kicks off, and more. Things are getting going early, so let’s head on it.

As usual, guests hurried down Main Street as soon as they were let into the park and headed for their favorite attraction.

At Cinderella Castle, work continues on the refurbishment of the stage, which appears to be fairly close to completion.

As work also begins to wrap up on the castle, we can’t help but notice one of the lamp posts is still missing.

Behind the castle at Cinderella Fountain, a panel was conspicuously dislodged from the base of the fountain.

Our next stop would be to the Tomorrowland Transit Authority PeopleMover, which was announced to open at some point this weekend.

Unfortunately, these signs, which have been a Tomorrowland staple for several months, would remain in place today. Alas, it would not be the day that the PeopleMover reopens.

Despite not reopening today, we knew the PeopleMover would open Sunday as there have been massive amounts of activity at the attraction. Cast Members from around the park would be given the opportunity to ride the PeopleMover, and management would come and go from the ride throughout the day. Even Stitch had a ride aboard the highway in the sky before the park opened.

Similarly, guests would swarm the attraction to see if it had opened, having heard the news of the imminent reopening. Some guests, dressed to the nines for Dapper Day, even had PeopleMover-themed attire.

Throughout the park, guests were dressed in their finest garb and taking advantage of the recent change to allow maskless photos.

While many changed their outfits for the festive weekend, Buzz Lightyear was in the usual space suit in Tomorrowland.

At the nearby Space Mountain, the attraction was down for the first couple hours of the day but eventually returned to service in the late morning.

Also in Tomorrowland, we took a look at Merchant of Venus, which may be on its last legs as it has seemingly disappeared from the Walt Disney World website.

Finally rounding out Tomorrowland, TRON Lightcycle / Run has made slow progress since the frame was completed weeks ago. Since then, the temporary supports have gradually been removed ahead of eventual lighting and covering being added.

In the Hub, our favorite princesses showed off their own intricate dresses and interacted with guests mirroring some of those styles.

Speaking of entertainment, the Hundred Acre Wood crew would be found on a bus today, instead of their usual horse-drawn trolley.

In Fantasyland, we’ve seen little in the way of progress since themed scrim covered most of Peter Pan’s Flight and the attraction’s sign was removed.

Steps away, the Tangled section of Fantasyland has also seen little in the way of movement since work initially started.

Finally, back on Main Street at The Emporium, some new ID holders from Loungefly have appeared. The four styles are based on “it’s a small world” and Mouseketeers, with each of those offering versions with lanyards or retractable reels. Check out our article for additional details.

Thanks for spending this Dapper Day with us at the Magic Kingdom! Be sure to stay tuned to WDWNT.com as we track the many projects happening at Walt Disney World.