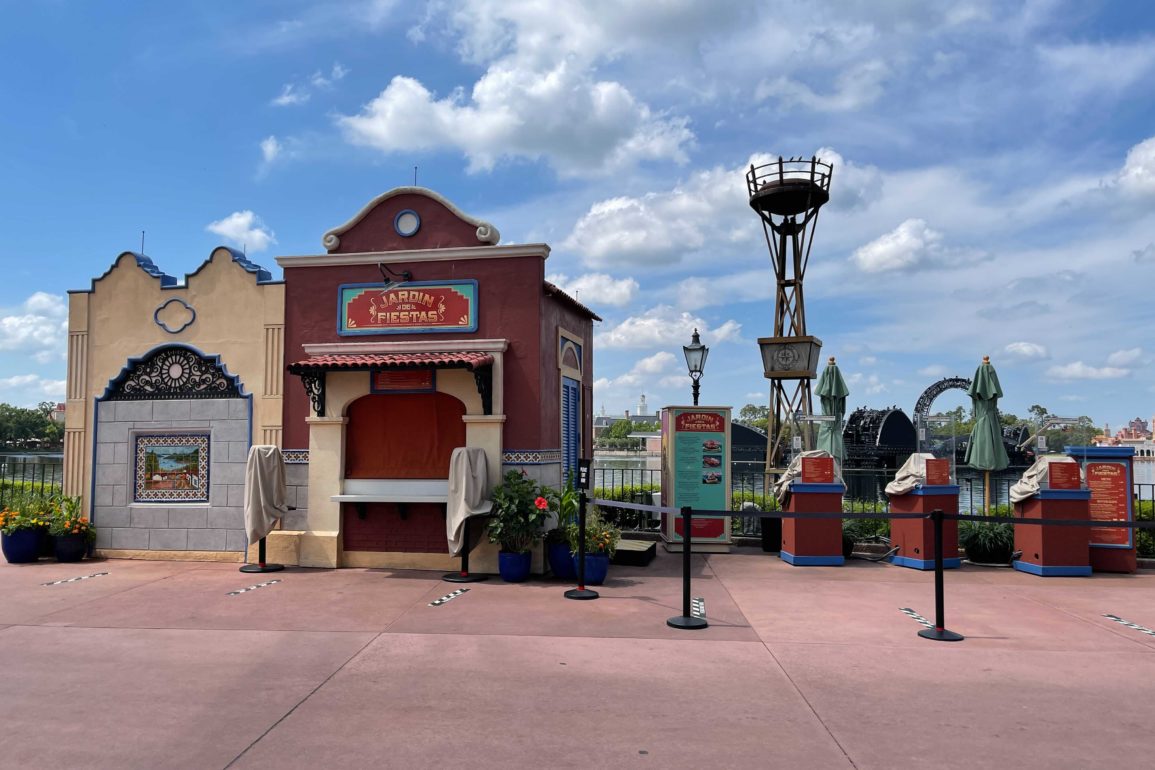 Hello from the ever-lovely Walt Disney World! Even though we’ve had very hot weather here, a hot day at Disney is better than a cooler day anywhere else. We found some new things to show you today, as well as some construction updates. We started our day at EPCOT, which never disappoints in the construction update department. Let’s get started!

With work speeding along on the future Creations Shop in Innoventions East, we were excited to see some scrim fabric removed in the breezeway next to Mouse Gear. We got a little peek into this area, and could see through to the large glass windows on the other side.

Nearby at Guardians of the Galaxy: Cosmic Rewind, work continues on the exit of the show building.

New concrete has appeared in the Morocco Pavilion, replacing the previously scored patches.

Another patch of concrete has been scored next to the fresh concrete, covering the entrance to Spice Road Table.

Two recently-added themed signs which were painted in this area have been removed or covered over. One was on the cart, and one was on the wall behind the cart.

The “Rally of the Gazelles” screen was on once again today, although still unavailable to guests.

Jardin de Fiestas, the Flower & Garden Festival food booth in the Mexico Pavilion, was closed again today for the fourth day in a row. Cast Members in the area were unaware of why it was closed, or when it would reopen.

While we have found several merchandise pieces for the upcoming film “Cruella”, we had yet to see a display for this line, until today. The red dress in particular was finally done justice by being put on a mannequin here in Mouse Gear.

We had a great time at EPCOT, but our day wasn’t over yet. Next, we headed over to Disney’s Hollywood Studios to see what new things we could find there.

While signage seems to be slow to change across Walt Disney World, we finally found new signage pertaining to face masks being required at indoor locations. For more pictures and information, check out our article here.

As with similar locations across Walt Disney World, we found physical distancing measures had been reduced but not removed completely at MuppetVision 3-D. For more pictures and information, check out our article here.

We noticed the doorway of The Darkroom was covered in black scrim fabric while it is being refurbished.

We found a new gourmet popcorn mix at the popcorn stand just in time for summer, the “Sweet and Savory Popcorn”. A combination of cheese and caramel popcorn, this mix is a satisfying treat.

We had a great time at Disney’s Hollywood Studios, and we hope you enjoyed coming along with us. Have a magical day!

Next
PHOTOS: New Stitch Dress and Purse Escape For Summer at Magic Kingdom