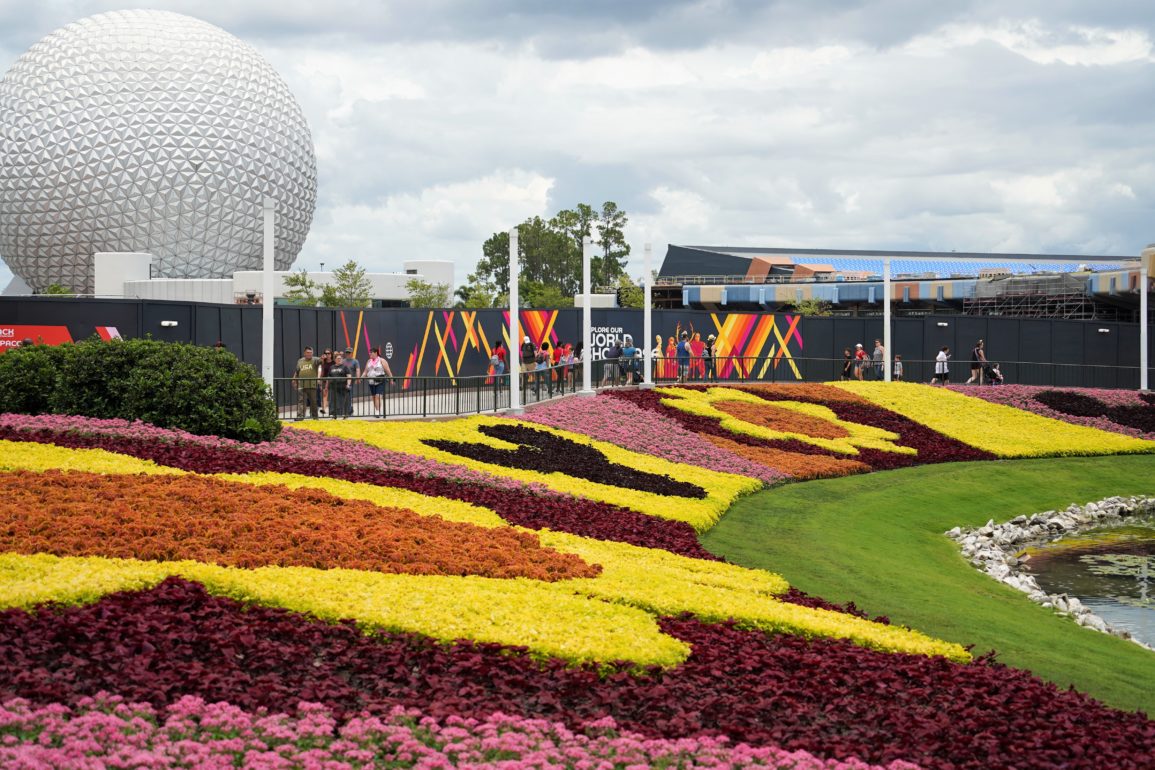 Greetings from EPCOT! We’re starting off the first weekend in June, and while not officially summer, at Walt Disney World it is as students start summer breaks, hurricane season has begun, and the weather is warm and wet. In anticipation of summer and 50th anniversary crowds, changes continue to happen around the park.

At the entrance to the park, some refurbishment work was performed months ago to restore the overhang above the “tapstiles”, which included new entrance signage. The ceilings, were never quite finished.

Speaking of entrance work, more replacement paving is being installed near Spaceship Earth, with several other sections having already been completed.

Points of Light have recently been installed on the lowest points of Spaceship Earth’s iconic geodesic sphere in advance of the new light display debuting later this year.

At the adjacent Innoventions East, work has been moving quickly for a summer opening of Creations Shop and Club Cool.

Stop us if you’ve heard this one before: work on Guardians of the Galaxy: Cosmic Rewind has been at a snail’s pace. We’re at least seeing some minor changes to the surrounding grounds, though.

Back at the future home of Creations Shop, paint is being applied as the building is converted to a more classic look.

On the west side, we got a couple more looks at a structure which has just ‘gone vertical’, believed to be for the future Moana-inspired ‘Journey of Water’ attraction.

Other water in the park has resumed its journey, with the jumping fountains once again operational at the Imagination Pavilion.

The fountains of the Harmonious barges were not being tested today, however most of the lighting was on.

On the barge nearest the U.K. Pavilion, a crew was working on some elements of the arm— quite possibly the lighting.

Back in Italy, the site of the removed gelati kiosk is still surrounded by low walls.

At America Gardens Theatre, we’re seeing the changes made to Walt Disney World’s mask policy on Friday being implemented, as guests in outdoor theaters are no longer required to have a face covering on.

In Morocco, work continues on the courtyard at the heart of the pavilion.

In the back of the pavilion, we noticed that the long-broken Restaurant Marrakesh sign had been repaired. Previously, the letter “K” was half-missing.

In the U.K. Pavilion, guests still have the opportunity to meet Alice and Mary Poppins—at a distance, of course. Characters have been fairly sporadic and limited at EPCOT, and only one cavalcade operates.

With the Taste of EPCOT International Flower & Garden Festival running all the way until July 5th, far later than past years, the Spring flowers aren’t a viable option for the entire festival. Many have been replaced with colorful plants, resulting in duller colors than what guests may be used to.

At The Land Pavilion, Cast Members are reminding guests to put those masks back on before entering.

Inside, seating for Sunshine Seasons is no longer distanced as it once was—another change made in Friday’s policy update.

Outside of Mission: SPACE, we saw the line spilling out of the attraction, something we haven’t observed in quite a while. With capacity increasing, but indoor queue distancing not yet reduced, some attraction lines will be growing over the summer.

As we exited, we made sure to get a last look at the fountain and flags in the entrance plaza, as they are just as charming whether entering or leaving the park.

Thanks for joining us today on our trek around EPCOT, and we look forward to bringing you more updates from all of the Disney parks!