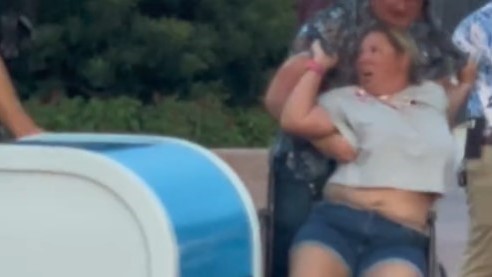 Social media exploded yesterday with numerous videos of a woman’s loud, rowdy, and sometimes hilarious removal from EPCOT during the 2022 EPCOT International Food & Wine Festival. The journey seems to start in the UK Pavilion, where an apparently drunken woman can be seen being restrained by other members of her party as she argues with Disney Security and Orange County Sheriff’s Deputies.

TikTok user @corasmomster starts our tale with a video and caption “On our way out of Epcot, we encountered a little situation”. Warning: this story contains adult language and lewd gestures. The woman can be heard screaming “You’re the cops! You have every right!” and “I’ve done nothing wrong!” while simultaneously seeming to ask to be arrested as she is directed towards the park exit. She is eventually placed in a wheelchair, and the drunken EPCOT ejection appears to be calming down.

However, this tale is far from over. While law enforcement is present, and the woman appears to be in the process of being removed from the park, she is not taken through nearby backstage areas, or through the International Gateway, just steps away. Instead, this parade is headed all the way to the front of the park.

The action picks up again, as @corasmomster films the unruly guest shouting “No! You will not do this to me!” in the walkway near the restrooms between Canada and the Imagination Pavilion. Someone can be heard saying “Lady, let go!” as she loudly refuses to cooperate and shouts at other guests. Items seem to be thrown to the ground at this point, and are retrieved by a Disney Cast Member.

As the saga continues, @coramomster continues to film as the woman appears to calm down, while a patient party member pushes her in the wheelchair. However, the mood quickly intensifies again, as she shouts at a deputy “Look at me in my eyes!” She is restrained in the wheelchair as she tries to rise to confront the puzzled and seemingly patient deputy. But the drunken EPCOT ejection continues.

As we arrive near the park entrance, the woman has dismounted (or fallen out of) the wheelchair, and appears to have more choice words and musters up one little spark of imagination for a rude gesture directed at deputies.

She is eventually put back into the wheelchair, but attempts to get out of it again on her way out, eventually ending on the ground. She finally staggers towards the exit, presumably to head for the parking lot, where hopefully anyone but her was driving.

While the social media reaction has been huge, this is where the drunken EPCOT ejection story ends for now. Puzzlingly, it doesn’t appear the woman was ever arrested or detained by Orange County Sheriff’s deputies.

@corasmomster provides a full recap of her view of the events in a final recap.

This is the latest in a long line of wild Walt Disney World incidents, including fights at the Magic Kingdom, EPCOT, Disney’s Hollywood Studios, and more than once aboard ferryboats.

Next
Everything We Didn’t Hear About During the Disney Parks, Experiences, & Products Panel at D23 Expo 2022