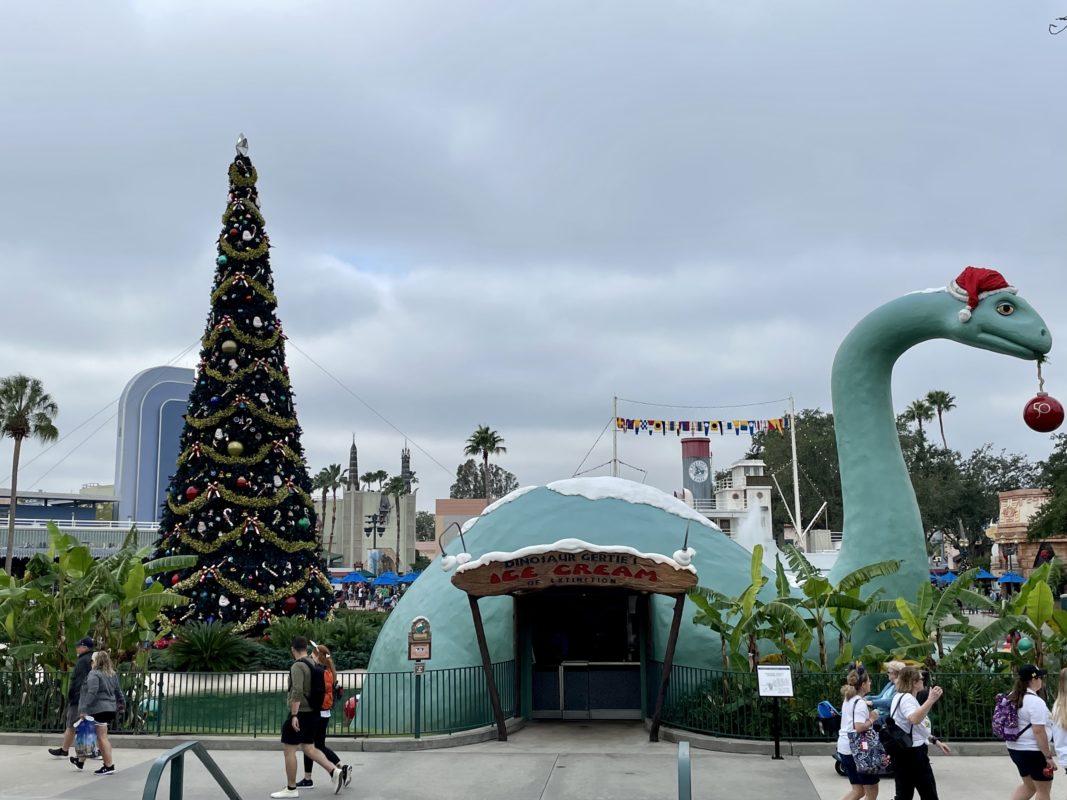 Happy Holidays from Disney’s Hollywood Studios! Join us around the park finding the new Disney 100 Years of Wonder merchandise, more replaced purple road signs, and so much more. Let’s get going!

Disney 100 Years of Wonder merchandise has debuted in the parks today. We found a Limited Release and a Limited Edition pin at the Darkroom.

The platinum Ear Headband is very shiny, and reflective.

Where is the CVS receipt tag on this headband?

A simple black shirt, celebrating Disney’s 100th Anniversary, is hanging on the shelves of Celebrity 5 & 10. This shirt does not fit with the rest of the shiny, platinum collection.

This Minnie Mouse doll can be dressed in Disney 100th Anniversary fashion.

2023 is only a few weeks away. This vintage-styled plush pendant flag is available at Mickeys of Hollywood.

Even more Disney 100 Years of Wonder merchandise is at The Majestic, in the form of Dooney & Bourke handbags. We also found these bags at Magic Kingdom today.

A new pullover sweater featuring Bambi, and a new “Lady and the Tramp” crop top can be found at Sunset Club Couture.

You can prepare for next Halloween, or just “play pretend,” with this “Toy Story” costume set. It comes with a hefty price tag of $169 but, has a Buzz Lightyear, Sheriff Woody, and Jessie costumes. It also includes a Forky head costume.

Don’t mind us. We are just admiring Rex’s reindeer ears!

The “cardboard’ facade has begun taking shape at Roundup Rodeo BBQ. This new sit-down restaurant is suppose to open before the end of the year but, we don’t know if that will happen.

It seems that guests didn’t want to visit Batuu today. We were pleasantly surprised at the lower crowds on the planet.

Disney’s Fort Wilderness has decked the halls for the holiday season.

At the Settlement, a large Christmas Tree sits in the middle, and each building is lined with garland.

You can now take a Holiday Sleigh Ride around the fort.

Disney’s Fort Wilderness campers really know how to “go all out” in decorations. If you are able to come stroll through the campsites at night, it’s a beautiful sight to see.

These guests made an entire Radiator Springs scene, Lighting McQueen and Mater included.

Thanks for joining us today, and we’ll see ya real soon!