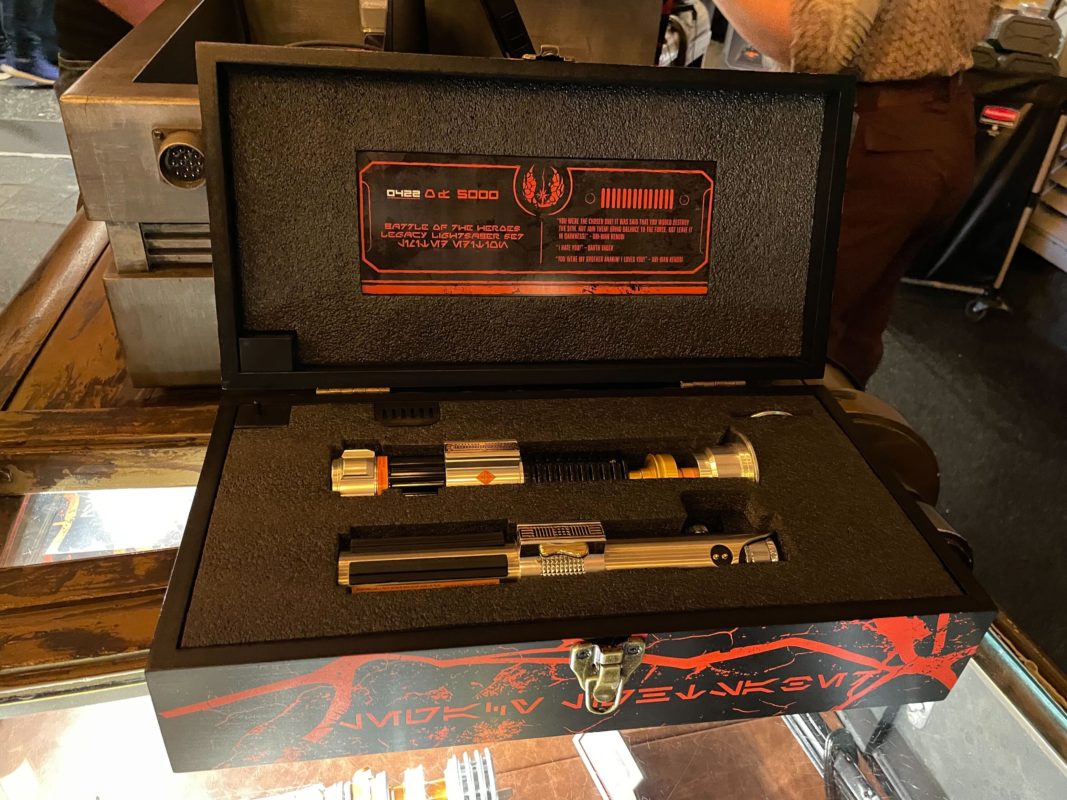 Inspired by the climactic duel of Obi-Wan Kenobi and Anakin Skywalker, a limited-edition Battle of the Heroes Legacy Lightsaber Set has arrived at Dok-Ondar’s Den of Antiquities inside Disney’s Hollywood Studios.

This limited edition set features the lightsaber hilts used by Obi-Wan Kenobi and Anakin Skywalker in a collectible case with a black-and-red design reminiscent of the molten fissures of Mustafar. This set is a limited release, with only 5,000 produced for fans of the Star Wars franchise.

They require 6 AAA batteries, included with the product, to produce special effects. Obi-Wan’s lightsaber is pictured on the top, and Anakin Skywalker’s is on the bottom.

The set comes with the case and both hilts, but no blades are included. Blades can be purchased separately at Dok-Ondar’s Den of Antiquities. A 26” blade is $50.00, and a 36” blade is $55.00. The blades are interchangeable as the kyber crystal within the lightsaber determines the color it will ignite. Both Obi-Wan and Anakin’s lightsabers in this set will be blue.

The edition number is printed inside the lid. “Battle of the Heroes Legacy Lightsaber Set” is in English above Aurebesh reading “Limited Edition.” Quotes by Anakin and Obi-Wan from the end of the battle are to the right.

Check out some of the other recently released lightsabers:

This set is also available at Disneyland.

Dok-Ondar’s Den of Antiquities offers more than lightsaber hilts, as the infamous Ilthorian collector has a large variety of relics to offer. From character clothing to Sith holocrons and kyber crystals, His shop is located in Black Spire Outpost at Star Wars: Galaxy’s Edge, but be forewarned — your Republic Credits are no good out here in Wild Space. Dok-Ondar will take Batuuan Spira, however, in addition to your standard cash or credit options. (Batuu is surprisingly agreeable to most Earth customs).

Star Wars: Galaxy’s Edge opened at Disney’s Hollywood Studios in 2019. The land has two rides, Millennium Falcon: Smugglers Run and Rise of the Resistance. There’s a themed bar called Oga’s Cantina, as well as quick-service venues. Dok-Ondar’s Den of Antiquities is the largest traditional store in the land but there are lots of smaller merchandise venues, including kiosks and the shops in the Market.