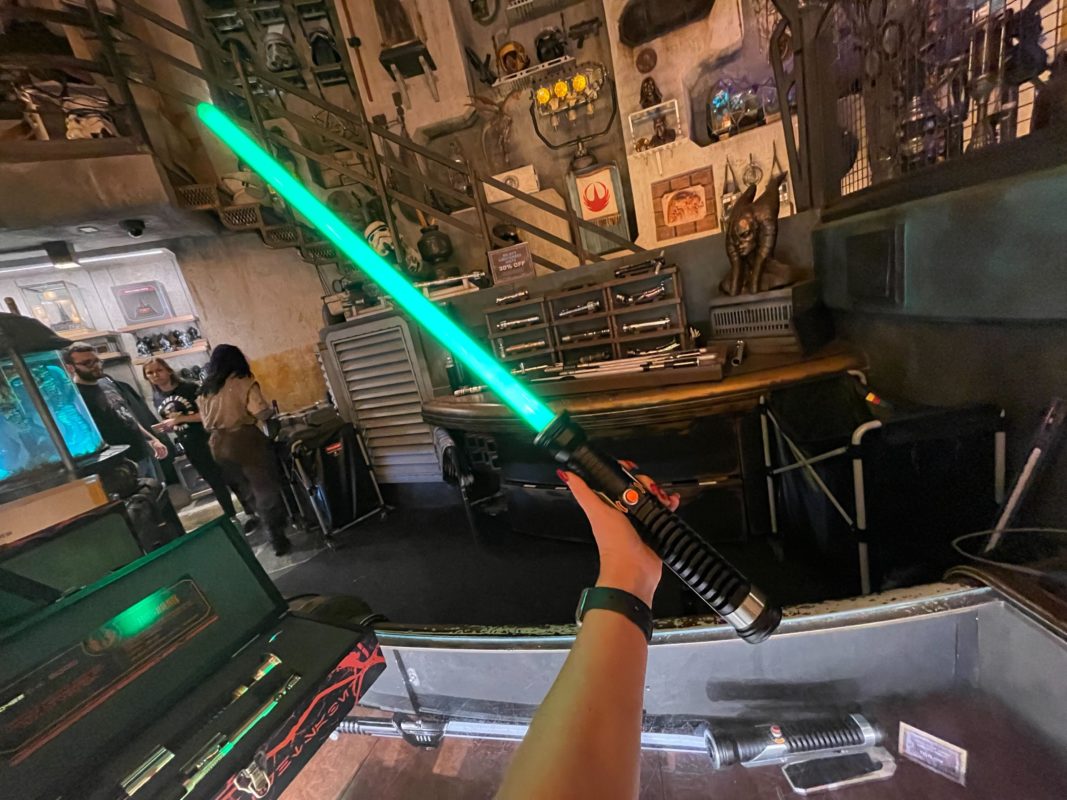 Qui-Gon Jinn’s Legacy Lightsaber has finally arrived at Disney’s Hollywood Studios, harnessing the power of the Force inside Dok-Ondar’s Den of Antiquities.

The lightsaber’s green blade color makes this truly recognizable as Qui-Gon’s own. However, as with all Legacy Lightsaber hilts, the blades are sold separately. The Kyber Crystal that determines the color of the lightsaber is part of the hilt, so the blades are interchangeable.

Qui-Gon Jinn only made an appearance in “Star Wars Episode I: The Phantom Menace” as Obi-Wan Kenobi’s Master, but his character is still widely beloved to this day. Jinn used this single-blade lightsaber until the Battle of Naboo, where he was mortally wounded by Darth Maul.

After misplacing his own weapon, Jinn’s apprentice Obi-Wan Kenobi used this lightsaber to kill Maul. After the battle, the weapon was returned to the Jedi Temple.

The latest Legacy Lightsaber was revealed at Star Wars Celebration in May 2022, and was first spotted in Disneyland Park in November, but our latest stop into Dok-Ondar’s Den of Antiquities uncovered this sought-after replica rarity for the first time in the Walt Disney World Resort.

For more new Legacy Lightsabers, Count Dooku’s Jedi Lightsaber is available at Dok-Ondar’s Den of Antiquities at Disney’s Hollywood Studios (Dooku was Jinn’s Jedi Master when he was part of the Order). A new version of the Cal Kestis Legacy Lightsaber hilt is available with pre-orders of the “Star Wars Jedi: Survivor” Collector’s Edition.

Will you be adding Qui-Gon Jinn’s lightsaber hilt to your collection? Let us know in the comments below!

Dok-Ondar’s Den of Antiquities is part of Star Wars: Galaxy’s Edge. The in-universe story is that the shop is run by infamous collector Dok-Ondar, an Ilthorian. He is represented with an animatronic in the shop but is often “out of town” procuring goods (which is to say that when the animatronic isn’t functioning correctly, they draw a curtain around it). Dok-Ondar hawks a selection of suspiciously-garnered goods, including Sith and Jedi holocrons, lightsabers, Camtonos, all kinds of currency from around the galaxy, and more.

You can even pick up a plush version of Dok-Ondar at Toydarian Toymakers in the nearby Black Spire Market.

See Dok-Ondar in action and a tour of his shop in our video below.

Star Wars: Galaxy’s Edge opened at Disney’s Hollywood Studios in 2019. The land has two rides, Millennium Falcon: Smugglers Run and Rise of the Resistance. There’s a themed bar called Oga’s Cantina, as well as quick-service venues. Dok-Ondar’s Den of Antiquities is the largest traditional store in the land but there are lots of smaller merchandise venues, including kiosks and the shops in the Market.

For an enhanced merchandise experience, guests can also reserve times to build a lightsaber at Savi’s Handbuilt Lightsabers or a droid at Droid Depot (purchases are required for participation at these locations, but Droid Depot also offers a regular shop section for accessories and more.