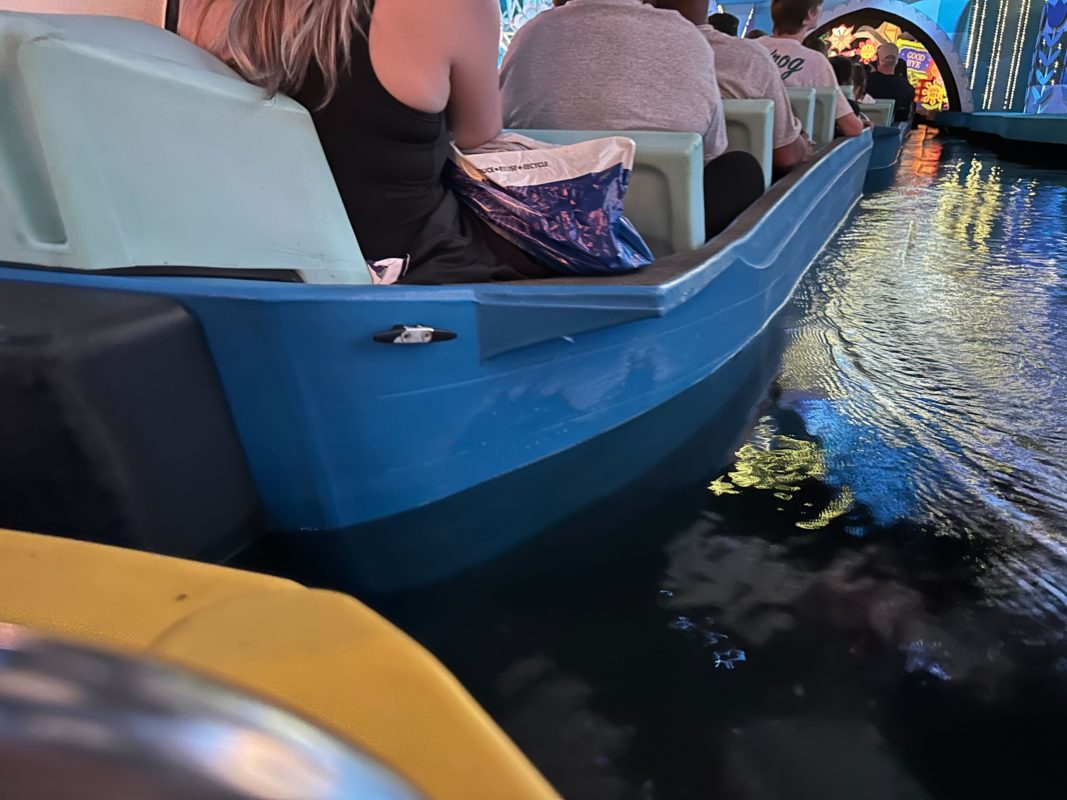 Walt Disney World has listened to the public scrutiny over the dirty state of the “it’s a small world” boats and given them a nice scrub.

The sides of the boats have very clearly been wiped, scrubbed, and washed, with most of the grime missing from the plastic sides.

The insides could still use some love for sure, with black grime from guests visible still on the front.

Very clear scrub marks and what appears to be white residue from cleaning products are visible.

The above photo shows the state of the boats from our original report on December 26, 2022. The pattern extends well above the water line of the boat, beyond where contaminants from the water could sink in. These are just plain filthy and disgusting, looking similar to abandoned cars in a post-apocalyptic wasteland rather than a happy boat ride through the countries of the world.

While “it’s a small world” at the Magic Kingdom doesn’t go outside like its Disneyland counterpart, it still accumulates grime from the day-to-day cycling. Combined with other issues, like dirty PeopleMover seats and mold in Toy Story Land, guests have called the overall cleanliness at the parks into question.

As Walt Disney World seems to have ended its transition period out of the COVID-19 pandemic and returned to normal operations, we will be resuming our Maintenance Reports in January 2023, which we put on hiatus while the resort focused on the pandemic.

“it’s a small world” had a major exterior refurbishment in 2020 and a three-day interior refurbishment in July 2021. After the refurbishment, the interior façade around the load area was gradually repainted with bright colors replacing most of the white and gold. The clock tower was the first to be repainted and reveal a new look. The “5” and “0” were given a different shade of gold in celebration of the 50th anniversary of the Magic Kingdom.

Some of the gold and white was brought back later into the repainting. It was seemingly completed in September 2021.

Pinocchio Village Haus, a restaurant that has windows overlooking the load area of “it’s a small world” (pictured above), has been serving treats themed to the attraction as part of the 50th anniversary. The latest is a Polynesian-inspired Malasada dessert featuring the “Aloha” sign from the ride’s finale.

A further refurbishment is not currently on the calendar at Walt Disney World, but the ride is set to receive an inclusivity update this year. Dolls in wheelchairs will be added to the attraction, following the lead set by Disneyland this past year.

Are you glad to see the boats cleaned? Let us know in the comments below!

Did you know the iconic “it’s a small world” theme song has been inducted into the Library of Congress’ National Recording Registry? Love it or hate it, the earworm, composed by the Sherman Brothers, is a recognizable classic in American history.