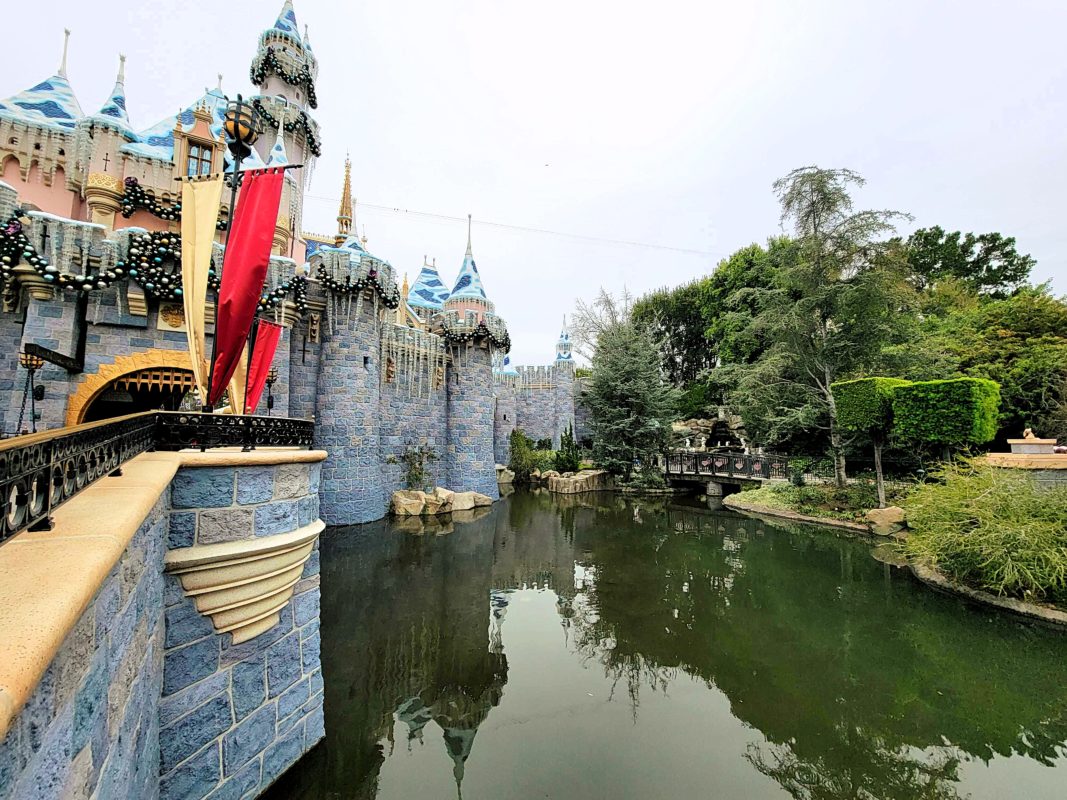 On a recent visit to Disneyland, we noticed that new fountains installed in the Disneyland Moat in advance of the 100th Anniversary celebration of The Walt Disney Company.

In the center of the image, you will notice a small, green, circular object that can be seen rising above the surface of the water. That is one of the two new fountains installed for the upcoming celebration.

Beyond the outer rim, which boasts 12 nozzles, there is a ring of six additional nozzles that are directed at a slightly different angle. In the middle of the ring, there is one large nozzle. This arrangement of nozzles can be found on the right-hand side of the moat as you walk towards Sleeping Beauty Castle.

It is unclear if any of the nozzles in the fountain will move as some do in “World of Color” or if they will remain fixed in place, with only the height being adjusted according to the varying pressure.

The other set of nozzles can be spotted in the water on the left-hand side of the castle.

This past October, Disney announced that to mark the anniversary, Sleeping Beauty Castle at Disneyland Park will receive special decorations to reflect the theme of wonder — the centennial’s tagline. The castle will be adorned with platinum banners and bunting, featuring a cabochon depicting the three Good Fairies. The castle will be further illuminated with shimmering pixie dust. A wishing star will illuminate from the tower above.

The Walt Disney Company’s 100th anniversary celebration will commence on January 27th at Disneyland Resort in Anaheim, California. Guests will be able to mark this historic occasion by experiencing the grand opening of the new Mickey & Minnie’s Runaway Railway attraction, as well as two all-new nighttime spectaculars: World of Color – One at Disney California Adventure Park and Wondrous Journeys at Disneyland Park.

Recently, Disney announced that “Wondrous Journeys” will be a new nighttime spectacular at Sleeping Beauty Castle. The show, which will run 13 minutes, will pay homage to every Walt Disney Animation Studios film to date, taking guests on a journey filled with artistry, music, and storytelling. State-of-the-art projection effects will be seen on Main Street, U.S.A., Sleeping Beauty Castle, the façade of “it’s a small world,” and the Rivers of America. On select nights, the show will add fireworks in the sky above Disneyland. It will also feature a new song, “It’s Wondrous.”

Check out some of the other stories we recently reported on surrounding The Walt Disney Company’s centennial celebration:

Are you excited about all the upcoming 100th anniversary activities this year? Let us know in the comments below.