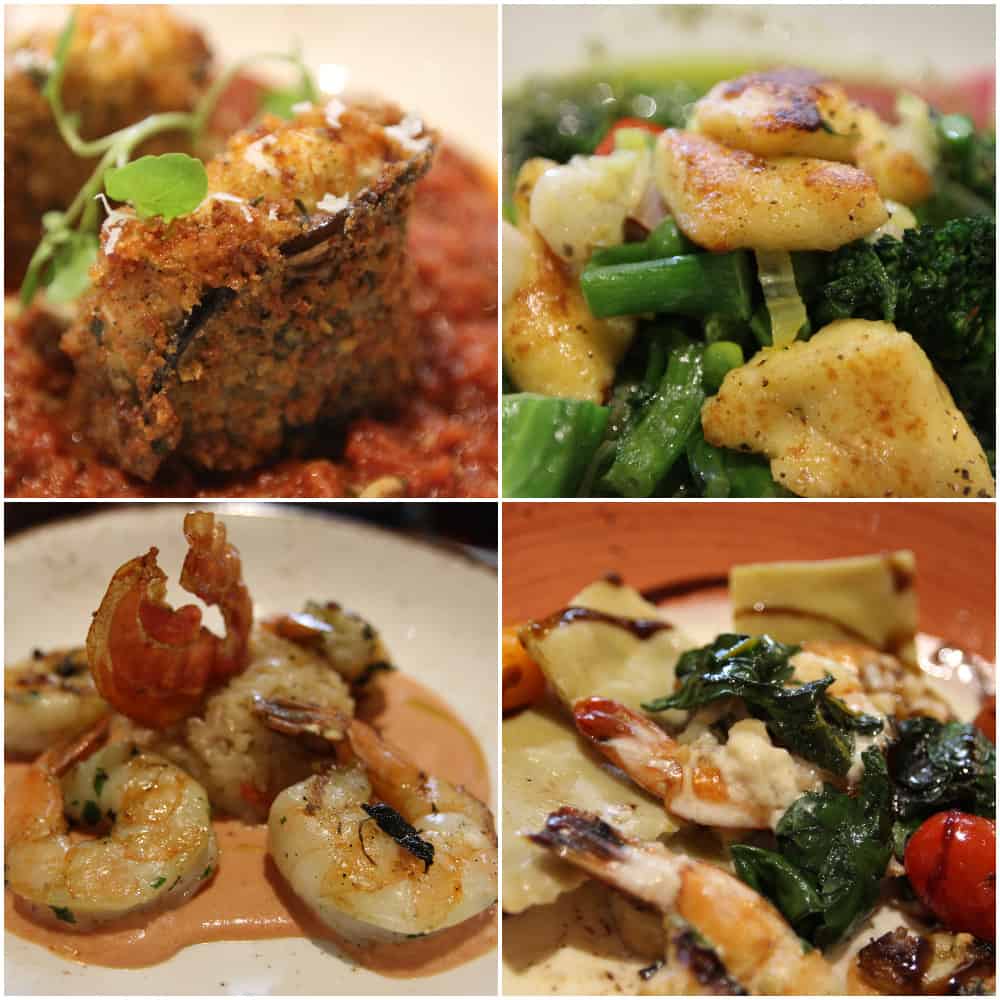 “I just ate at Tony’s and boy is my mouth tired!” – Tom Corless following the Roman-Style Steak 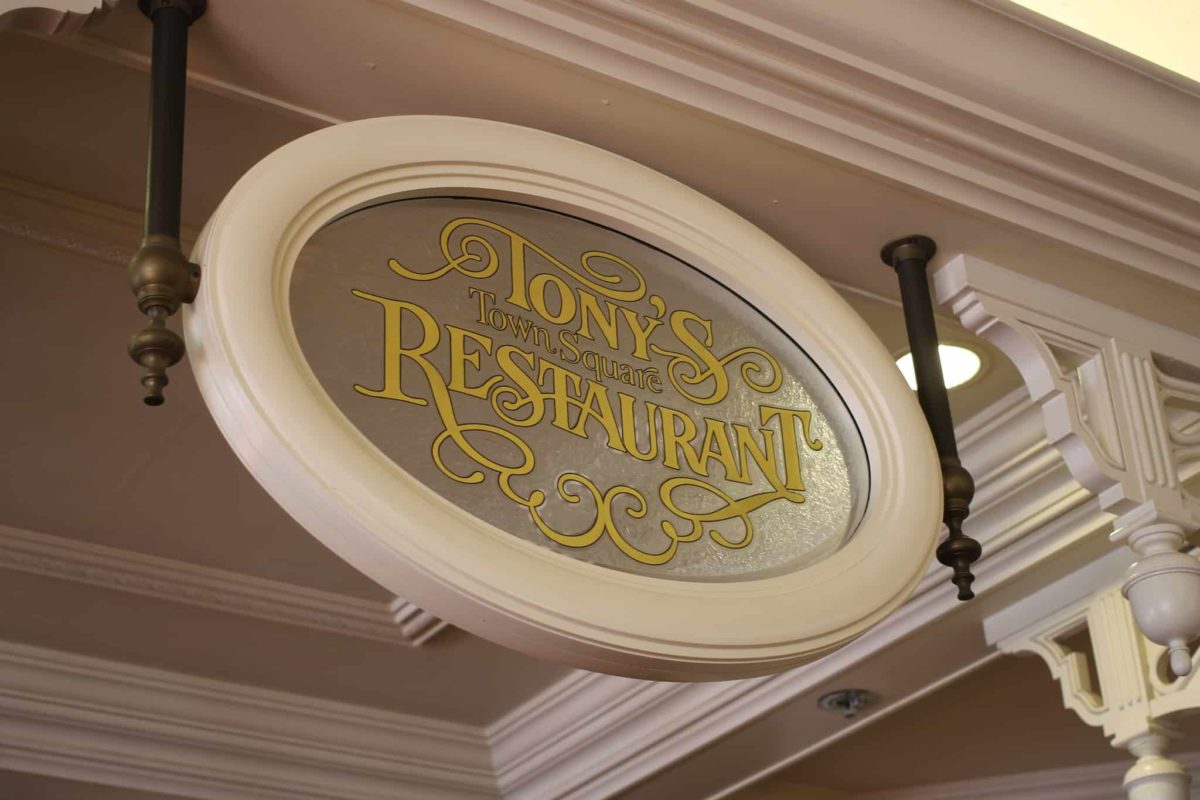 Tony’s Town Square Restaurant is a table service location inside of The Magic Kingdom. This Italian restaurant is themed to the well-known restaurant and pasta scene from Walt Disney’s classic Lady & The Tramp. For as wonderful and timeless that the movie is, the restaurant is one of the most perplexing we’ve been to. Tony’s menu takes a stab at classic Italian entrees, pizzas, and now grilled shrimp. We haven’t particularly been fans of the restaurant in past years, but felt a visit was mandatory due to numerous menu changes. You may remember late last year when the Italian Trio was added or even earlier when an entree actually impressed. Unfortunately the pork chop is gone, in place we have seemingly endless options for shrimp, chicken and vegetables. Roll over and let’s dig-in. 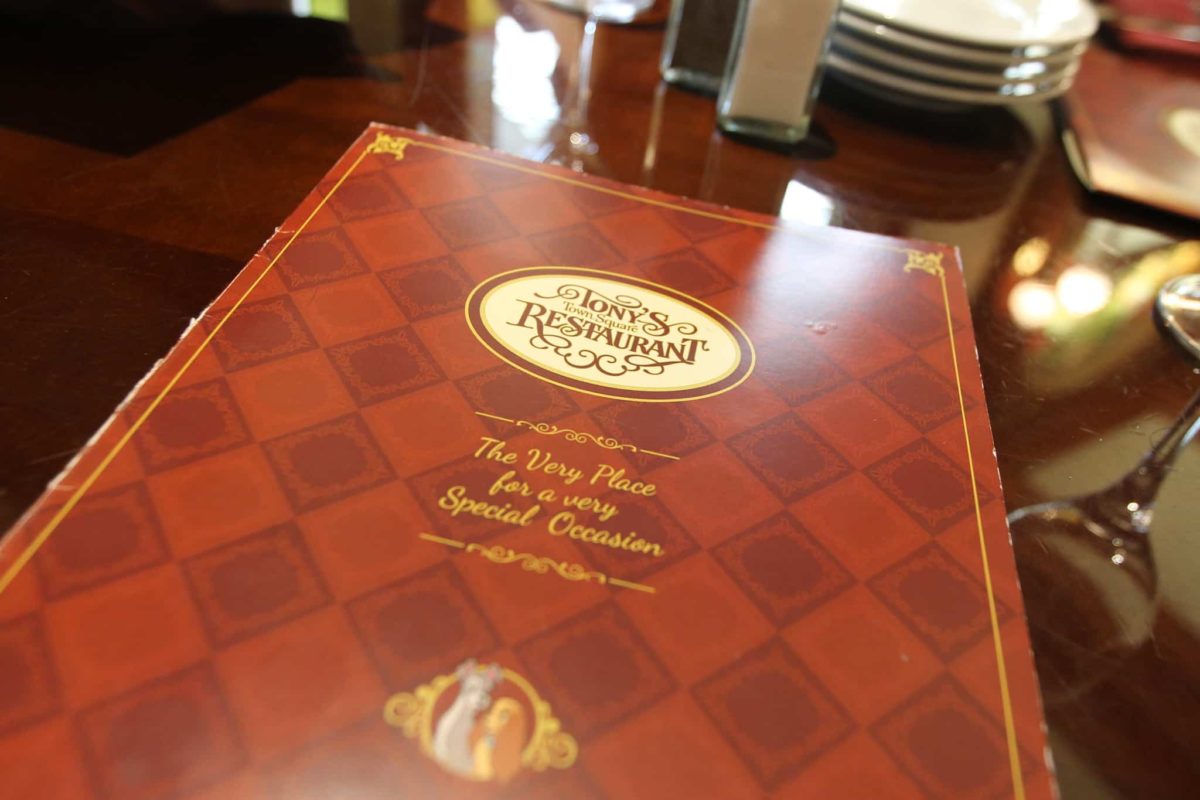 Dinner starts with a nice bread service, lightly salted and accompanied with a traditional olive oil. 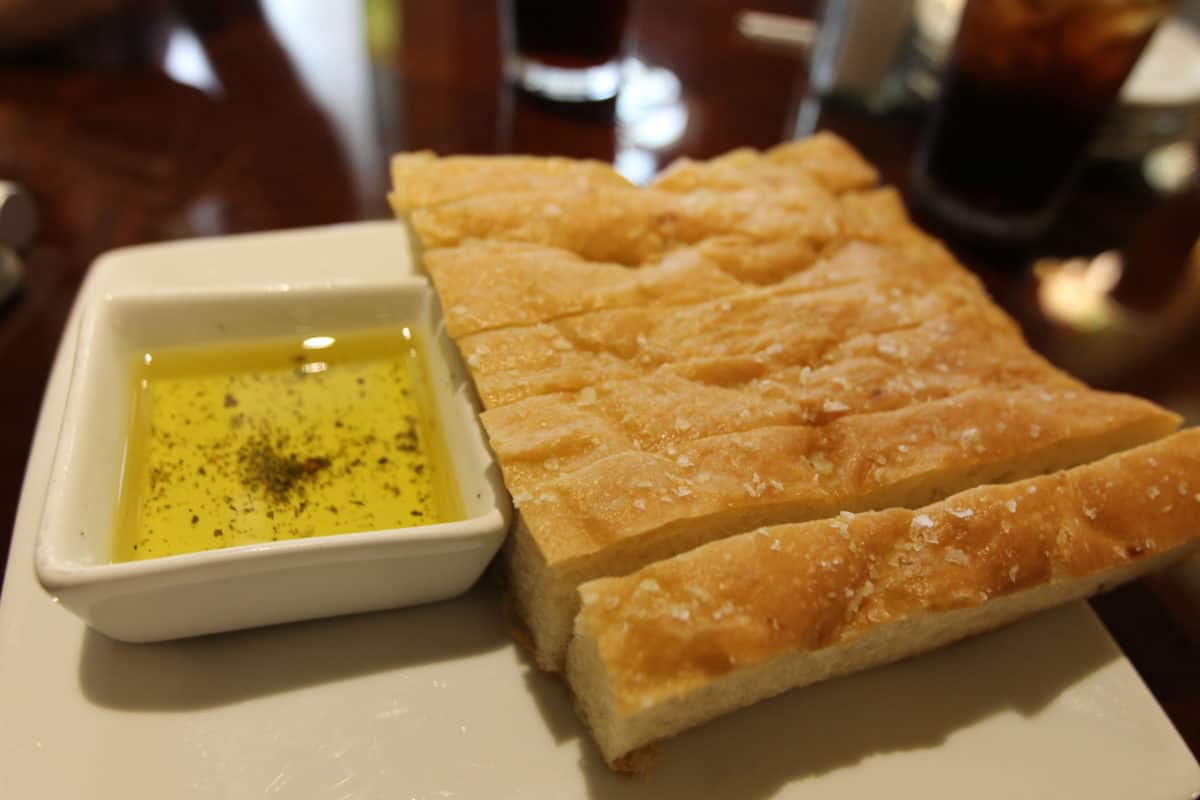 Tony’s has been serving alcohol since 2016 when the spirits were introduced to four Magic Kingdom table service locations. This past week The Crystal Palace and The Plaza Restaurant jumped on the bandwagon and started offering alcohol as well. What better time to order one of the offered beverages, right? 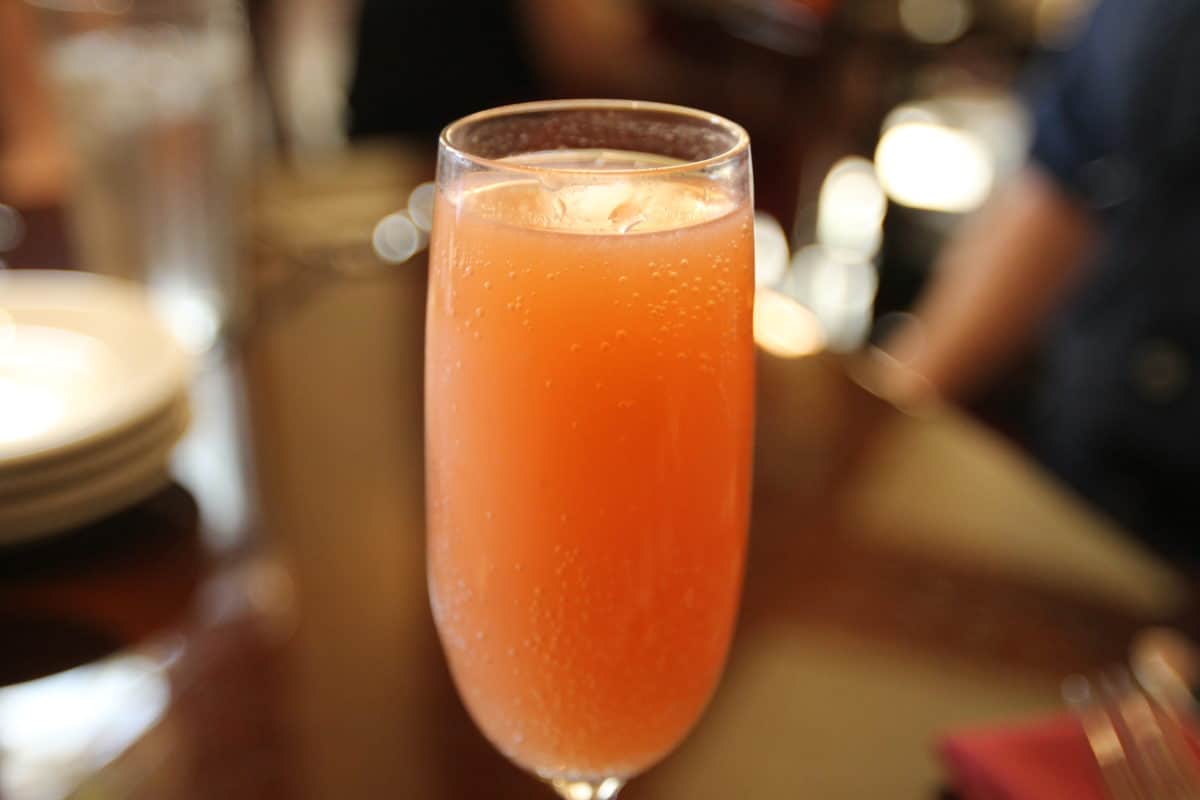 Not only is the smell horrible, but the taste is par for the course. It’s not good, and we’ve had some pretty terrible drinks in the past. You’re better off with a canned beer that you know the quality is standardized across the board. 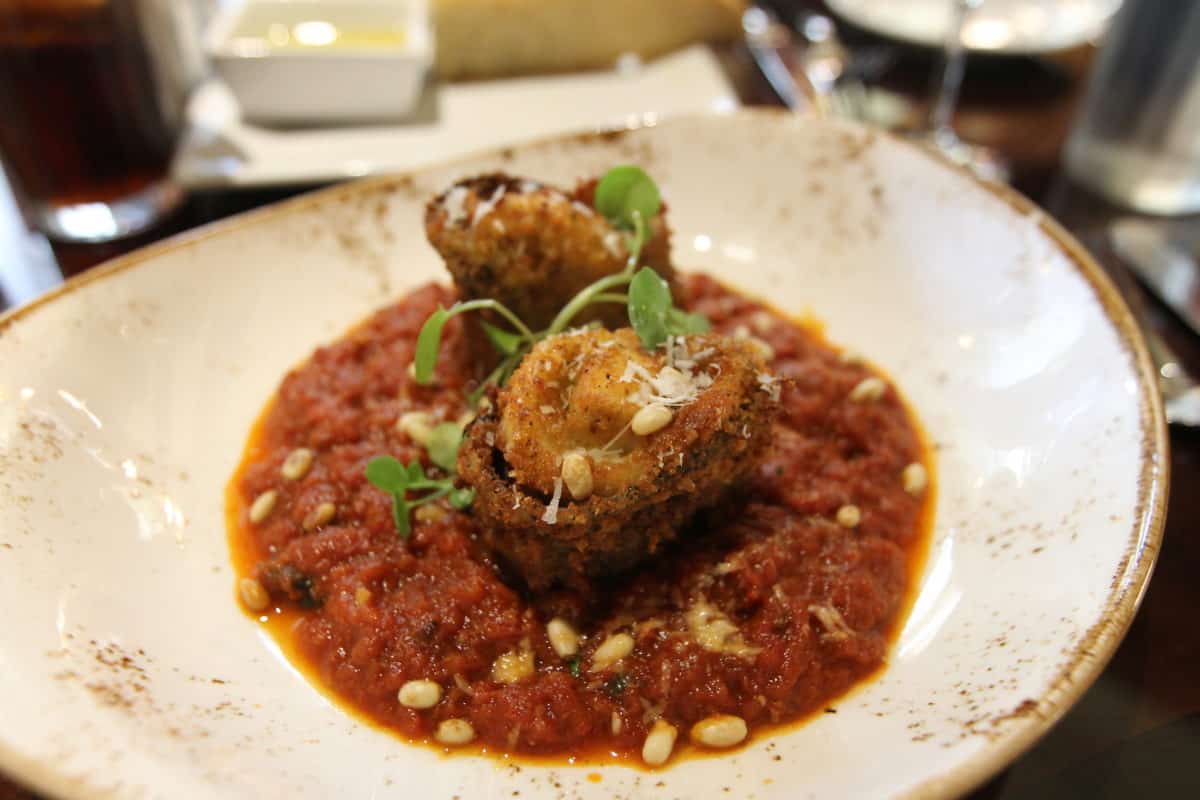 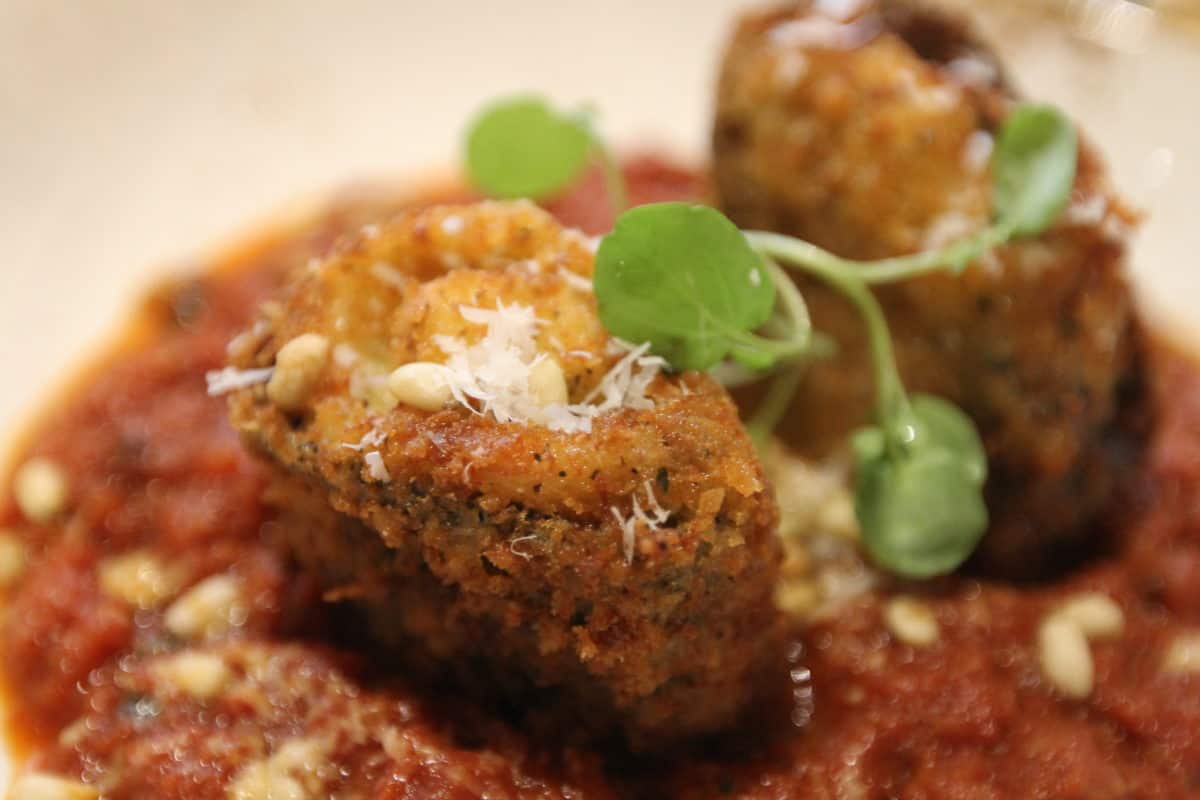 Honestly, these weren’t too bad. The red sauce (from a jar) wasn’t even that bad! There’s plenty of cheese and perfectly fried eggplant for a bunch of tasty bites. A unique and very good starter option (and I believe the only dish at Walt Disney World with pine nuts). 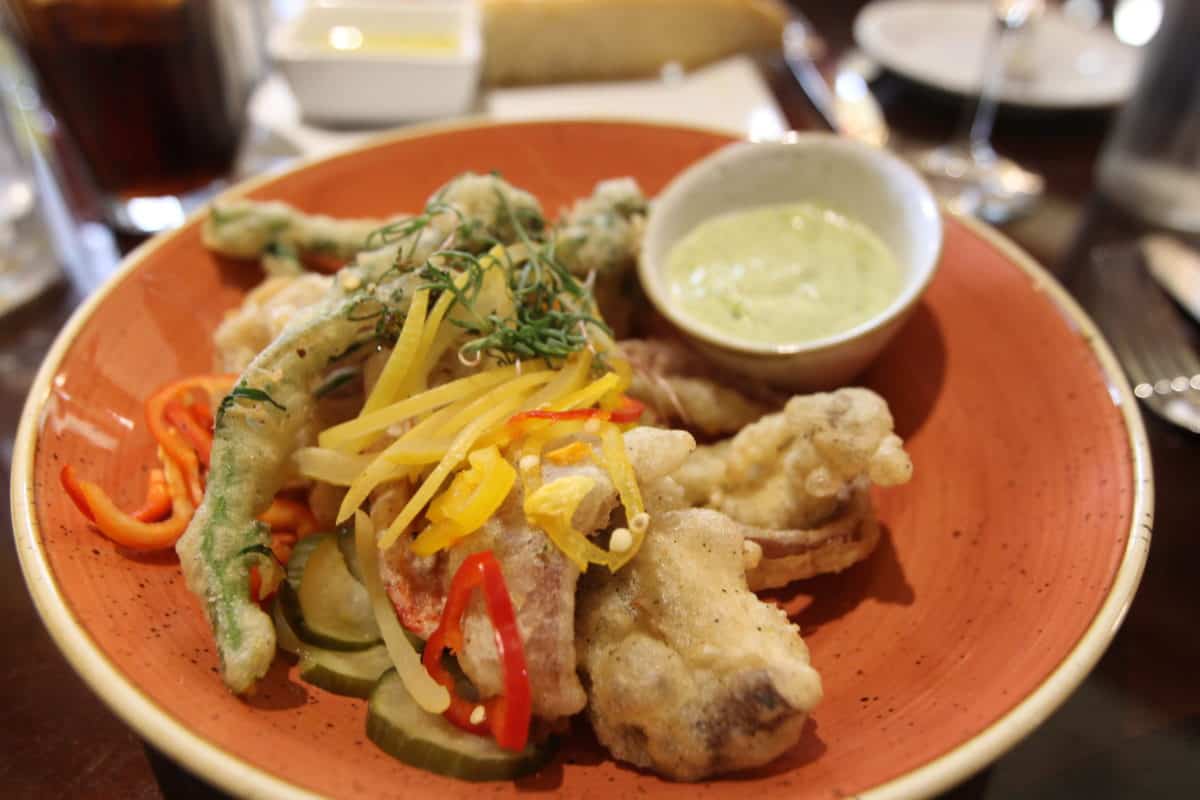 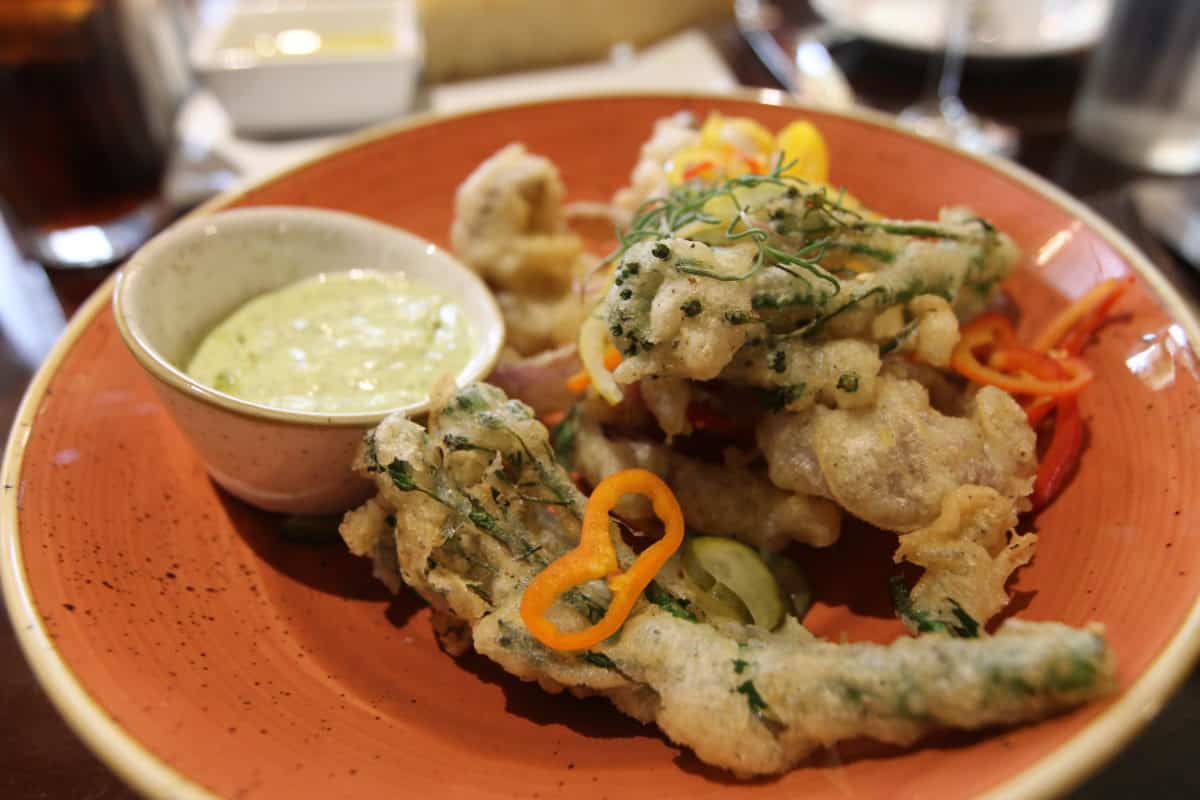 There’s peppers, broccoli, and onions that make up the vegetable selection here. They’re all tempura battered and deep fried giving enough of a crisp without taking away the flavor from the vegetables. The herb aioli added a much needed accompaniment and everything was pretty good. No complaints here, we’re two for two with appetizers, an new personal best for Tony’s. 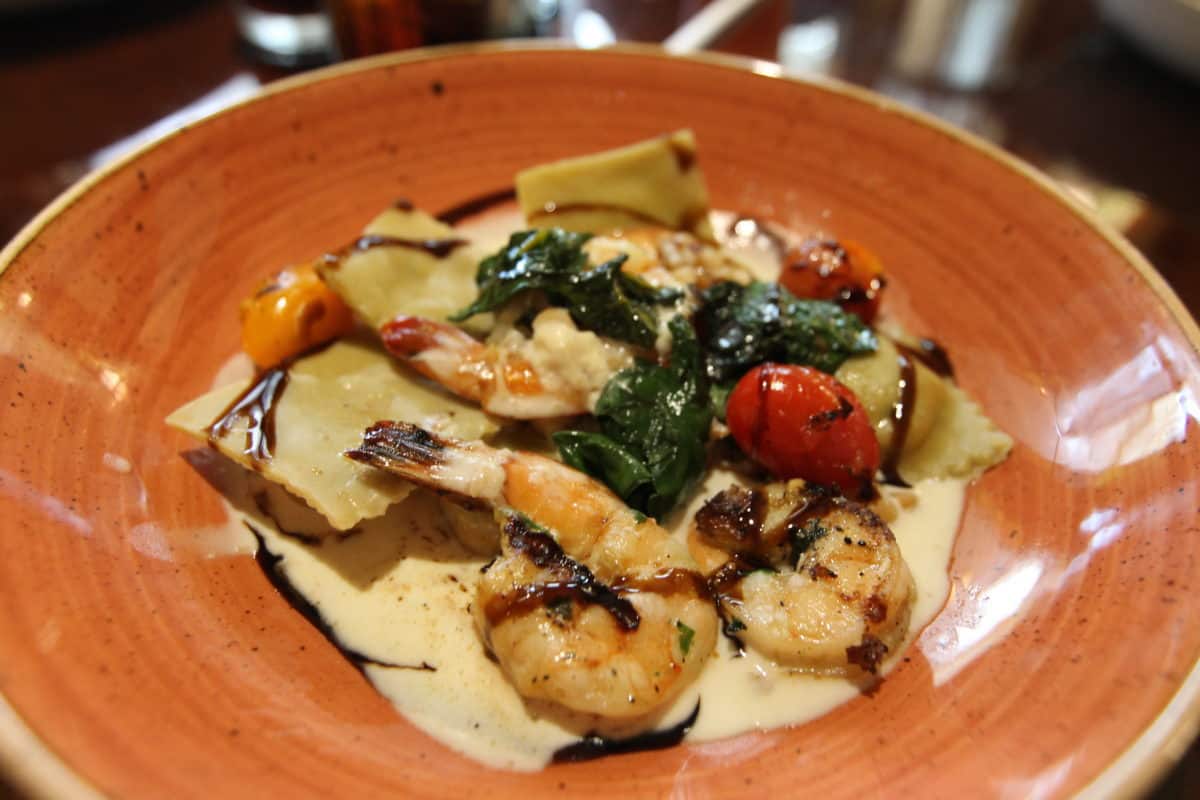 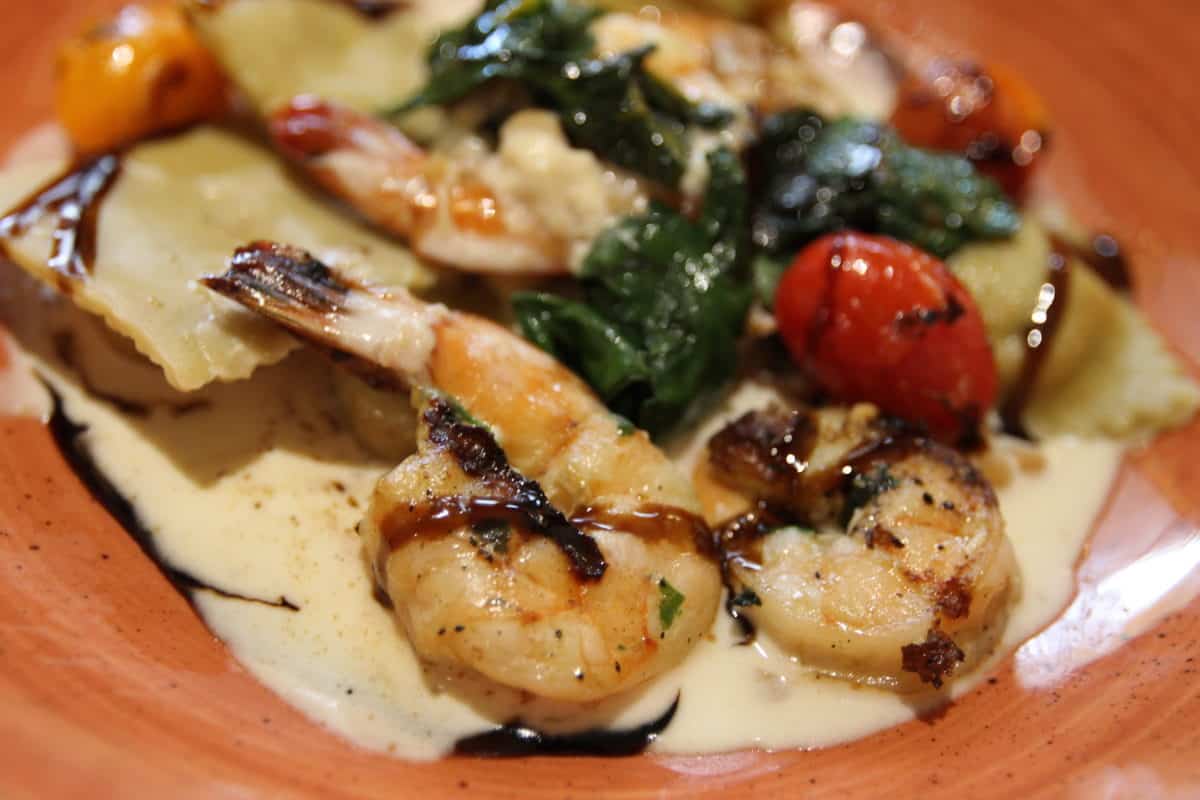 Online, the official WDW website says this entree is $29, the printed menu says $30. This entree is available with chicken for $27 or without any protein for $22. We opted for shrimp, which were cooked very well, albeit a bit smaller than the jumbo shrimp entree we also ordered. The ravioli were al dente and had a nice cheese filling. There’s nothing special going on here, but there’s also nothing too terrible. For $30 you would expect a few more ravioli than the minimal amount received. As it stands this is a horribly priced entree that would do better being $5 less across the board. Understanding that a majority of Tony’s clientele are using the Disney Dining Plan, we don’t expect the price to be adjusted. At least Tables in Wonderland still works.. 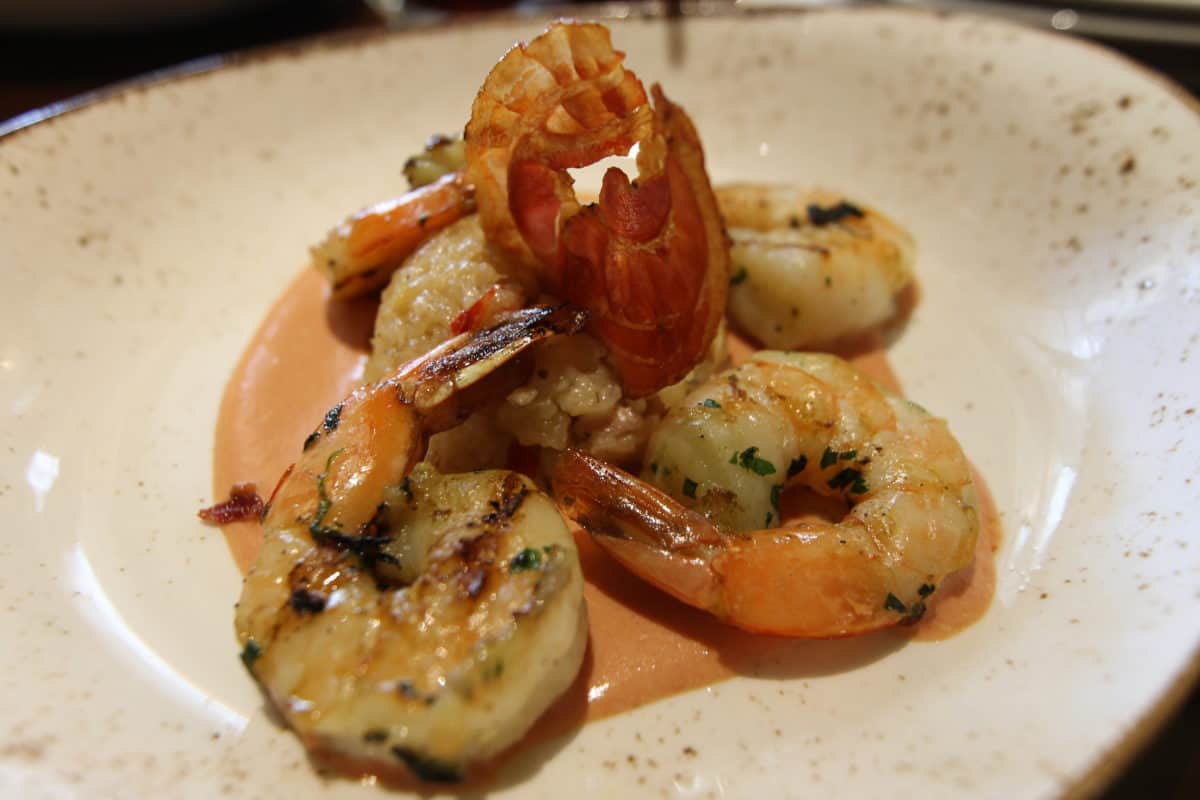 Online the official WDW website says this entree is $28, the printed menu says $29. There’s four massive shrimp surrounding a pile of fine risotto. Yes, that’s bacon on top. Listed as crispy Pancetta, but it’s clearly just bacon. You’re looking at almost $7 a shrimp here, so even if they were life-changing it’s hard to justify spending that much for such a small portion. The shrimp are cooked well and have a nice crispness to each bite. Everything is fine here, but nowhere near worth the money. Even the OK dishes at Tony’s are only going to feel like a good option if you’re on the Disney Dining Plan. 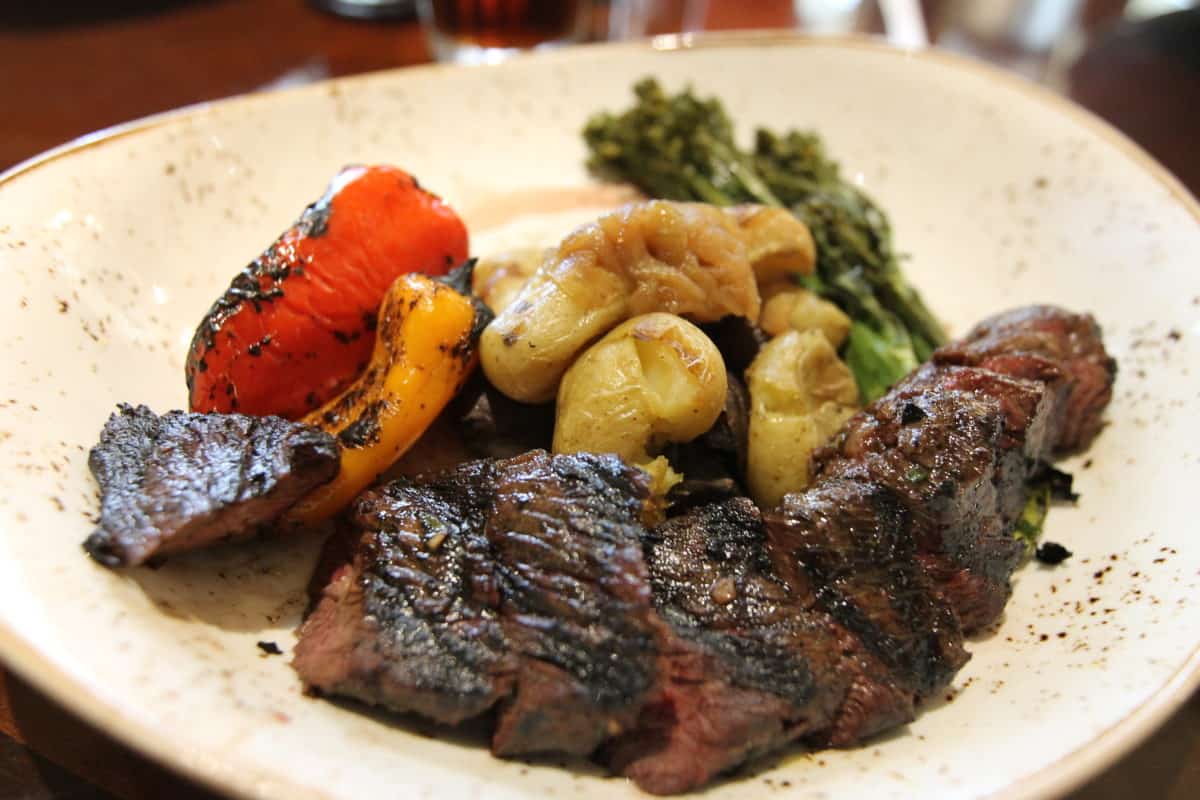 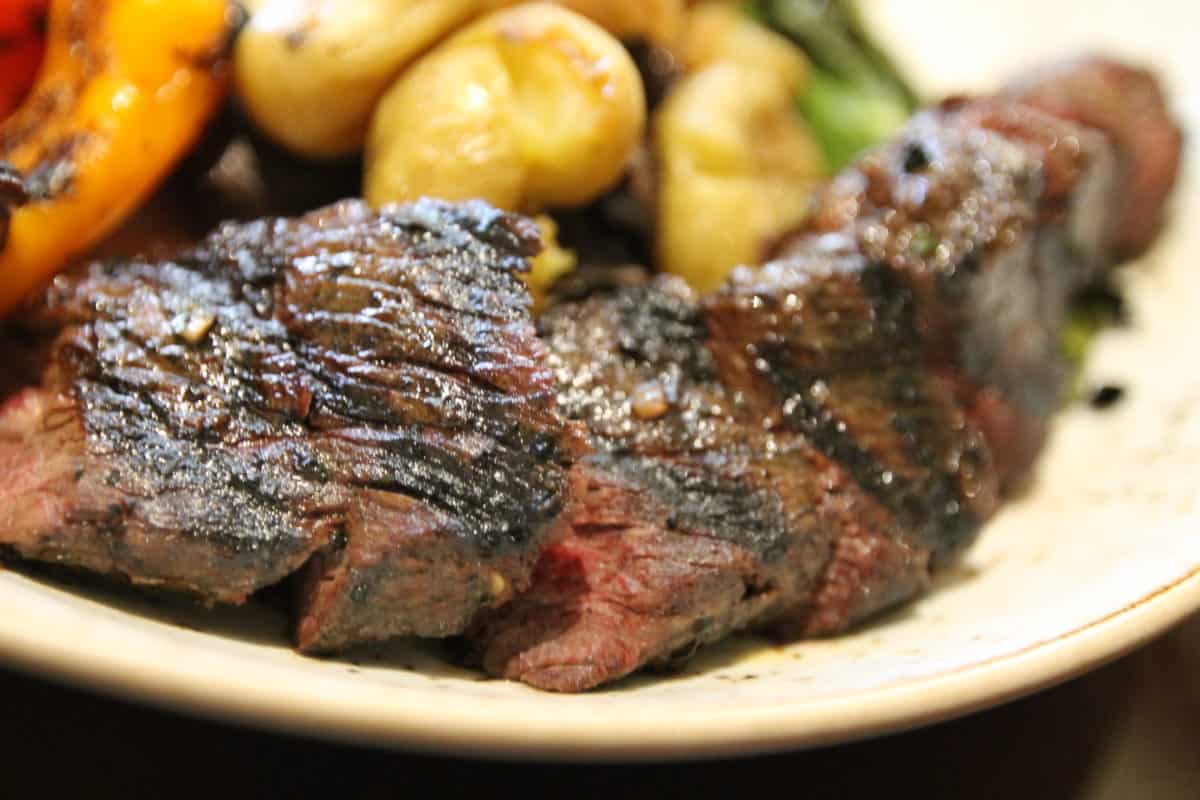 We ordered this one to be cooked medium. A hanger cut of steak isn’t meant to be a necessarily chewy piece, but then again, chef Tony Ragu is pretty unorthodox (this is a joke and not a real chef). We chewed, and we chewed, and we chewed and eventually got the steak down. There’s not a lot of flavor from the steak other than the “hey this is beef” idea, virtually flavorless and immediately forgettable. The vegetables served alongside are the same ones we saw earlier but they’re not deep fried making them immediately less favorable. They’re still good and fresh, but didn’t help bring anything to the boring steak. 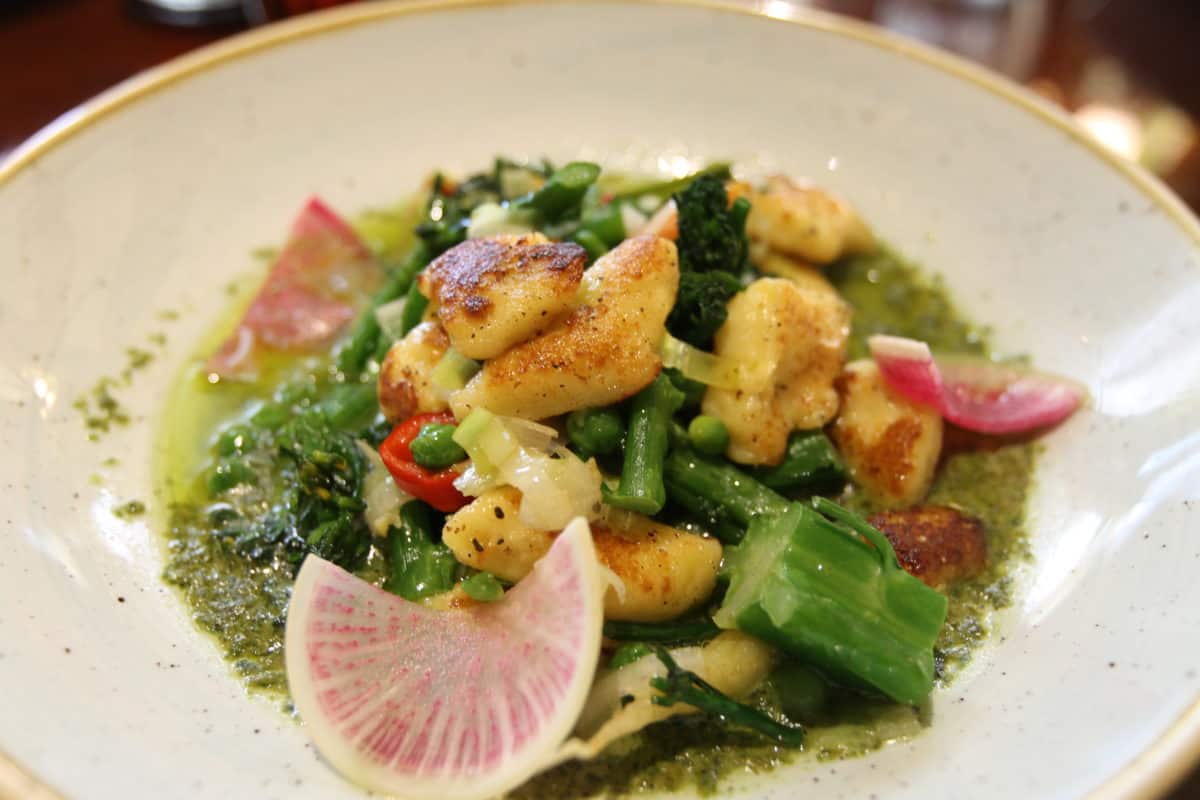 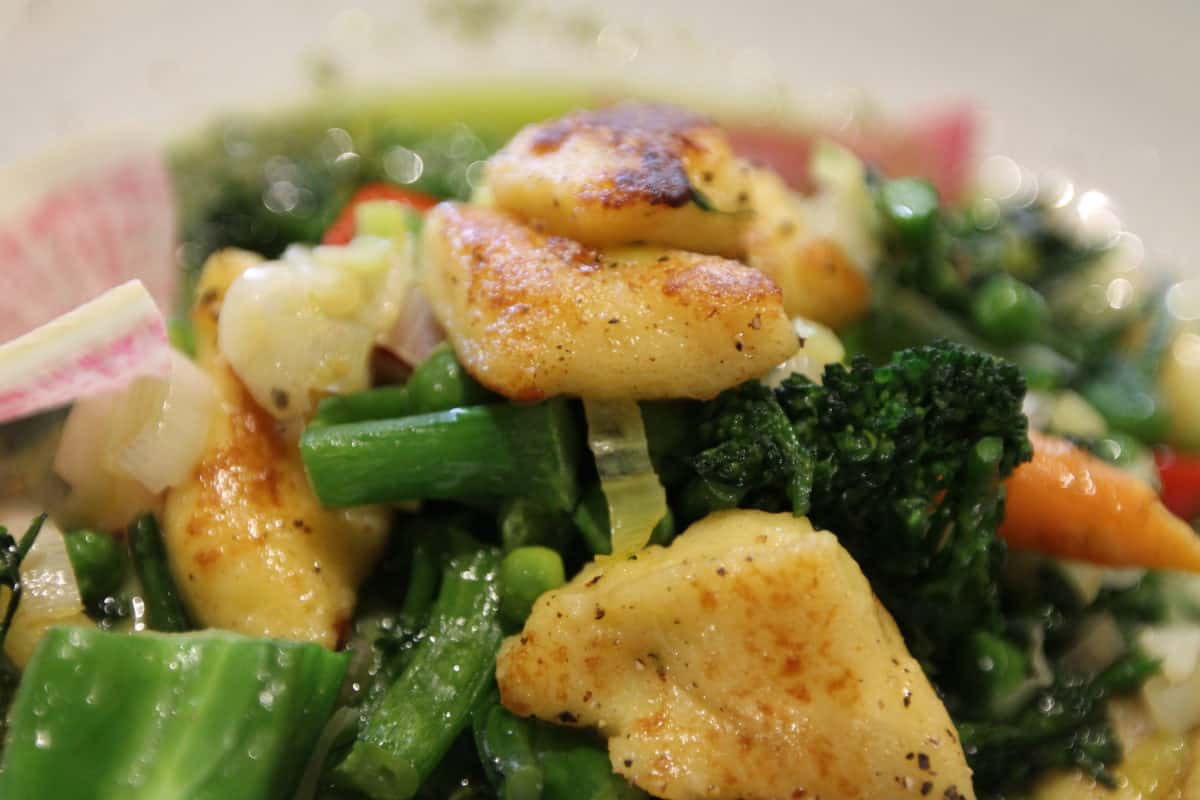 This entree is available with grilled chicken for $26 and jumbo shrimp for $28. Maybe we should have sprung for the added chicken here because $22 for about 15 pieces of gnocchi on a bed of Jolly Green Giant green beans and other assorted canned vegetables wasn’t doing the trick. The only piece of this that Tony’s got right was the look of the basil pesto sauce, but totally missed the mark on flavor. After a few bites we all were very much done with this dish. It’s not good and quite a bit of money for the meaningless portion of gnocchi.

I’m still not sure anyone should visit Tony’s under any circumstances. Yes, for some it’s a nostalgia thing since the restaurant has been in the park for decades, but despite some effort, it hasn’t improved in any of that time. Our typical meal at Tony’s is bad, but this was a different kind of bad that didn’t revolve around entrees soaked in the often unenjoyable red sauce. Skipper Canteen is the same price point and offers a far superior meal, and I’d certainly take Liberty Tree Tavern, Plaza Restaurant, Be Our Guest, or even Crystal Palace over this. If you choose to end up at Tony’s, stick to the appetizers and pizzas to be safe.