With Disney Parks around the world closed for the foreseeable future, WDWNT is dipping into our archives of vintage parks materials for a look back into parks history! Today, we’re discovering EPCOT’s roots in “The Spirit of EPCOT Center,” a booklet given to cast members in 1982! 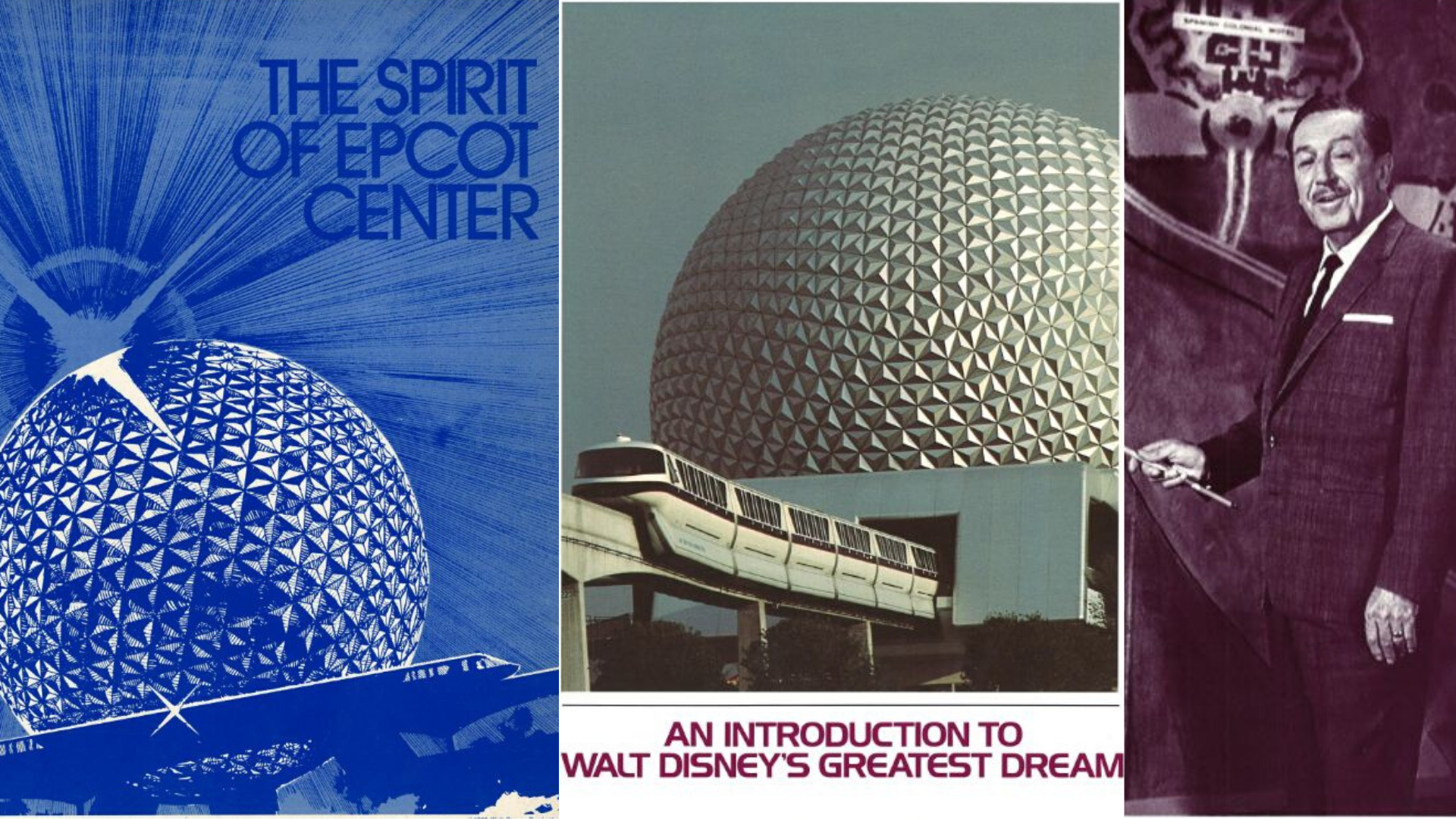 Note: This article will detail the booklet page by page, but WIGS Members will have access to download a full-resolution PDF of the entire thing. Head on over to Patreon.com/wdwnt to join WIGS, the WDWNT Inner Globe Society, for as little as $2 a month and unlock access to great content like this, and much more! 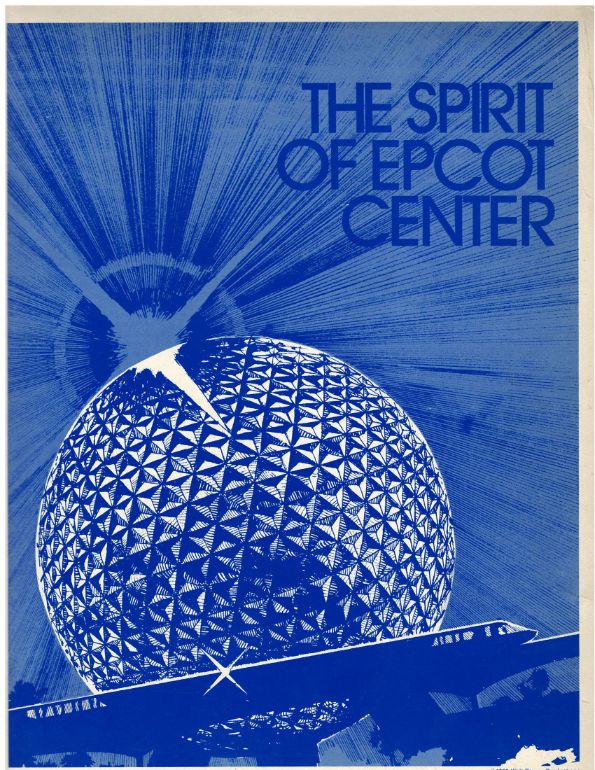 Given the all-encompassing nature of the booklet, it’s very likely that it was given to opening day cast members, as it is becomes very explanatory about the offerings at the park, likely to help cast answer guest questions from day one. 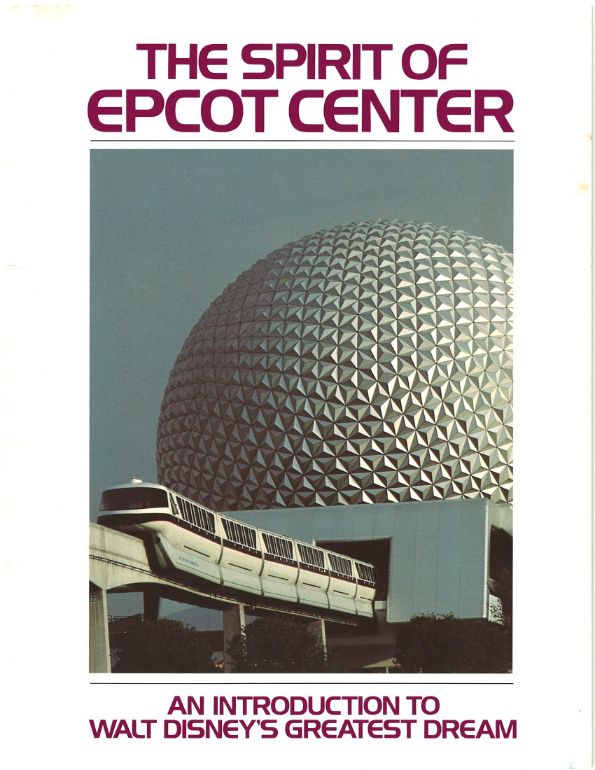 The booklet opens with a welcome letter from Disney Legend Dick Nunis, then the President of Walt Disney Productions’ Outdoor Recreation Division, which oversaw Walt Disney World and EPCOT Center at the time. 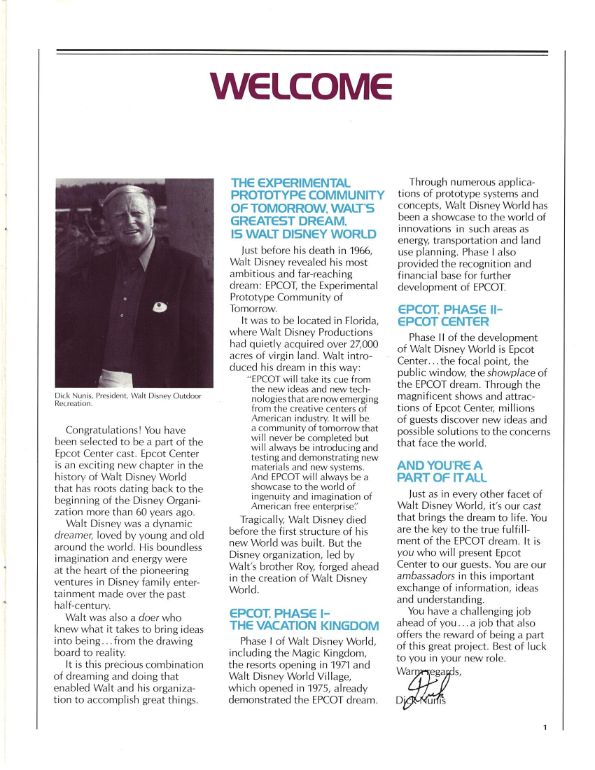 “Congratulations! You have been selected to be a part of the Epcot Center cast. Epcot Center is an exciting new chapter in the history of Walt Disney World that has roots dating back to the beginning of the Disney Organization more than 60 years ago.

Walt Disney was a dynamic dreamer, loved by young and old around the world. His boundless imagination and energy were at the heart of the pioneering ventures in Disney family entertainment made over the past half-century.

Walt was also a doer who knew what it takes to bring ideas into being… from the drawing board to reality.

It is this precious combination of dreaming and doing that enabled Walt and his organization to accomplish great things.”

Much like the rest of this booklet, the point of the introduction is to get cast members to believe in the ideas of EPCOT Center as strongly as management:

“Just as in every other facet of Walt Disney World, its our cast that brings the dream to life. You are the key to the true fulfillment of the EPCOT dream. It is you who will present Epcot Center to our guests. You are ambassadors in this important exchange of information, ideas and understanding.

You have a challenging job ahead of you… a job that also offers the reward of being a part of this great project. Best of luck to you in your new role.” 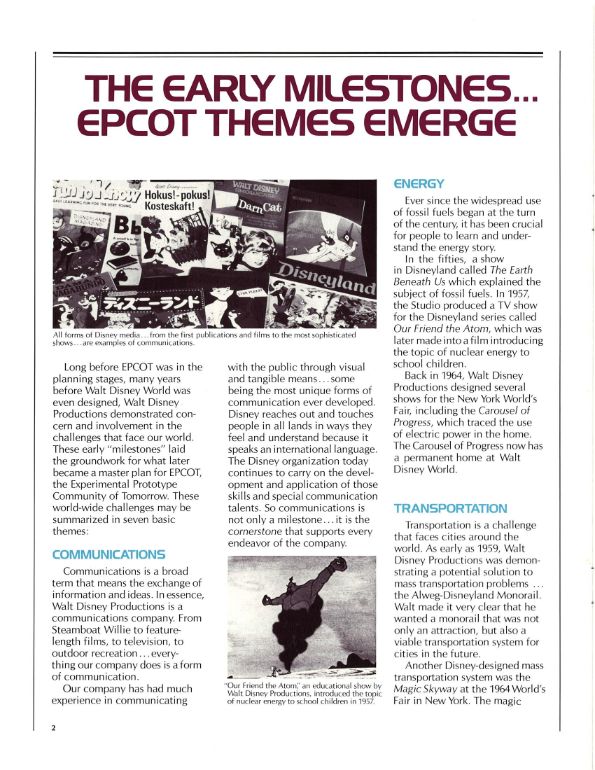 The following section attempts to contextualize how Disney’s history of educational entertainment has led to EPCOT Center, utilizing subjects throughout the park: Communications, Energy, Transportation, The Land, Imagination, Future Lifestyles, and International Understanding. 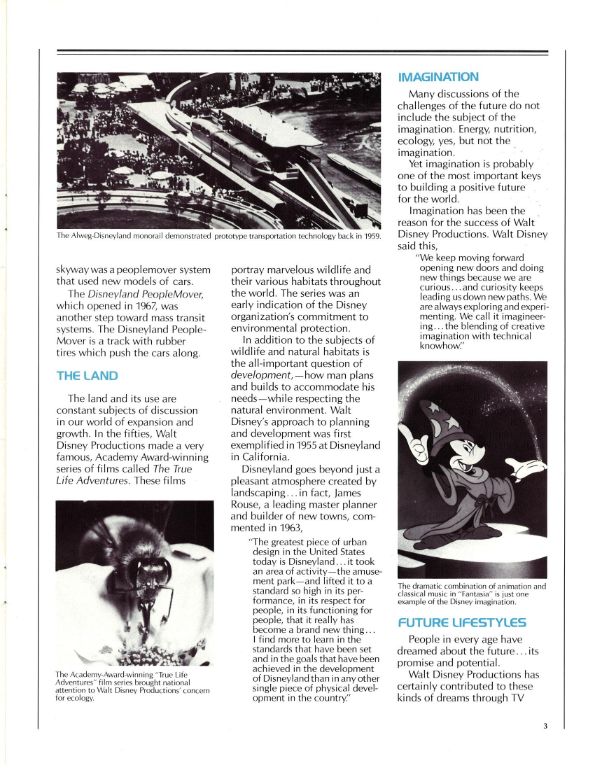 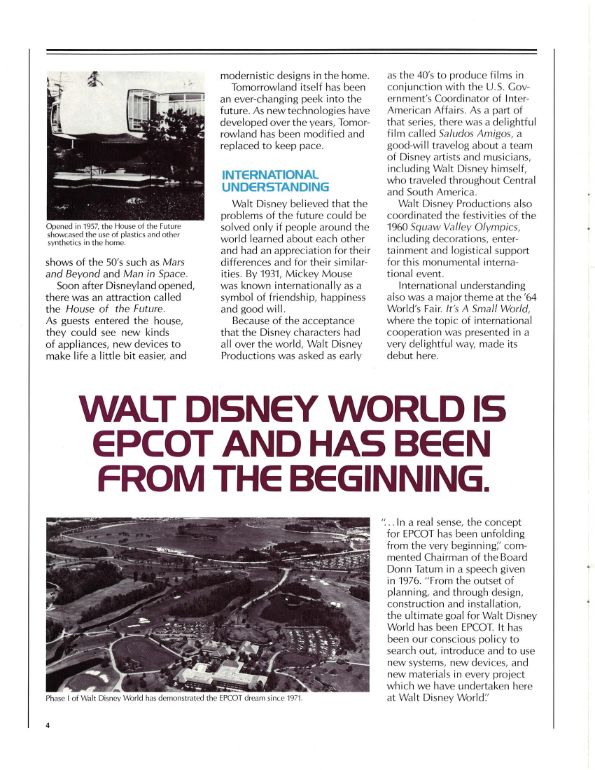 The booklet then specifically contextualizes Walt Disney World within Walt Disney’s dream of EPCOT, when he envisioned it as more than a vacation destination, but a whole community of the future. 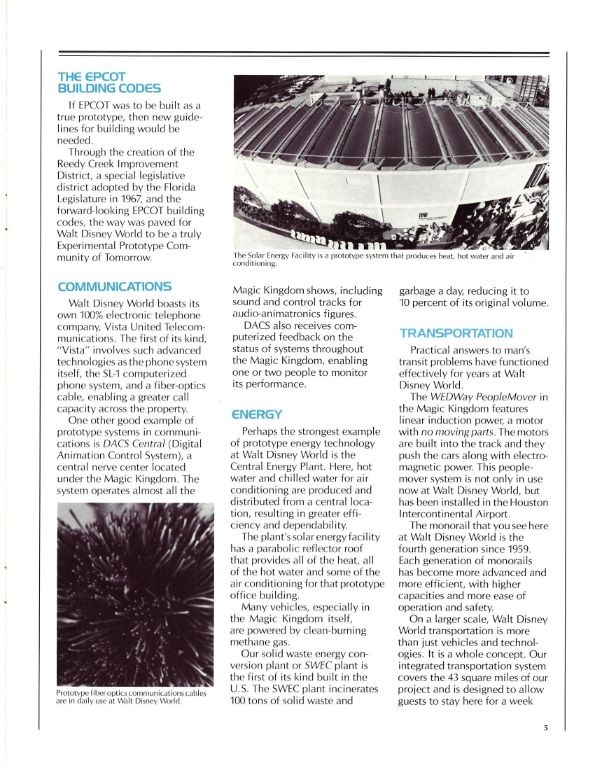 The same themes from the last section return to show the forward-thinking technology and practices already on display at the resort. 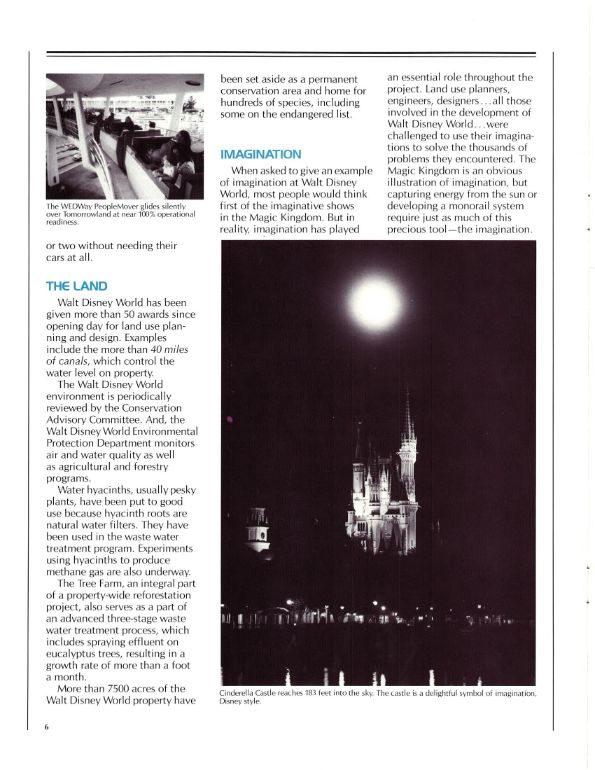 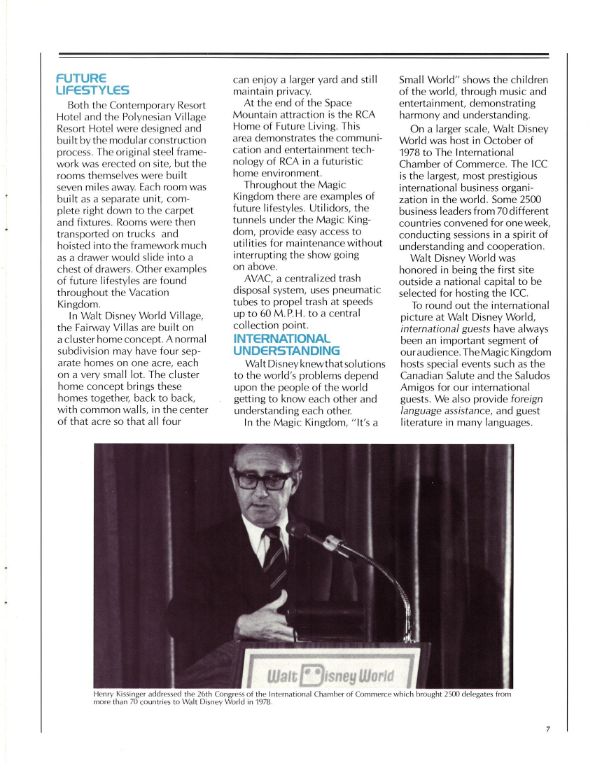 The next part discusses the attractions and restaurants at the park… but I’m guessing if you’re geeking out at an EPCOT Center cast member booklet like I am, you probably already know them well. 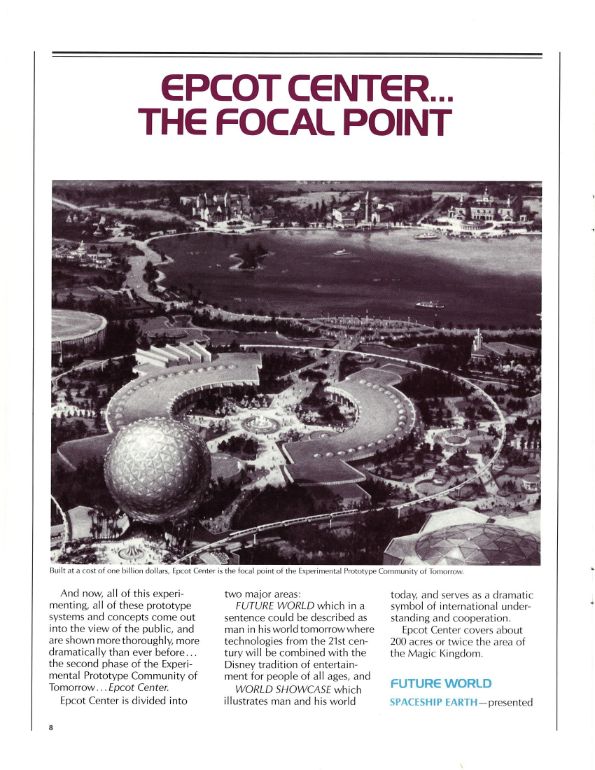 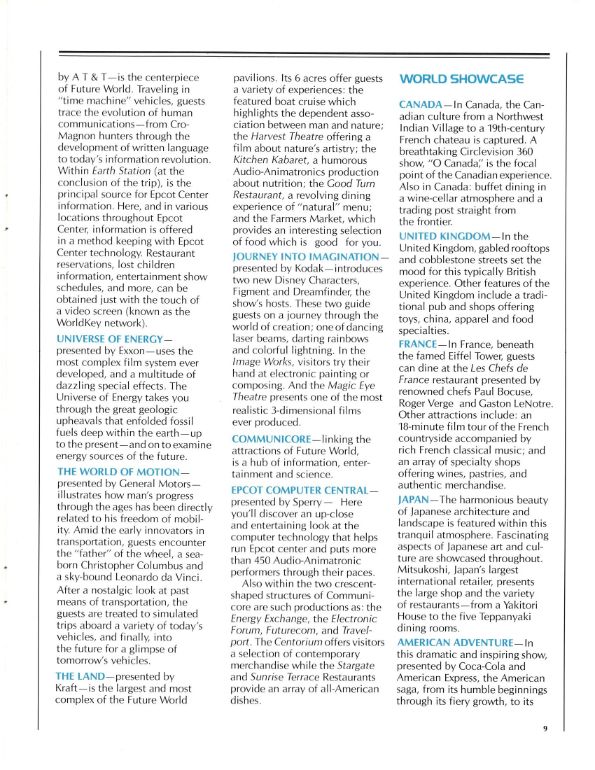 This section also refers to some attractions that ultimately didn’t come to fruition, such as the Rhine River Cruise (referenced here as the “German Rivers attraction”) and the Equatorial Africa, Israel, Venezuela, and Spain pavilions, along with upcoming attractions that were made, including Horizons, The Living Seas, Wonders of Life (described here as The Life and Health Pavilion), and the Morocco pavilion. 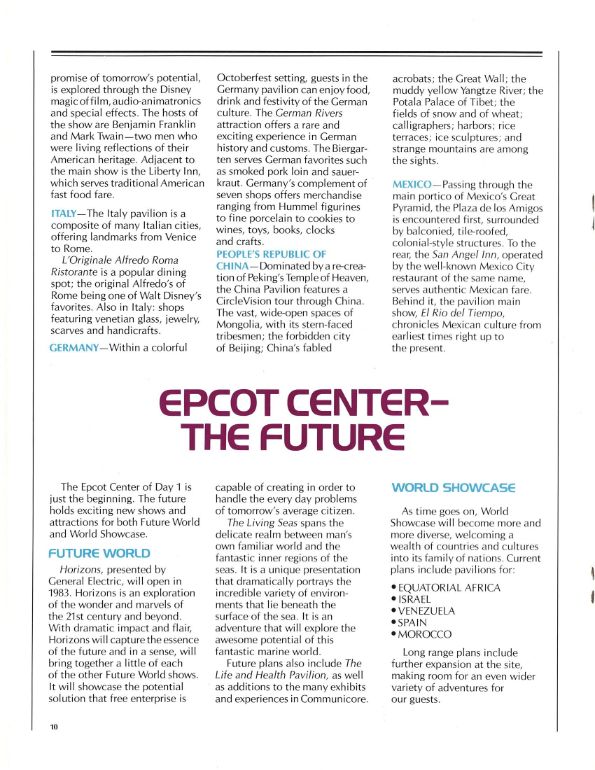 We then move into the making of the park, with a focus on the authenticity to the subjects the pavilions represent. 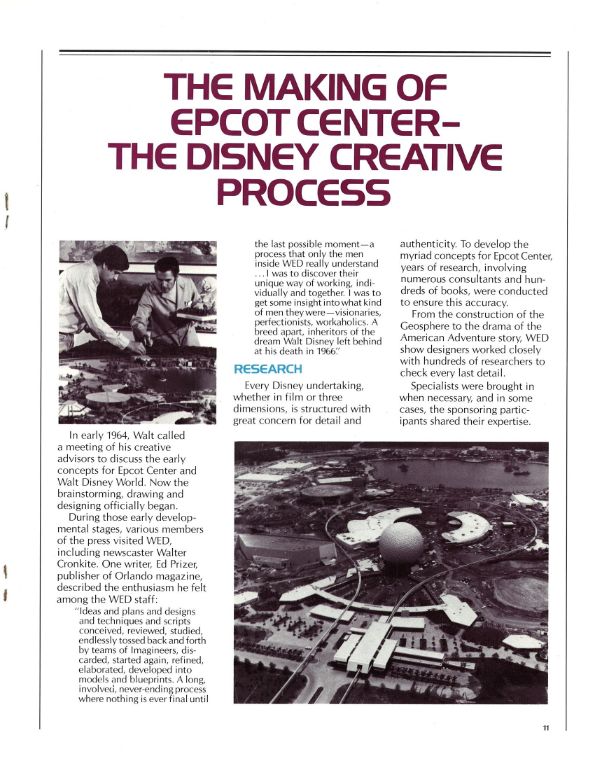 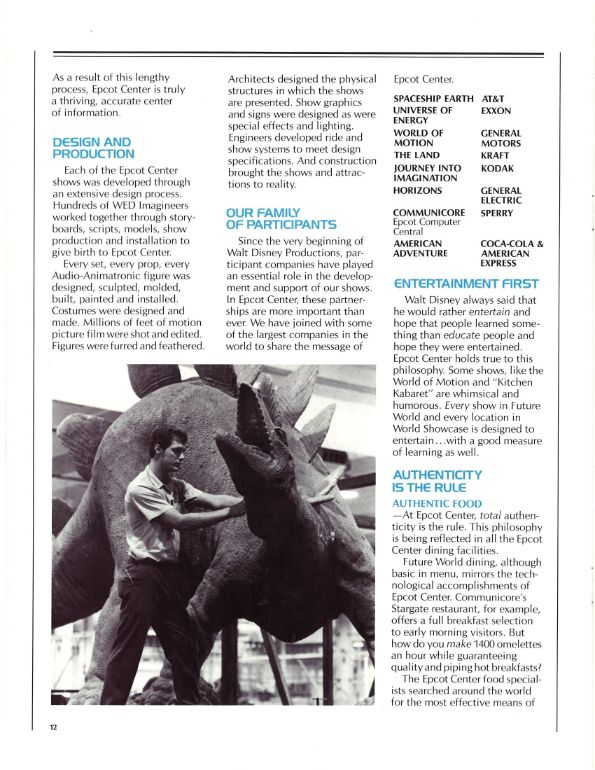 Of course, EPCOT has undergone some serious changes over the years. While this booklet claims “you won’t find pizza in Italy” because it isn’t authentically Italian, in time, a whole restaurant centered around pizza would open at the pavilion. 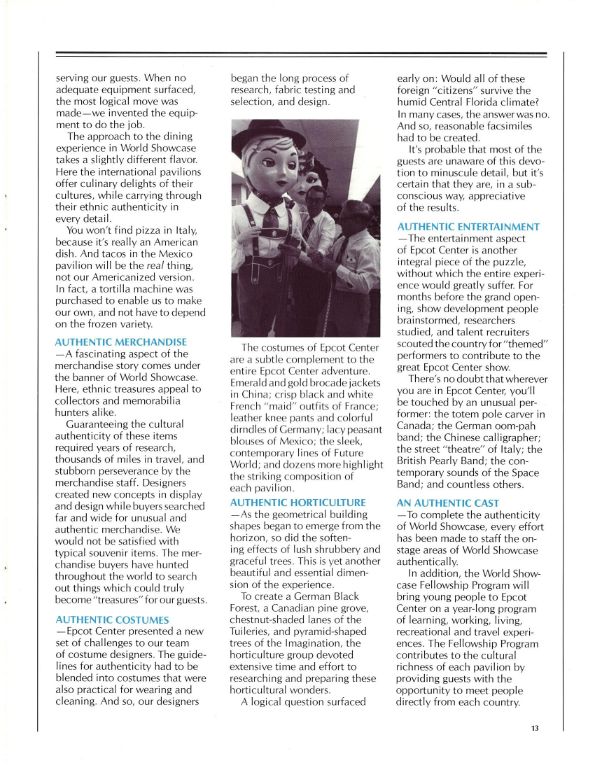 We then move into the role the cast plays in the park. In short: be courteous, knowledgeable, and maintain the “Disney look,” but also be patient and understanding. It’s a new park, after all! 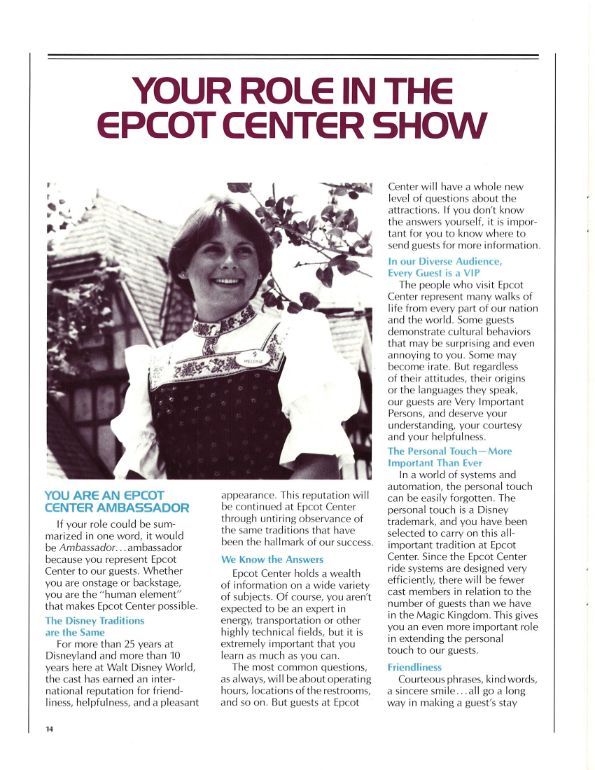 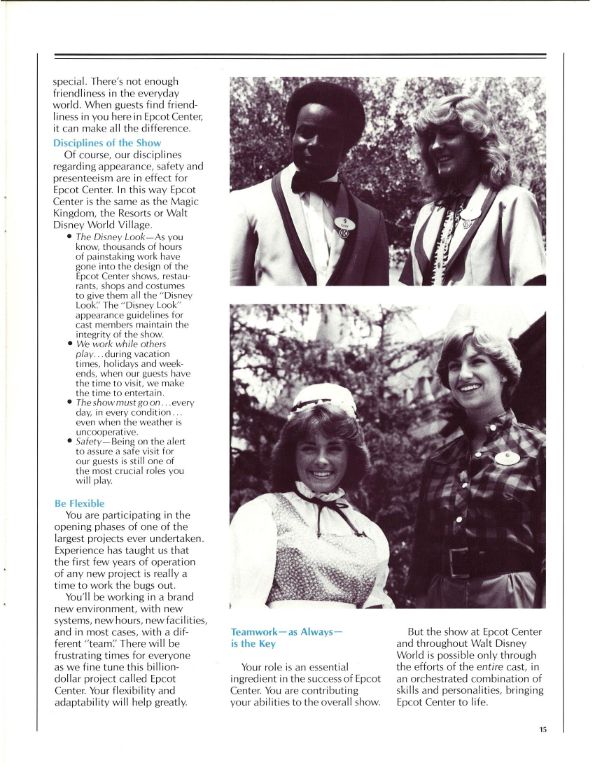 So why all this fuss about a new park? “A Message of Hope” attempts to explain the project’s importance, and just why the world needs EPCOT Center. 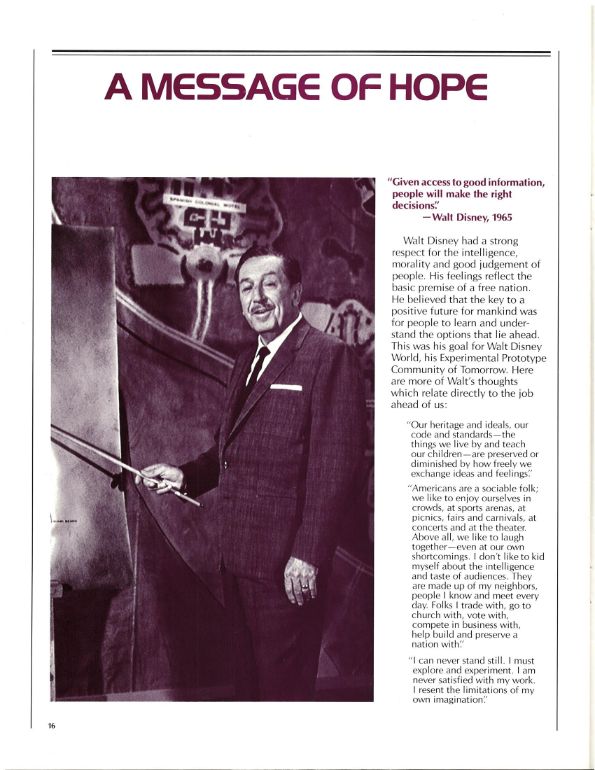 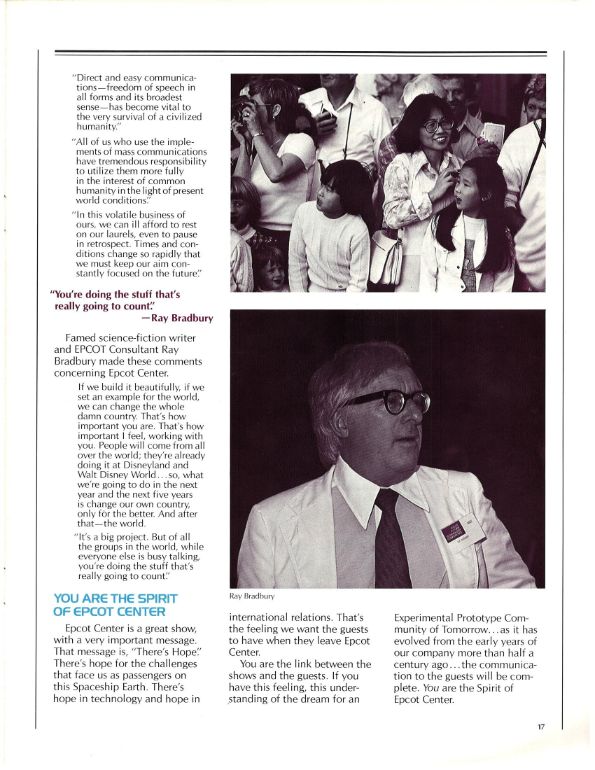 Before it goes into the informational pages, it offers this closing message:

“Epcot Center is a great show, with a very important message. That message is, ‘There’s Hope.’ There’s hope for the challenges that face us as passengers on this Spaceship Earth. There’s hope in technology and hope in international relations. That’s the feeling we want the guests to have when the leave Epcot Center.

You are the link between the shows and the guests. If you have this feeling, this understanding of the dream for an Experimental Prototype Community of Tomorrow… as it evolved from the early years of our company more than half a century ago… the communication to the guests will be complete. You are the spirit of Epcot Center.” 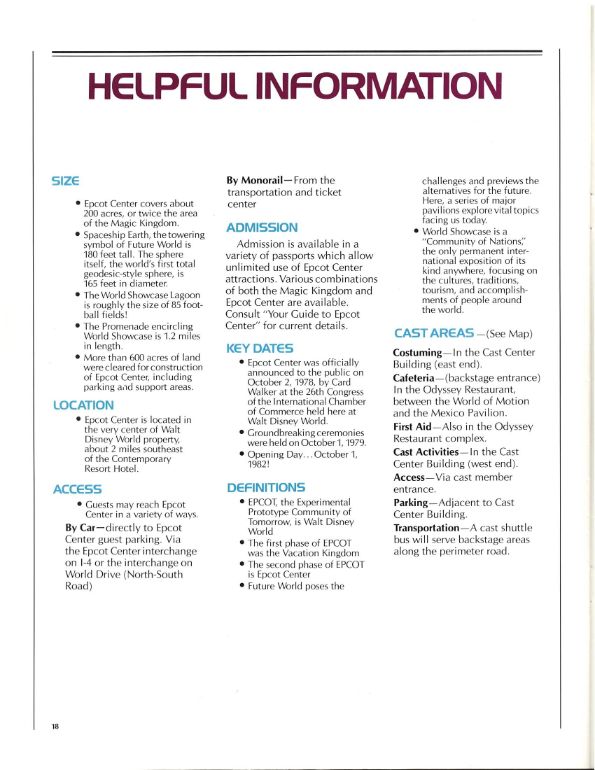 For a cast member, there’s truly “Helpful Information” here, including facts on the size, a timeline on the park, and where all the important cast facilities are. 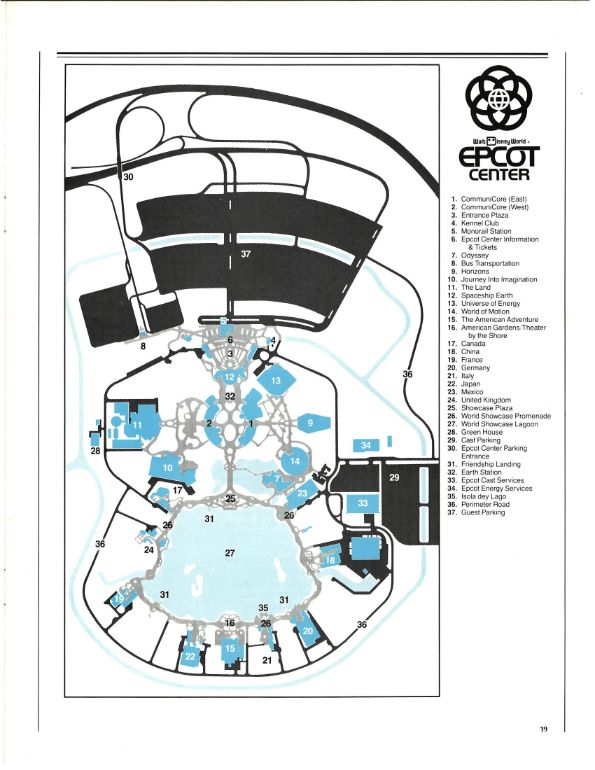 There’s also a map, which includes the future Horizons pavilion. 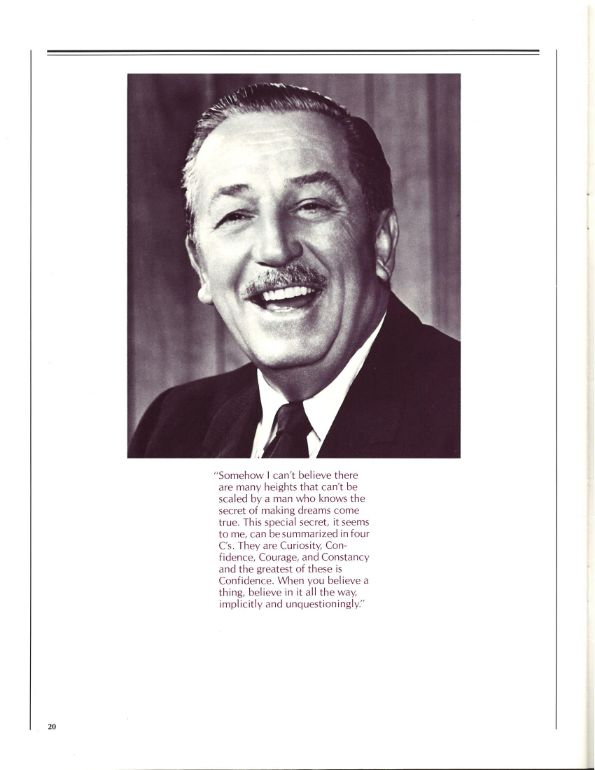 And naturally, it comes to a close with a quote from Walt Disney. 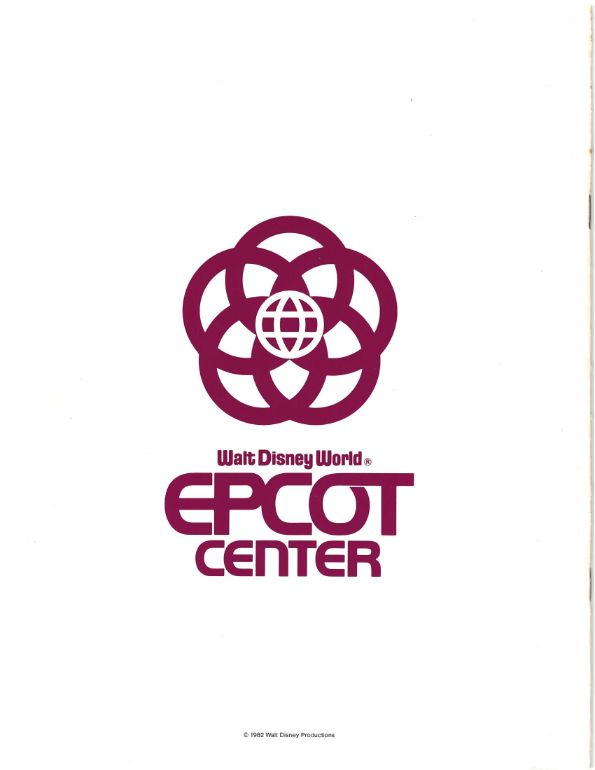 And for bonus coolness, it also includes a cast training checklist, showing how much preparation each cast member underwent to be part of EPCOT Center. 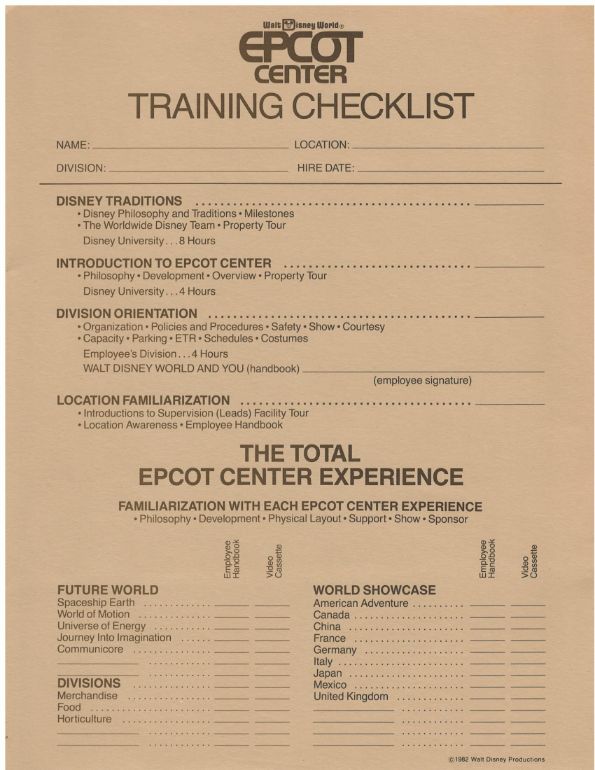 For die-hard EPCOT fans, this is a great document about the meaning behind the park and what it was like to be part of the park in its earliest days.

Next
RECIPE: Make Your Own Mickey-Shaped Beignets at Home With This Classic Disney Parks Recipe