With Disney Parks around the world closed for the foreseeable future, WDWNT is dipping into our archives of vintage parks materials for a look back into parks history! It’s time to remember the magic as we look back nearly a quarter-century at this Walt Disney World 25th Anniversary Guide! 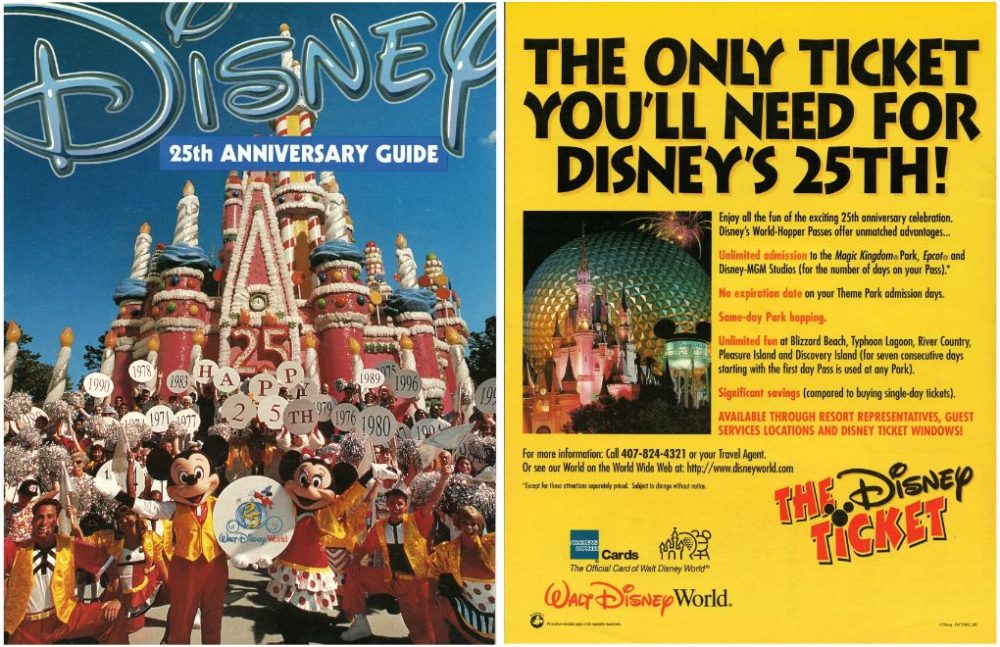 The front cover features the famous (or infamous, depending on who you ask) castle cake that marked the resort’s silver anniversary, while the back advertises “The Disney Ticket,” with no expiration dates and unlimited visits to River Country and Discovery Island! Is there any way I can still get that? And maybe a time machine? 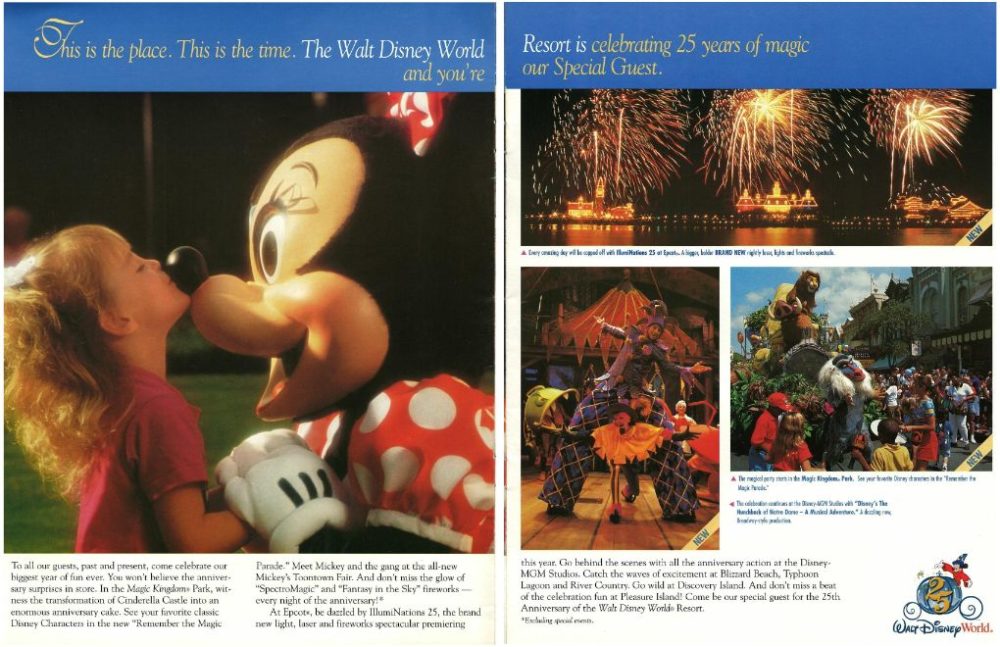 The introduction shows off just a taste of what’s arrived at Walt Disney World recently, and the fun that was to come in 1996:

“To all our guests, past and present, come celebrate our biggest year of fun ever. You won’t believe the anniversary surprises in store. In the Magic Kingdom® Park, witness the the transformation of Cinderella Castle into an enormous anniversary cake. See your favorite classic Disney Characters in the new “Remember the Magic Parade.” Meet Mickey and the gang at the all-new Mickey’s Toontown Fair. And don’t miss the glow of “SpectroMagic” and “Fantasy in the Sky” fireworks – every night of the anniversary! (Excluding special events.)

At Epcot®, be dazzled by IllumiNations 25, the brand new light, laser and fireworks spectacular premiering this year. Go behind the scenes with all the anniversaryaction at the Disney-MGM Studios. Catch the waves of excitement at Blizzard Beach, Typhoon Lagoon and River Country. Go wild at Discovery Island. And don’t miss a beat of the celebration fun at Pleasure Island! Come be our special guest for the 25th Anniversary of the Walt Disney World® Resort.” 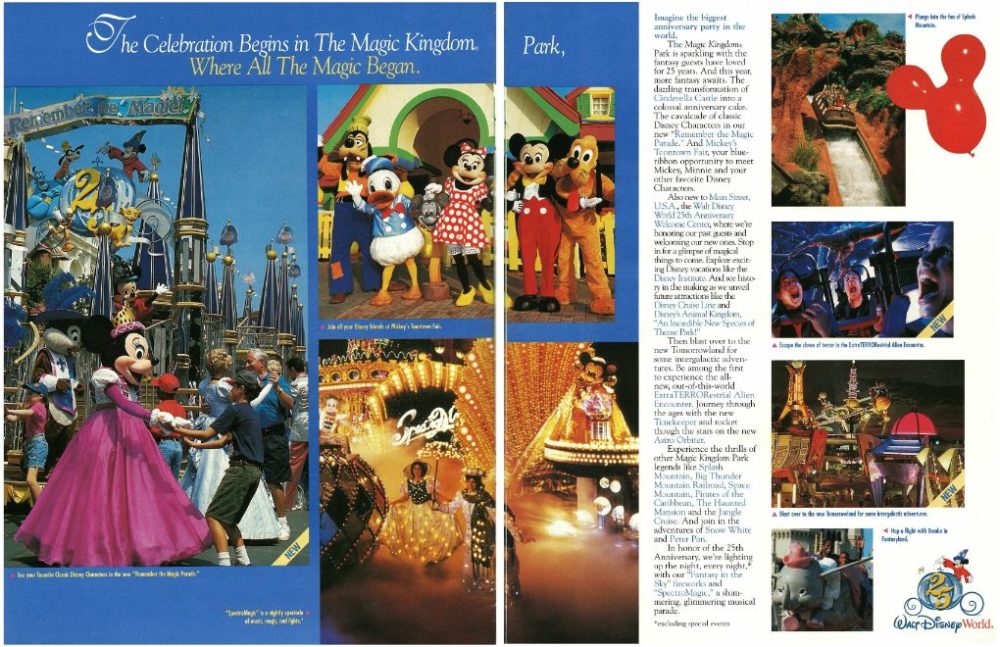 The guide proper begins with the park that started it all, the Magic Kingdom. Do you remember the “Remember the Magic Parade?” Why not take a trip to Mickey’s Toontown Fair? Or see if you’re brave enough for the thrills and chills of Splash Mountain or the ExtraTERRORestrial Alien Encounter. And when the sun goes down, you can dance your way through the night with SpectroMagic.

For a look into the near future, be sure to visit the Walt Disney World 25th Anniversary Welcome Center, with previews of upcoming offerings like the Disney Institute, Disney Cruise Line, and the resort’s fourth theme park, Disney’s Animal Kingdom. 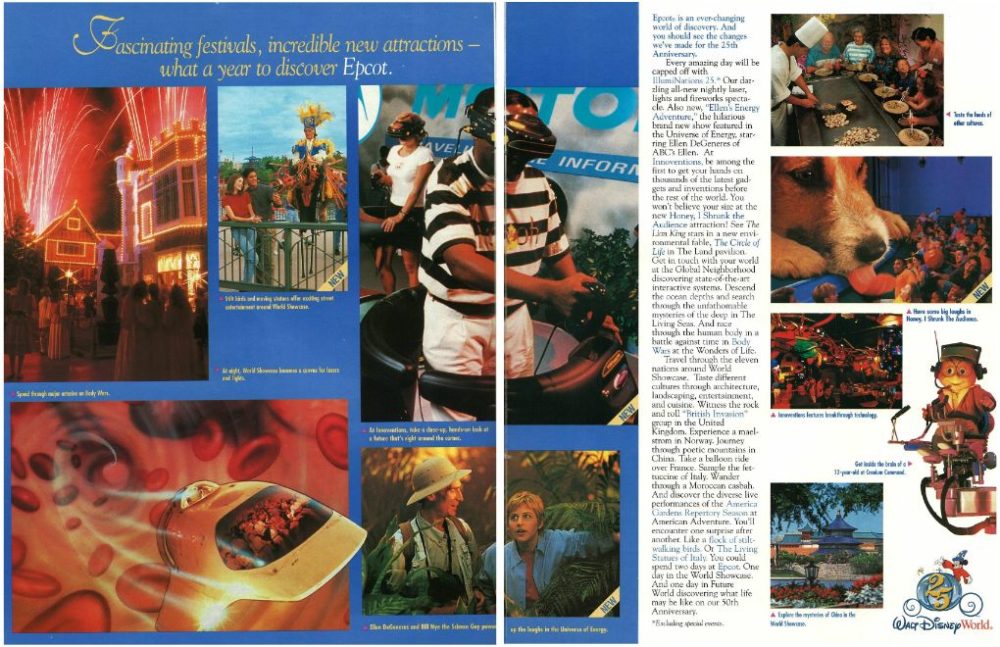 If you can’t get enough of the future, see wonders to come and flights of imagination at Epcot! With the recent debut of Honey, I Shrunk the Audience, Innoventions, Ellen’s Energy Adventure, and IllumiNations 25, there’s plenty to enjoy, as the guide suggests: “You could spend two days at Epcot. One day in the World Showcase. And one day in Future World discovering what life may be like on our 50th Anniversary.” Gee, I sure hope it’s an even bigger celebration! 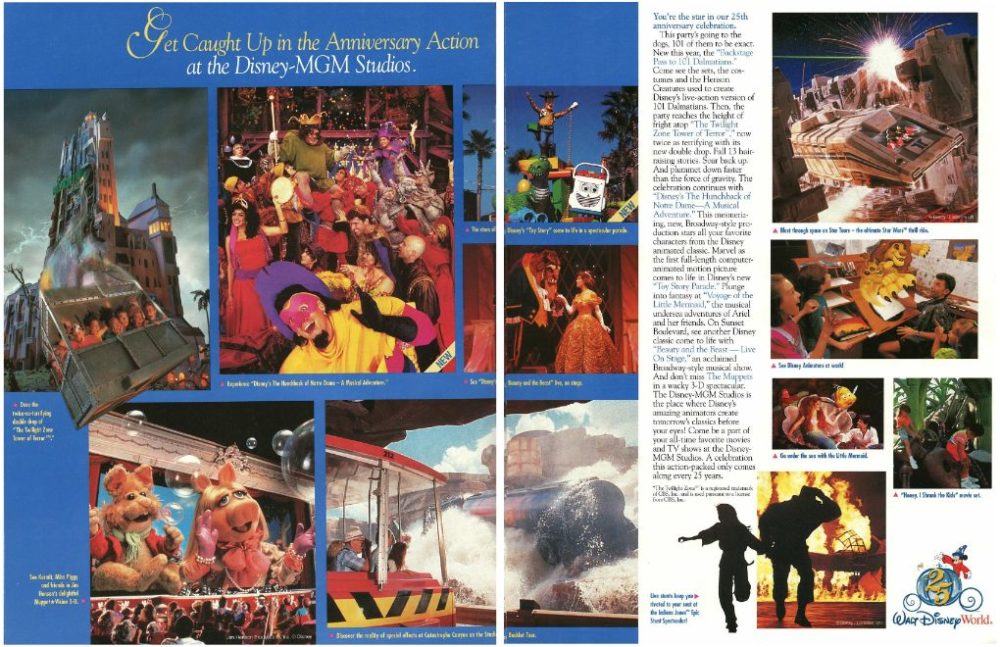 Don’t forget that action, adventure, and great entertainment live at the Disney-MGM Studios! New to the park are Disney’s The Hunchback of Notre Dame – A Musical Adventure, Backstage Pass to 101 Dalmatians, and the Toy Story Parade. Yes, you too can see one of the first uses of Toy Story at the park, before it got a ride… and then a whole land. 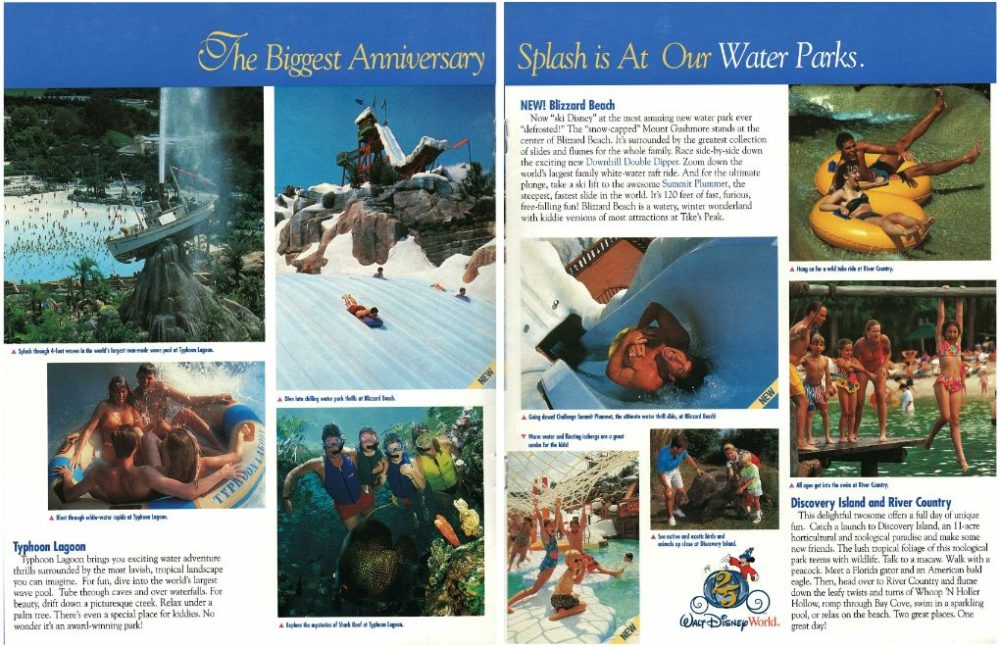 Disney magic meets H2O in three water parks: Typhoon Lagoon, River Country, and the recently-opened Blizzard Beach. Or if you want to get up and close with some wildlife at Discovery Island. 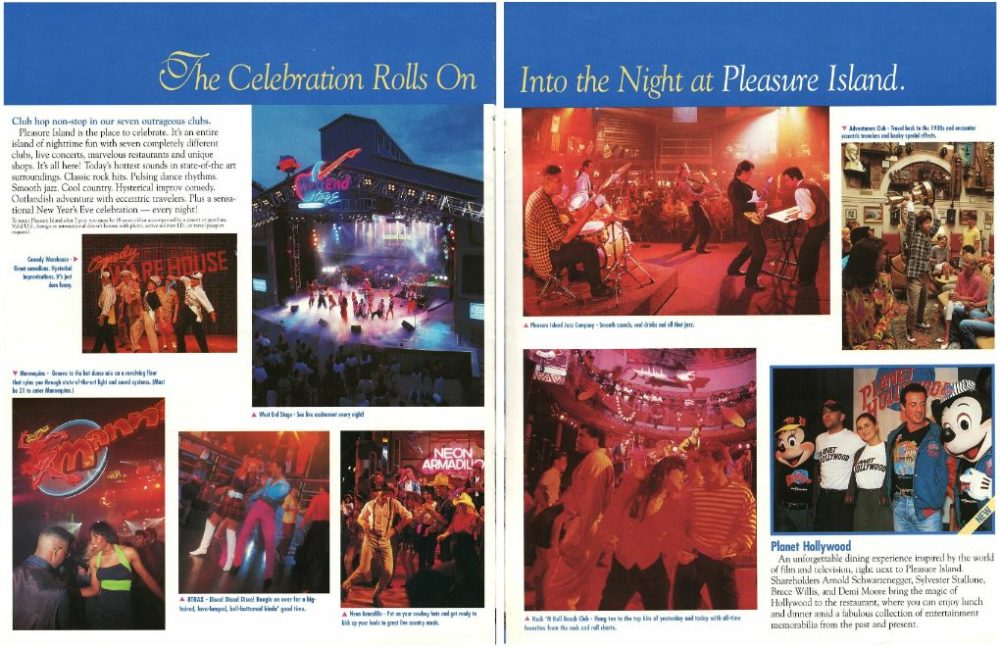 Of course, if you’re thinking of a different kind of “wild life,” be sure to pay a visit to Pleasure Island. With clubs like Comedy Warehouse, Mannequins, Neon Armadillo, Pleasure Island Jazz Company, Rock ‘N Roll Beach Club, and the Adventurers Club, there’s many ways you can spend your night. But if you really want to celebrate the resort’s 25th, you can step back in time and groove to the music of the 70’s at 8TRAX. And if you’re hungry for something more than adventure, check out Pleasure Island’s newest restaurant, Planet Hollywood. (If you realized taht the restaurant’s the only thing in this paragraph that’s still standing, you can cry now.) 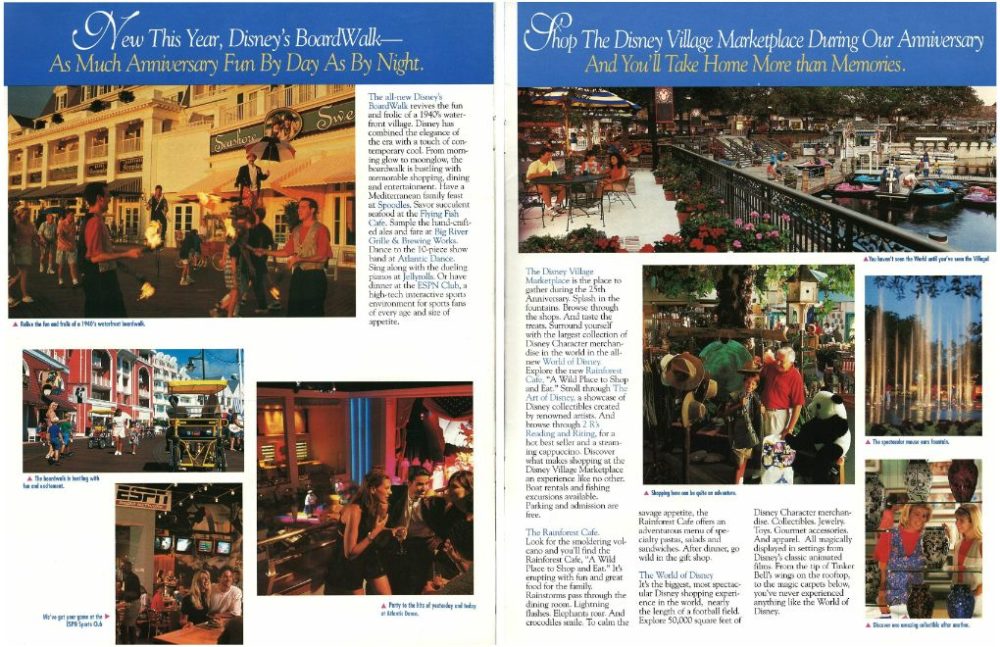 Also new for the big anniversary? Just a little locale called Disney’s BoardWalk. In a reverse of Pleasure Island, many of the BoardWalk’s offerings are still in operation, including Flying Fish, Big River Grille & Brewing Works, ESPN Club, and Jellyrolls! It really is a neat place to visit.

This fold also features The Disney Village Marketplace, one year before it would change its name to Downtown Disney. New to the Village are Rainforest Cafe and World of Disney. (They’ll never last, wink wink.) 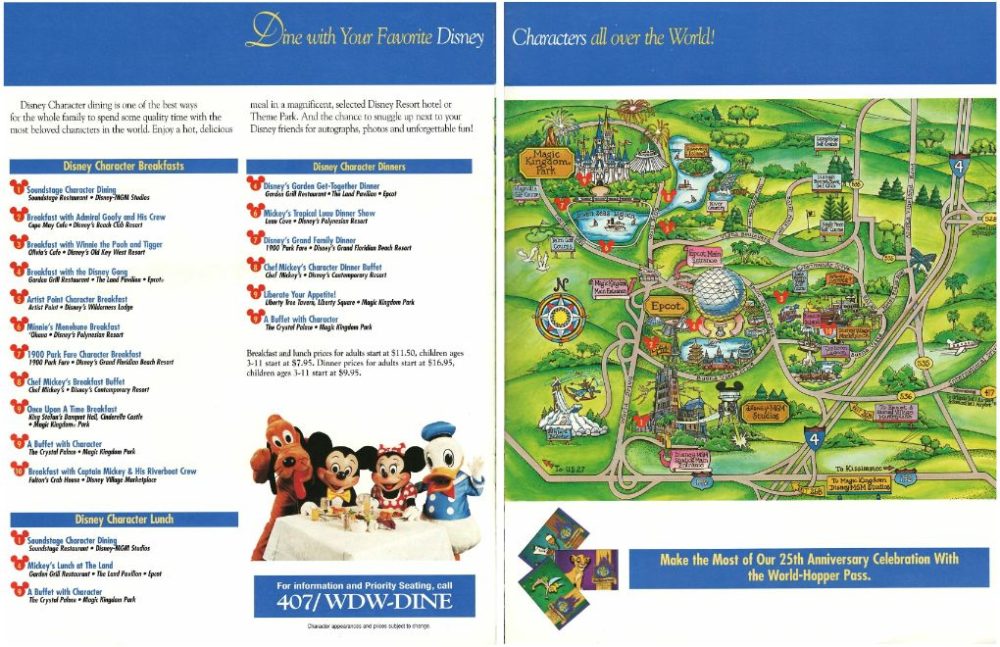 Character dining is the focus of the next section, with a cute stylized map of the resort (minus resort hotels). 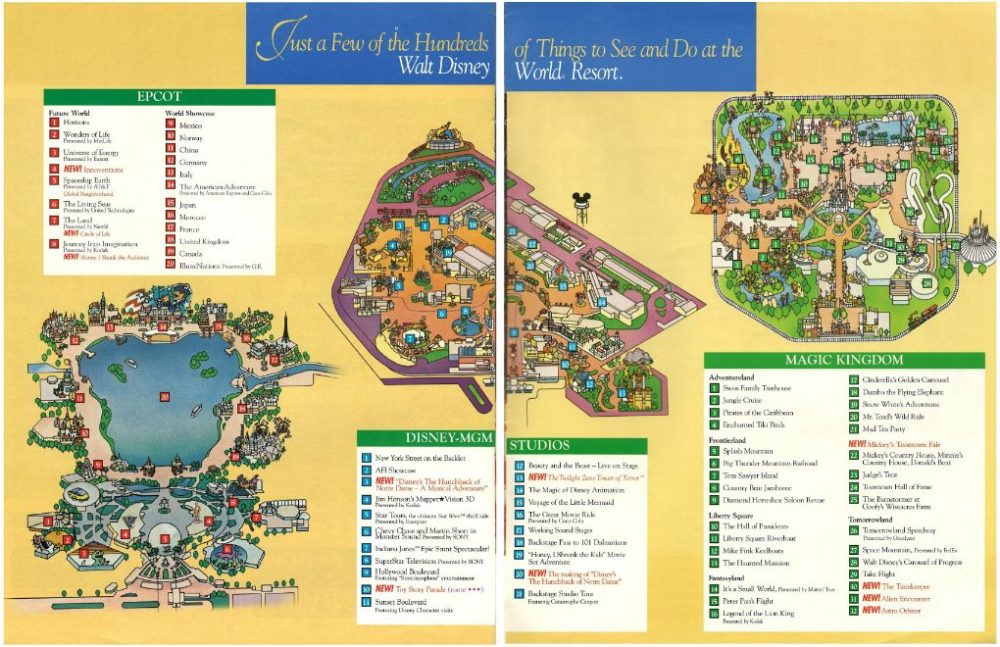 And in a cool tribute to 25 years, the final section consists of maps of the resort’s three theme parks, all drawn in that early 1970’s style.

Whether it’s theme parks, water parks, dining, dancing, or shopping, there’s so much to njoy at Walt Disney World for its 25th anniversary! One can only wonder what next year will bring….