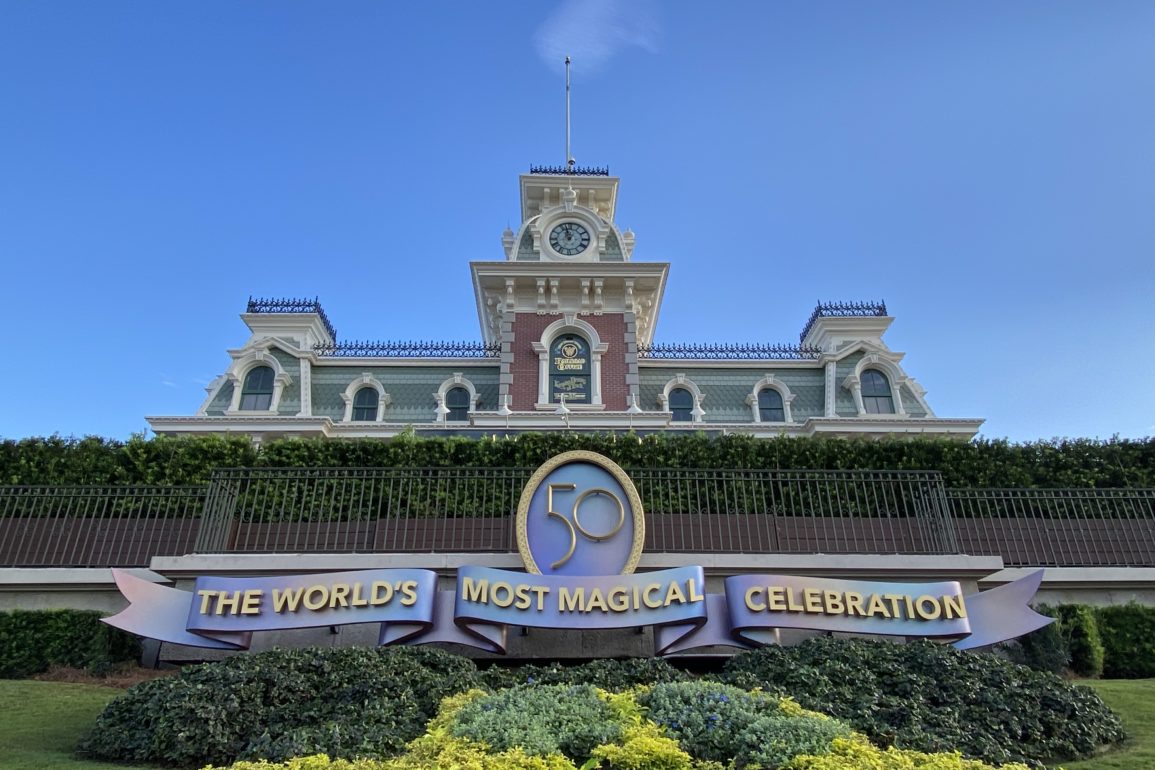 A brand new 50th medallion and banner awaited us as soon as we got into the park’s gates!

Just inside, the clock on Main Street also received an EARidescent makeover to match the castle.

Tony’s Town Square Restaurant has had its sign replaced after a long hiatus.

The stage that was surrounding ‘The Partners’ statue in the center of Magic Kingdom’s hub has been removed now that filming is complete.

Br’er Rabbit’s bronze statue has been removed from the hub.

The Liberty Belle returned from refurbishment and is operating once again.

Princess Fairytale Hall did not receive new Lightning Lane signage, but did have its FastPass+ signs covered.

Space Mountain’s FastPass+ sign on the right now sports a navy blue stripe instead of its previous solid blue.

New banners featuring the Great Goofini have been installed at The Barnstormer in Storybook Circus.

Rock benches in Adventureland continue to receive a fresh coat of paint.

Pick your own gems has returned to Plaza Del Sol Caribe at the exit to Pirates of the Caribbean for $6.99.

The exterior of the Frontierland Railroad Station has been stained.

Newly panted boxes, barrels and other props have been placed at one of the loading docks for Tom Sawyer Island.

Boardwalk construction continues in Frontierland at Country Bear Jamboree where new boards now sit in front of the entrance to the attraction.

A newly poured pebbled trail extends from the restrooms in Frontierland near Diamond Horseshoe. Newly scored pavement next to the Frontierland Shootin’ Arcade is ready for replacement.

More fresh paint adorns “it’s a small world” as blues and reds made their way onto the loading zone.

Painting on the last of the three tents in Storybook Circus continues as yellow and orange is added to the lower hanging section of roof.

Green paint has been added to multiple areas in the hub and Main Street, U.S.A. including the Main Street Train Station balcony railings and stairways, Nikon picture spot and Happily Ever After signs, and lampposts.

A solitary lamppost in front of the Plaza Ice Cream Parlor received what we can only guess is a 50th anniversary makeover as sections receive sparkling gold paint.

The Emporium has a newly renovated sign while its counterpart on the opposite side of the building is removed for refurbishment.

Making our way over to EPCOT, Living with the Land sees its 13th consecutive day of closure.

Although it is closed, it did receive Lightning Lane signage along with Soarin’ and Pixar Short Film Fest.

The transfer test car is back out front at Test Track. It allows guests to practice entering and exiting the vehicle before getting on the attraction.

Trekking over to the wilds of far away jungles, Disney’s Animal Kingdom finally received its 50th anniversary park banners.

A new pin trading cart is now across from Anandapur Ice Cream Truck.

The KiteTails dock received a few upgrades in preparation for the new show debuting October 1st.

While currently none of the attractions in the park received Lightning Lane signage, UP! A Great Bird Adventure is missing its FastPass+ sign.

Posters and fliers pasted up around Africa are slowly being removed and new ones are taking their place. The signage is designed to naturally wear with its environment over time and are being replace with ‘new’ weathered art.

The transfer car for Flight of Passage is also back out in front of its attraction.