All of the New “Cinderella” 70th Anniversary Treats (with Reviews!) at Walt Disney World 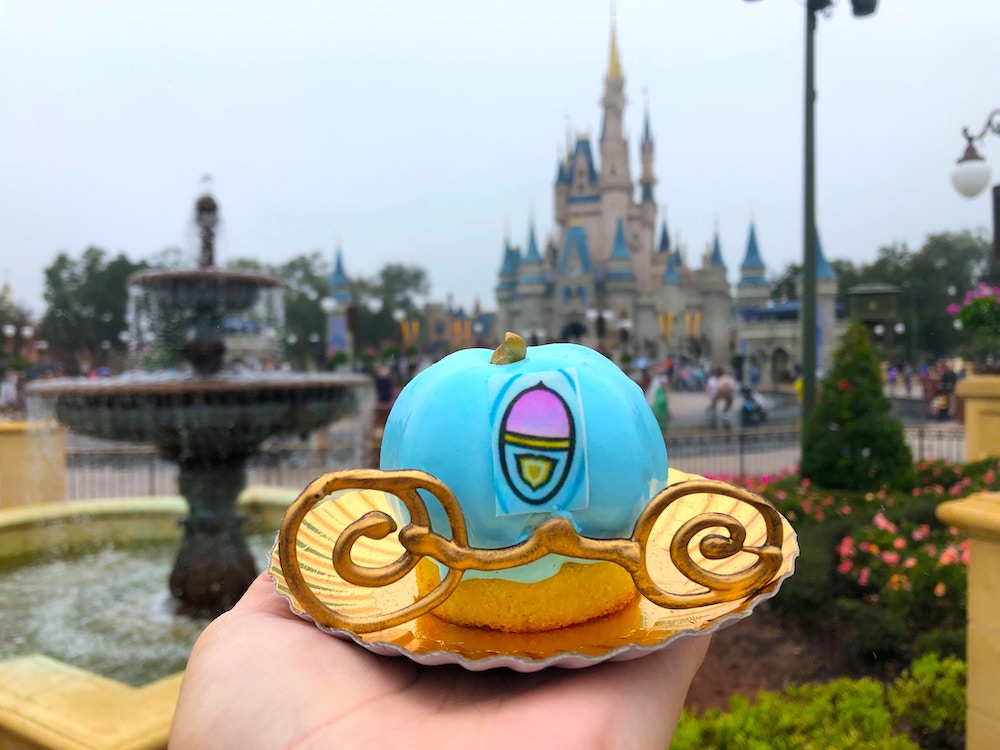 The Bibbidi Bobbidi Boo Cake is here! The carriage that escorts Cinderella to true love is now in cake form in time for the movie’s 70th anniversary and February’s day of love.

The cake is lemon-scented Bavarian mousse filled with blueberry compote on top of citrus almond cake. It resembles the pumpkin coach that the Fairy Godmother creates to take Cinderella to the ball. The cake can be found at the Main Street Bakery as well as in the Starbucks in the Magic Kingdom. You can read our review on it here. 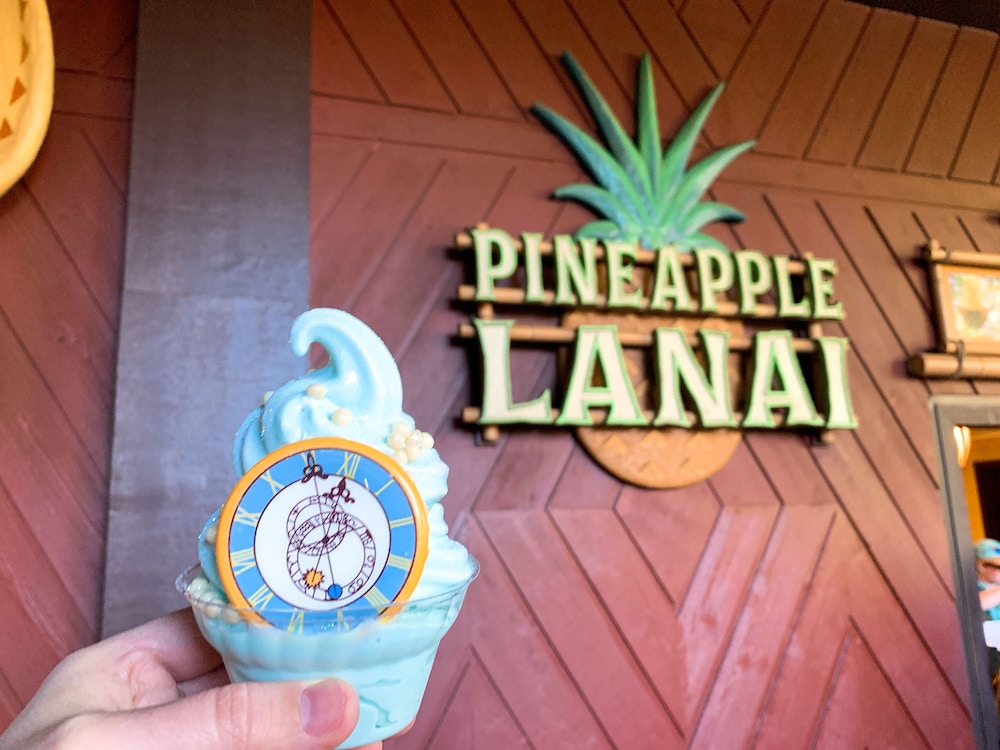 This tasty treat can be found over at Pineapple Lanai at the Polynesian Resort, and costs $5.99. Get yours soon, before it turns into a pumpkin! You can read our review on it here. 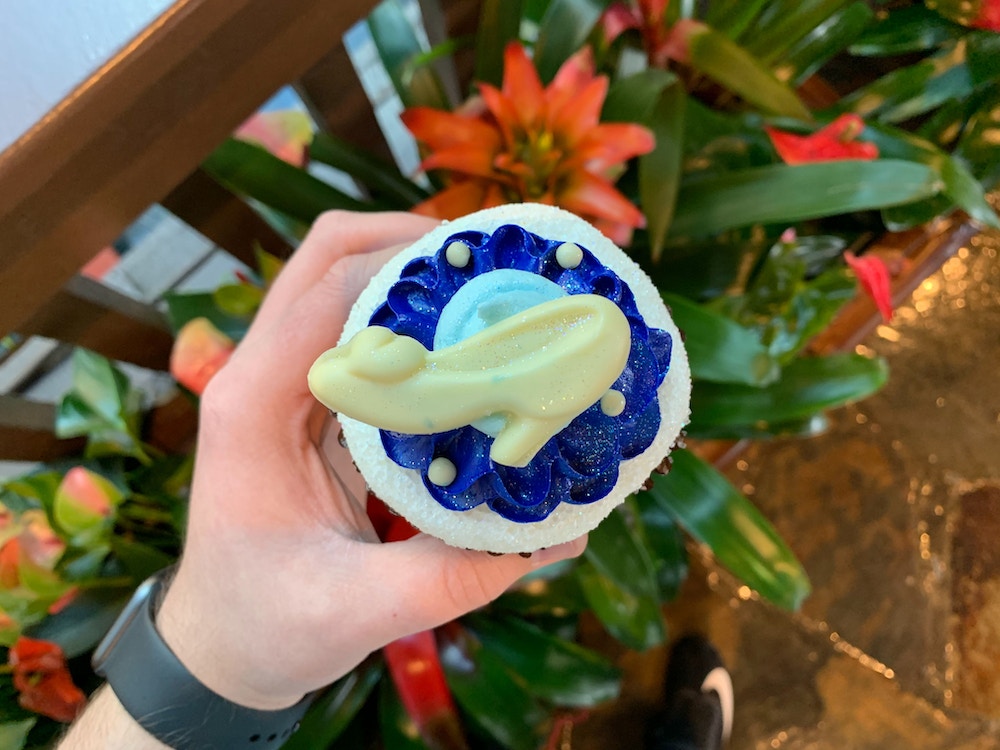 The Polynesian Resort also has another Cinderella treat if you’re not craving ice cream. You can try out this cupcake instead! The top is coated with thick sugar crystals, which adds a nice crunch — but also an intense sweetness. We love the edible glitter on the blue frosting and white chocolate slipper. Inside, the filling include whole blueberries!

This Cinderella cupcake is $5.99 and can be found at Kona Island inside Disney’s Polynesian Resort. You can read our review on it here. 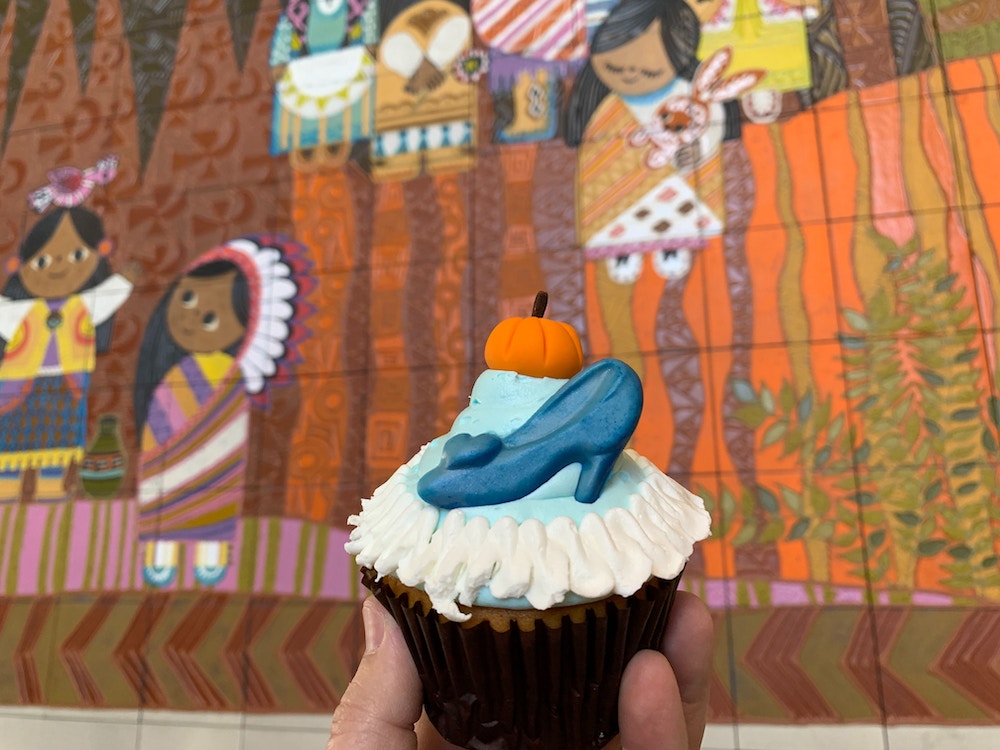 The Contemporary Resort has chosen to theme their Cinderella cupcake after her famous glass slipper and pumpkin.

This cupcake features yellow cake filled with pumpkin cream custard topped with blue buttercream, a fondant pumpkin and a chocolate slipper. You can check out our review here. 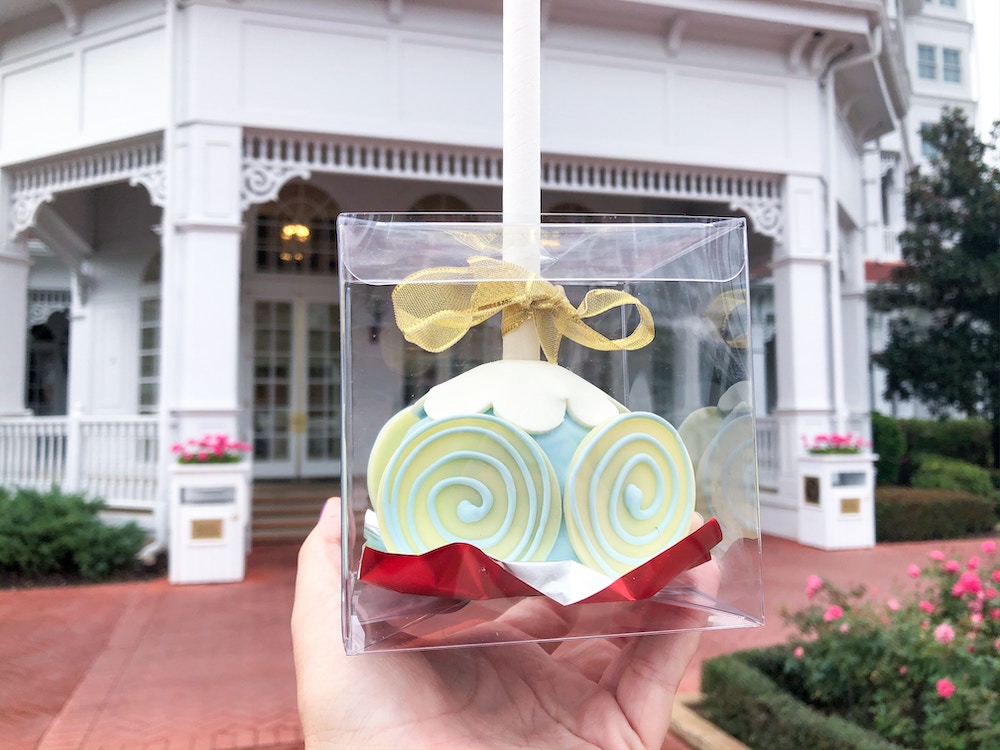 Cinderella’s 70th Anniversary Carriage Cake Pop can be spotted at Gasparilla Island Grill at the Grand Floridian Resort and Spa and is served in this plastic box with a liner, which keeps the cake pop safe if you’re taking it to-go.

This cake pop is triple chocolate, fresh and massive. It’s an overwhelmingly chocolatey cake pop — much richer than those in the parks. You can find our review on it here. 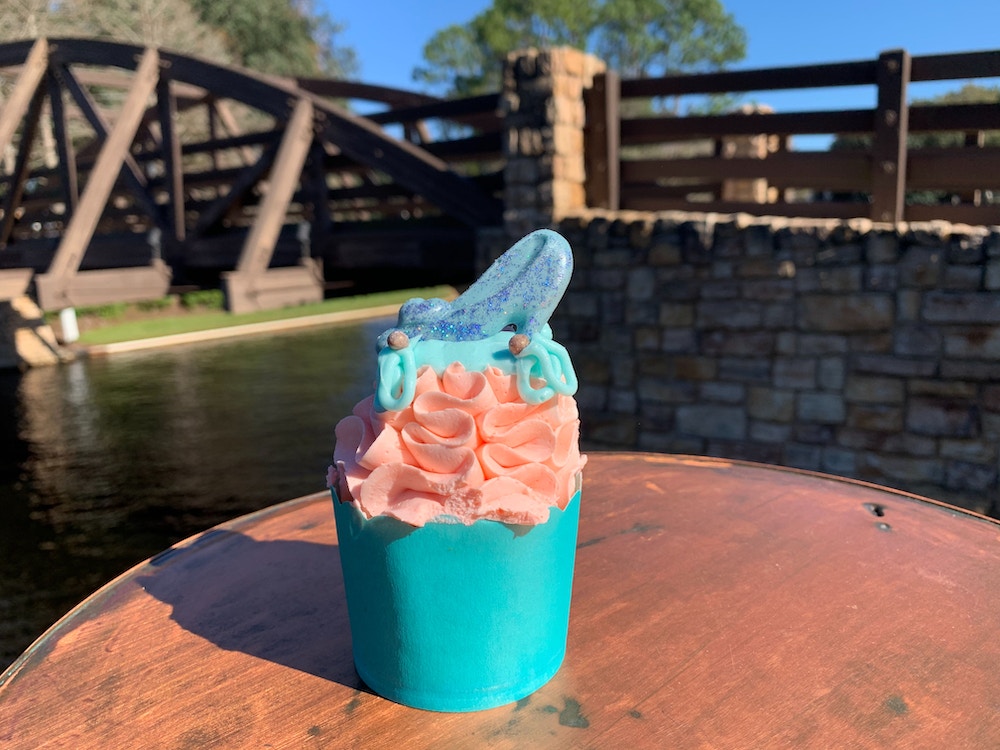 Disney’s Port Orleans Resort has taken their own twist on the Slipper Cupcake with their own, found at the Riverside Mill and Sassagoula Floatworks & Food Factory.

This cupcake has pink buttercream icing, a white chocolate slipper on top of a blue icing pillow, and crunchy pearls on top. It’s filled with strawberry. To find out what we thought about it, you can find our review here.

Off to the Ball Dessert

The Off to the Ball Dessert can be found at Centertown Market at Disney’s Caribbean Beach Resort.

This cheesecake carriage has a chocolate-hazelnut ganache center and it topped off with white chocolate decorations. 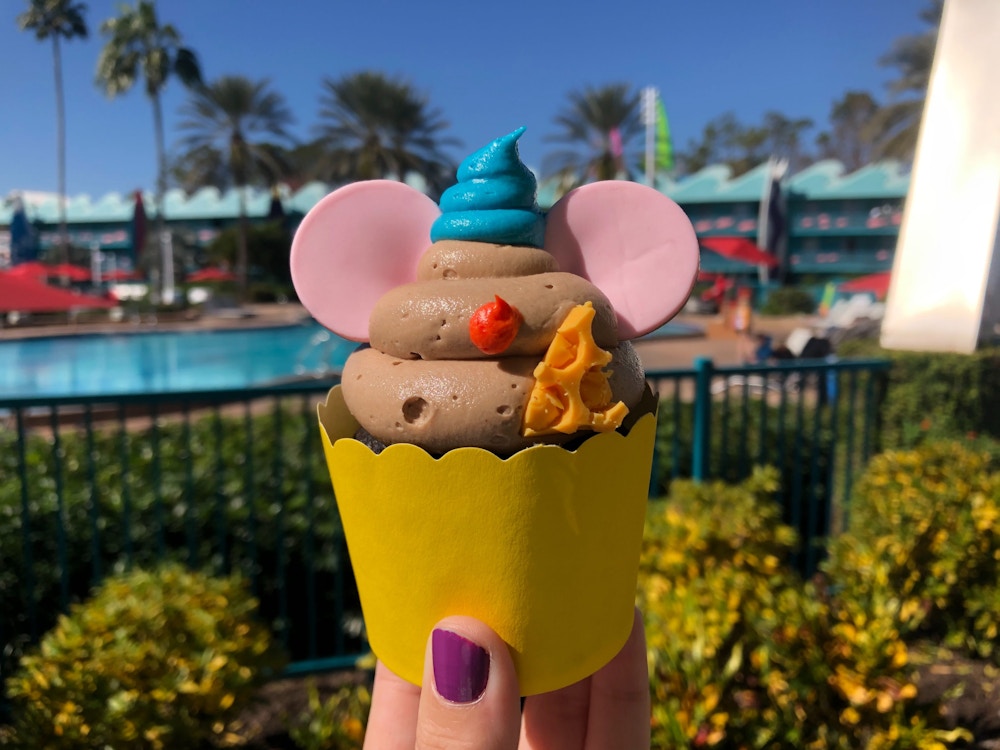 Look at all the Gus Gus details! The blue hat, the yellow packaging, the pink ears, the red nose, the cheese… We love how much detail they put into it, from the yellow liner to the hat.

This chocolate cupcake with peanut butter fluff filling can be found at the Food Courts of Disney’s All-Star Resorts, and you can find our review here.

Another take on Cinderella’s famous glass slipper will be immortalized in cupcake form starting from Feb. 9-Mar. 7 at Everything POP Shopping & Dining at Disney’s Pop Century Resort and Landscape of Flavors at Disney’s Art of Animation Resort.

This yellow cupcake with lemon filling, tea-infused buttercream, sugar crystals, and a white chocolate slipper makes this cupcake have it’s own twist from the other glass slipper cupcakes across property.

Cinderella’s Coach Chocolate Box is available Year-Round at The Ganachery at Disney Springs, so you don’t have to worry about it turning into a pumpkin on you any time soon. The Cinderella’s Coach box is filled with two ganache squares of your choice. 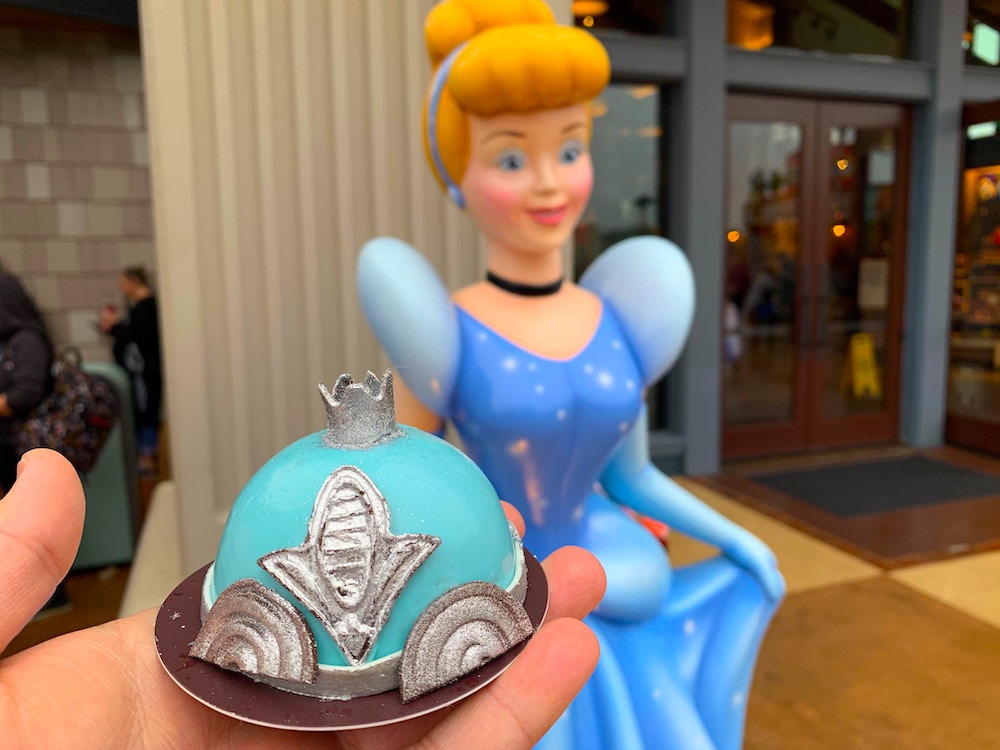 This Cinderella’s Carriage Cake is a beautiful blue globe, accented with silver medallions and a crown dusted with silver sparkles. The strawberry mousse coating hides the strawberry champagne center and vanilla chiffon cake. You can find this treat at the Amorette’s Patisserie in Disney Springs and can read our review on it here.

So This Is Love: A Cinderella Anniversary Tea Party

Don’t worry Disneyland, you can celebrate Cinderella’s 70th anniversary as well with a tea party at Steakhouse 55 at the Disneyland Hotel.

For a limited time beginning February 7, a very special tea party is sure to enchant taste buds of all ages! The menu features a delectable selection of salads, scones, tea sandwiches, desserts, and a dash of Disney magic—plus an assortment of loose-leaf teas and herbal infusions. Aperitifs, wines by the glass, ports, and cordials are also available for an additional charge.

What do you think of all of these specialty treats? Will you be rushing out to get yours before the clock strikes twelve? Let us know what your favorite dish is as well!