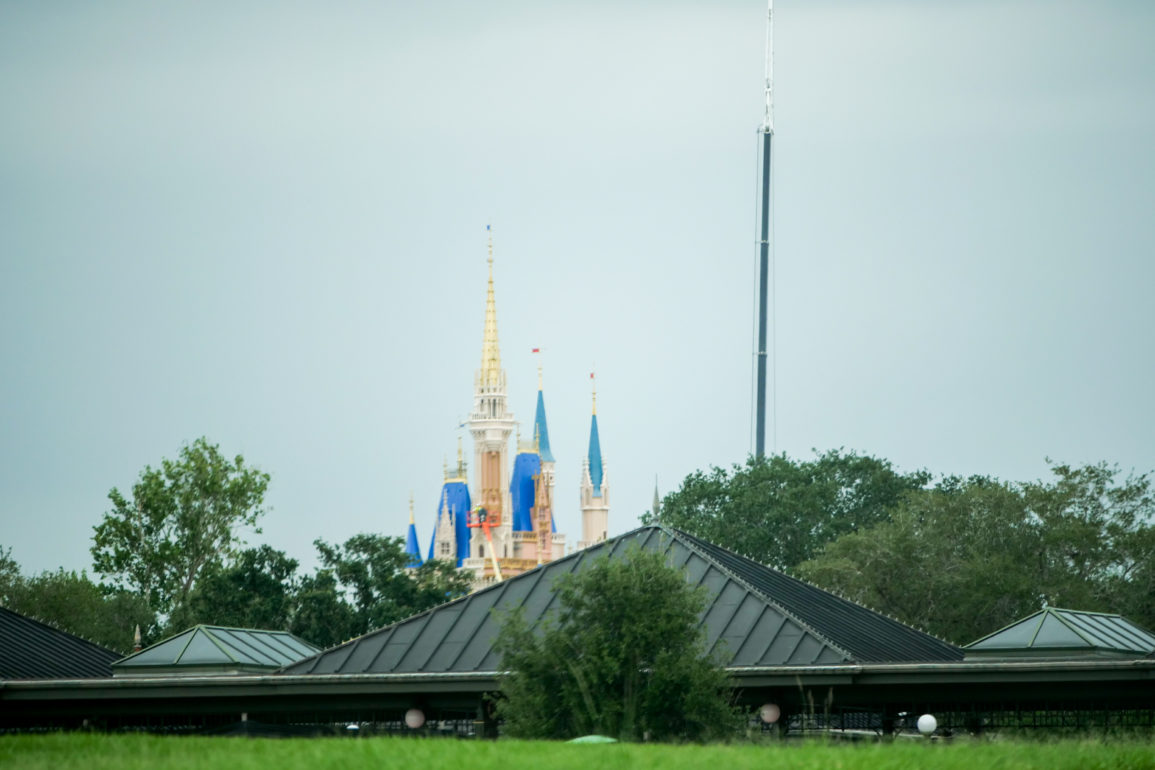 While March 16th, 2020 was certainly one of the most notable dates in Walt Disney World history – the day it closed due to COVID-19 conerns – the following day was also one of significance. That was the day that it was reported that most or all construction projects at Walt Disney World would be halted in short order. Since then, we’ve had little indication if, or when, some of these projects would be restarted.

However, as we just recently reported, work has begun again within the Magic Kingdom. That news came to us by way of a gigantic crane looming over Cinderella Castle. With that clear sign of work being resumed, we’re taking a look at both the Cinderella Castle Makeover project, as well as progress on TRON Lightcycle Run.

From the north side of Walt Disney World property, or what most would consider the “back” of the Magic Kingdom, we can see that the gargantuan crane that we spotted yesterday is still being put to use.

From the front side of the castle, we start to get a better look. We can still clearly see the crane alongside the castle, but can also start to see the contrast between the previous colors of Cinderella Castle and the new hues being applied.

The second and third tallest turrets still retain their older blue shade, while all of the others have the royal blue that has been applied as part of the new look. The makeover was announced on February 17th, and includes the bold blue on the turrets, but also “rose pink” surfaces and gold accents.

In this final photo of the castle, we can see a worker on a lift actively applying that rose pink color to the tallest spire of the iconic castle, bringing the structure closer to its finished form.

Since our last post on the progress of TRON Lightcycle Run’s construction, a lot has changed with regard to Walt Disney World. We’ve also had precious few opportunities to see the status of the new Tomorrowland attraction. However, less than two weeks ago, we reported that construction had resumed on the mostly-enclosed roller coaster.

Today, we were able to assess the state of the ride which was announced way back in 2017 at the D23 Expo. As these first two pictures illustrated, much of the main show building is still open and exposed to the elements. Despite a fair amount of weathering on some of the structure, the track itself appears pristine.

Scaffolding can be seen both on the south side of the building as pictured above, as well as on the east side which faces World Drive.

Looking towards the heart of Tomorrowland and the Tomorrowland Speedway, we can see the outdoor portion of the track now has additional support structures surrounding it. These structures will eventually be part of the illuminated canopy which will provide the track, and riders, with some cover.

Finally, the north side of the building still has the same opening in place as it did back in March when work was ceased. We can also see a portion of the giant construction crane in the background which does most of the heavy lifting on the work site.

Are you excited to see that work is being resumed on these projects? Does progress being made in the Magic Kingdom bring back a sense of normalcy for Walt Disney World? Let us know your thoughts in the comments!