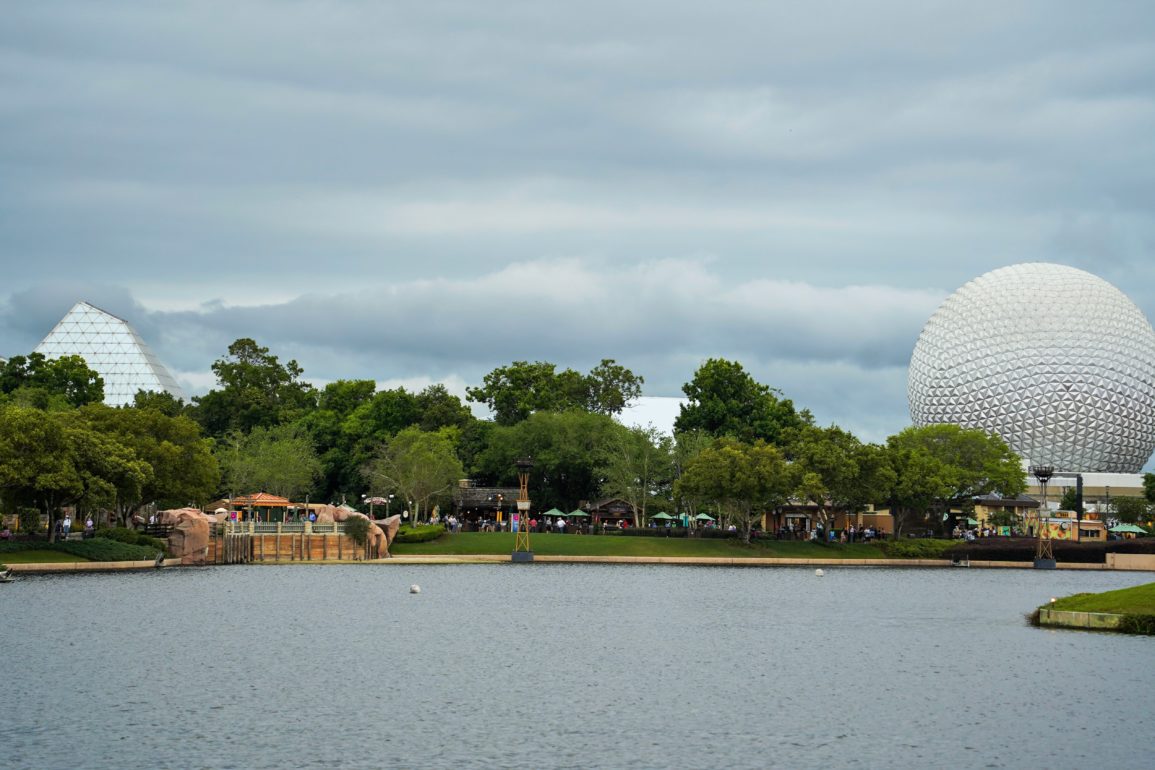 Welcome to EPCOT! We have, unfortunately, a fairly nasty day in store as we come up against severe thunderstorm warnings as part of a weather system which produced dangerous lightning and hail around the Central Florida area. Despite this, we’ve managed about an hour of ‘dry time’ in the morning to take inventory of the various construction projects around the park.

Starting with Guardians of the Galaxy: Cosmic Rewind, things are, well, disappointing. Looking back to our update from weeks ago, the exterior situation looks basically identical.

Where Disney is focusing its attention, however, is on the new retail store which we now know will, sadly, be named “Creations Shop”. So, instead of having an original attraction opened for Walt Disney World’s 50th anniversary, we’ll have a nonsencically-named store.

When we say Disney is focusing attention on this store, we mean it. Crews of workers were active on the site this morning until the weather cleared them out. Nearly every project on Walt Disney World property goes dormant for the weekends — Creations Shop is one of the only with activity on Sundays, let alone weekends at all.

Thankfully, not all is lost when it comes to shops and names of the past, as Club Cool will be returning — adjacent to the new shop. While that section of the old Innoventions East building was a bit quieter today, it’s seen its fair share of work lately.

Outside of Creations Shop, the new World Celebration popcorn stand continues to be slowly built, with foundational elements coming together.

Similarly, at the former Innoventions West site, plenty of cement has been poured over what was a basement for the old structure. This area will eventually house “Journey of Water” inspired by Moana, a walk-through attraction with ties to the movie.

Out in World Showcase, our feathered friends at Gran Fiesta Tour continue to lack dimension.

On the lagoon, things were starting to darken as the storms moved in.

Looking back to Future World, the clouds were ominous.

We still had a few minutes left to check on La Gelateria, the iced treat shop which will open in the Italy Pavilion in the near future.

As part of the France Pavilion, the expansion which holds Remy’s Ratatouille Adventure sits dormant, needlessly being left idle for nearly six more months until its grand opening.

We had just enough time to make it to the Imagination Pavilion as the skies began to open up. Photos certainly don’t do the situation justice as lightning, high wind gusts, and heavy rains all overtook the park.

Once we were able to safely make our way out of Imagination, we headed to The Land, which was an idea many other guests had.

So many guests had this idea, in fact, that the queue for getting downstairs at The Land to Soarin’ or Living with the Land was diverted through the staging area for Awesome Planet. The attraction was suspended as crowds were routed through its pre-show area.

Frozen Ever After experienced a power surge which took the attraction out of commission for a short time. Naturally, any time power is interrupted to a computer-powered attraction (which is all of them), there is a delay in being able to cycle and return to service.

However, attractions aren’t the only parts of the park to be affected by the weather, and numerous — but not all — festival kitchens would be temporarily shuttered during and after the poor weather.

While the worst of the storms would move on, the rain would be a staple for most of the day, as seen here in World Showcase Lagoon.

Spaceship Earth, the entrance fountain, and new entrance flags all looked dreary in the dark and wet weather.

We hope you enjoyed our trip around EPCOT today, despite the nasty weather. Be sure to check in with WDWNT.com regularly for the latest update from Walt Disney World and Disney parks around the world!