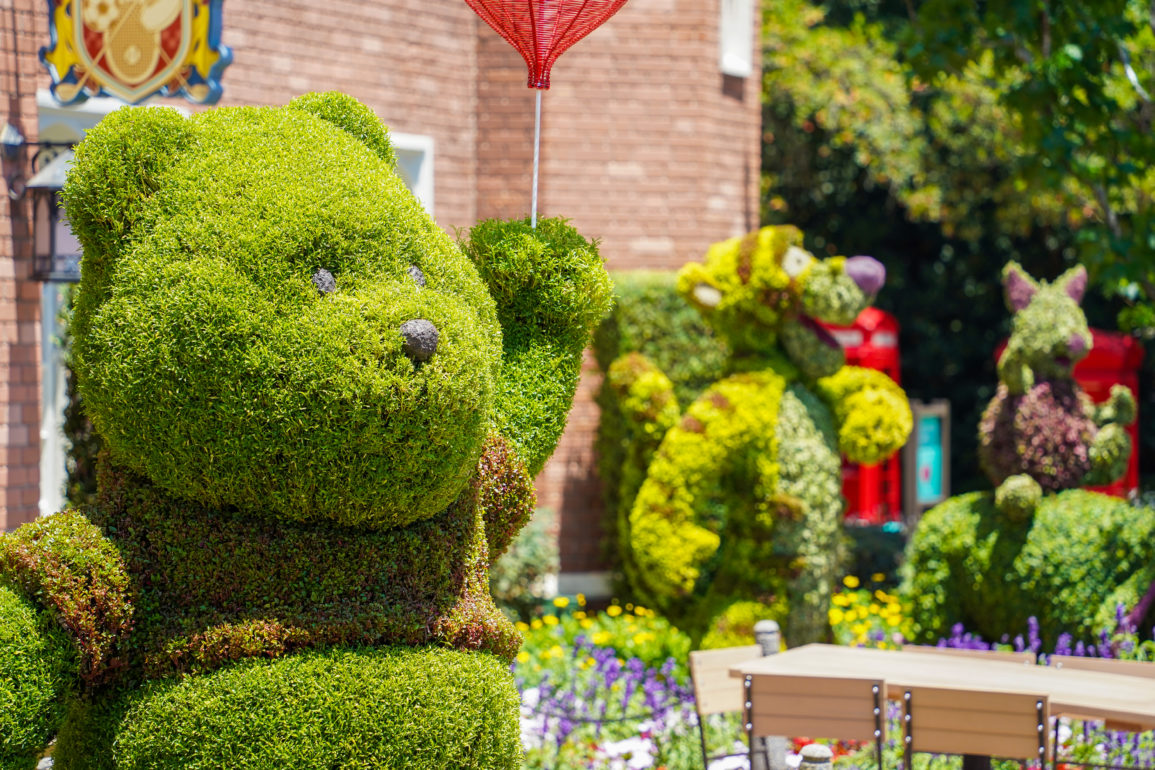 Welcome to EPCOT on a lovely Spring day here at Walt Disney World. As opposed to some stormy weekends we’ve had recently, today was perfectly pleasant and not brutally hot. That makes for a day where characters are out in abundance and we get a good look at the progress of the projects around the park.

First off, the installation of “Points of Light” continues as the small devices wrap around Spaceship Earth.

While we haven’t seen the lights being tested yet, it’s only a matter of time as summer—and Walt Disney World’s 50th anniversary—approach.

Pavement work has shifted from in front of Pin Trading Headquarters to alongside the Spaceship Earth queue, allowing the shop to reopen this past Friday.

Stop us if you’ve heard this one: little has happened at Guardians of the Galaxy: Cosmic Rewind. While small bits of wood have been added over the last week, we’ll almost certainly be tracking the slow addition of sealing layers for another week, with little else to see in the way of progress.

Conversely, “Creations Shop” construction is moving quickly with hopes of a summer opening. If given the choice, we’d have preferred the money and effort were put into opening the attraction for the 50th anniversary rather than the store.

At the primary shopping location of the present, Mouse Gear has brought back a couple summer items from last year.

At Port of Entry, a new embossed Mickey handbag has arrived. The fairly simple bag with a subtle design sells for $39.99.

Also arriving are these not-so-subtle Pizza Planet shorts, priced at $24.99.

In the lagoon, two “Harmonious” barges had arms extended, but were left in a static position for the entirety of the day.

Temporary control booths have been set up in tents, and the breeze allowed us a peek inside. These booths are used to control testing of the barges, like what occurred yesterday.

In the Mexico Pavilion, we’re well past the three month mark of missing the Three Caballeros animatronics.

In Norway, we didn’t need any animatronics as we had a real-life human Anna greeting guests.

Circling back to Italy, Gelateria Toscana opened this week, which means the old gelato stand has been permanently shuttered. Whether the location will reopen with a different type of offering is currently unknown.

Inside The American Adventure, The Soul of Jazz exhibit remains unchanged since the addition of character maquettes in March.

In the Morocco Pavilion, a small door was open at Tangerine Cafe, joining the small door which replaced a larger… structure elsewhere in the pavilion.

Mulan continues to be a part of the Princess Promenade, and will be for the remainder of the month as part of Asian Pacific American Heritage Month.

For the Taste of EPCOT International Flower & Garden Festival, topiaries still have another two months before the end of their run.

The same is true for the large flower installations.

Winnie the Pooh was encouraging us to stretch outside of the Imagination Pavilion, reminding us that simply walking around EPCOT didn’t replace exercise. Thanks, Pooh.

Wrapping up, we naturally finished up at the front entrance of the park.

The timing was just right to catch Goofy in his old meet and greet home, where he spent quite a bit of time before the park closed in March of 2020.

Pluto joined him, and he played a game of hide-and-seek with us behind the bushes.

We hope you’ve enjoyed our trip around EPCOT today. To stay up to date with all of the latest Disney parks news, download WDWNT: The App to your mobile device to receive alerts about the parks you choose.