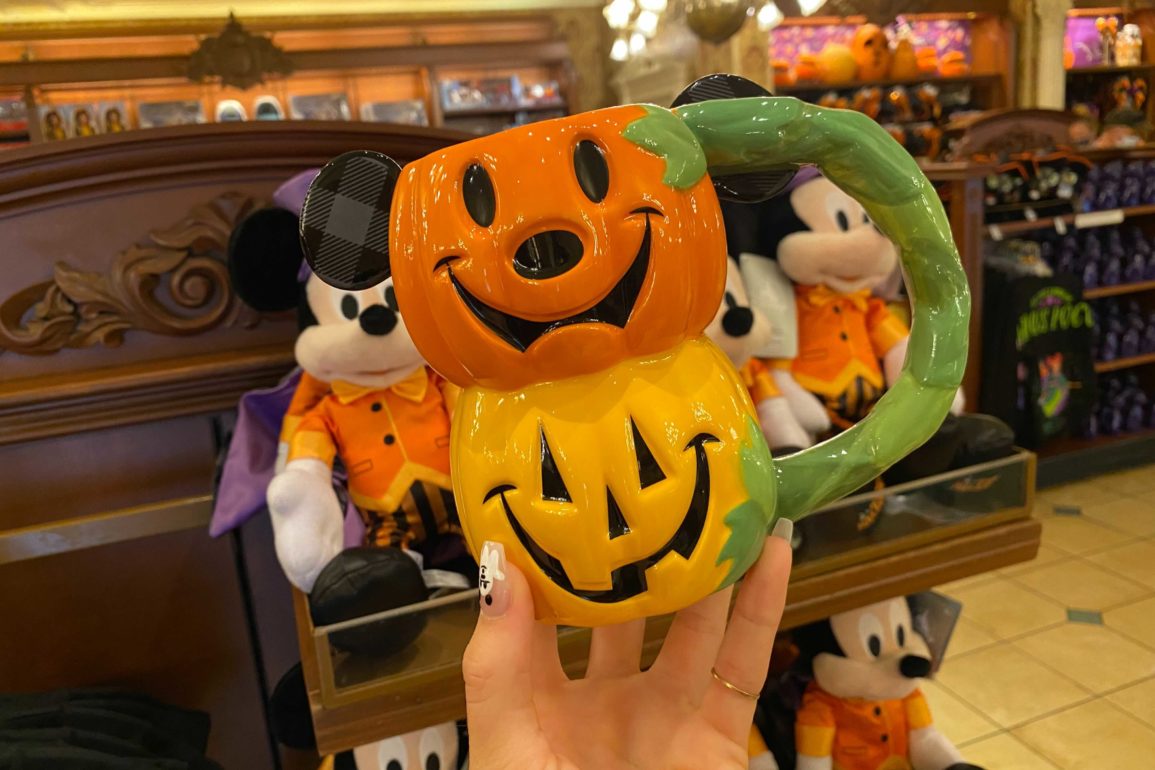 Good morning from a spooky – I mean, gloomy – day at Magic Kingdom! It was cloudy and cool(er) all day which gave us a break from the heat!

Even though all of the top part of the scrim has been removed from the Main Street Train Station, some new black scrim has appeared around the lower portion of the station on both sides.

Oh my gourd! A few new perfect pumpkin pieces arrived in The Emporium this morning. Stay tuned for a look at each item!

Uptown Jewelers had a collection fit for a queen, as the new Stoney Clover Princess Collection made its royal debut on Main Street U.S.A.

Not to be outdone, the Mistress of all Evil cast a spell over the shop as a new park exclusive Pandora charm.

After going missing for quite some time when we started seeing initial changes with the Adventureland entrance sign, the shields are back adorning the bridge with some brighter colors and adjustments.

Adventureland’s jungle green pavement is getting wild as expansion continues. More scoring can be seen on the left as plans for growth extend towards the popcorn cart.

The Liberty Square Riverboat was unavailable as refurbishment begins.

“it’s a small world” receives the smallest new addition of color as more glitter is added to the loading zone and the Eiffel Tower receives purple paint.

One section of pavement for Cinderella Castle remains as the second to last piece was repaved and stamped.

Painting over at Pete’s Silly Sideshow continues with work moving along the sides of the tent to each of the striped panels taped off.

TRON saw movement with its construction progress, literally, as large pieces for the tunnel were hauled around the grounds for installation.

The 7th in the 12 edition series of Stitch Crashes Disney arrived in copious amounts at Star Traders in Tomorrowland.

Over at Disney’s Contemporary Resort, the Cinderella Cupcake that adorns the dessert station at Chef Mickey’s is now being featured as one the desserts for World Princess Week.

Work on the ferryboat docks continues at the Transportation and Ticket Center as new pilings were driven in to the platform.

Disney’s Polynesian Village Resort Monorail station sees more progress as more decorative panels are installed at the station platform and along the outside railings.

Making the trek out to the wilds of Disney’s Animal Kingdom, biometric scanners were back in place at the tapstile entrances.

Green construction walls arrived in between Island Mercantile and the bridge to Pandora.

A new dessert to hit World Princess Week is the Pocahontas Mousse that sailed into Creature Comforts! Stay tuned for our review of this treat that we went bananas over!

Wait times were extremely low in the animal kingdom, where numerous rides were walk-ons with little to no wait times.

Warung Outpost just outside the amphitheater to UP! A Great Bird Adventure Show reopened with its old menu.

The platform for Disney’s Kite Tails debuting this October sits beneath the Forbidden Mountain as parts are still seemingly missing to be installed.

Thanks for following along today as we made our way through the magic of Main Street U.S.A. to the jungles of the animal kingdom!