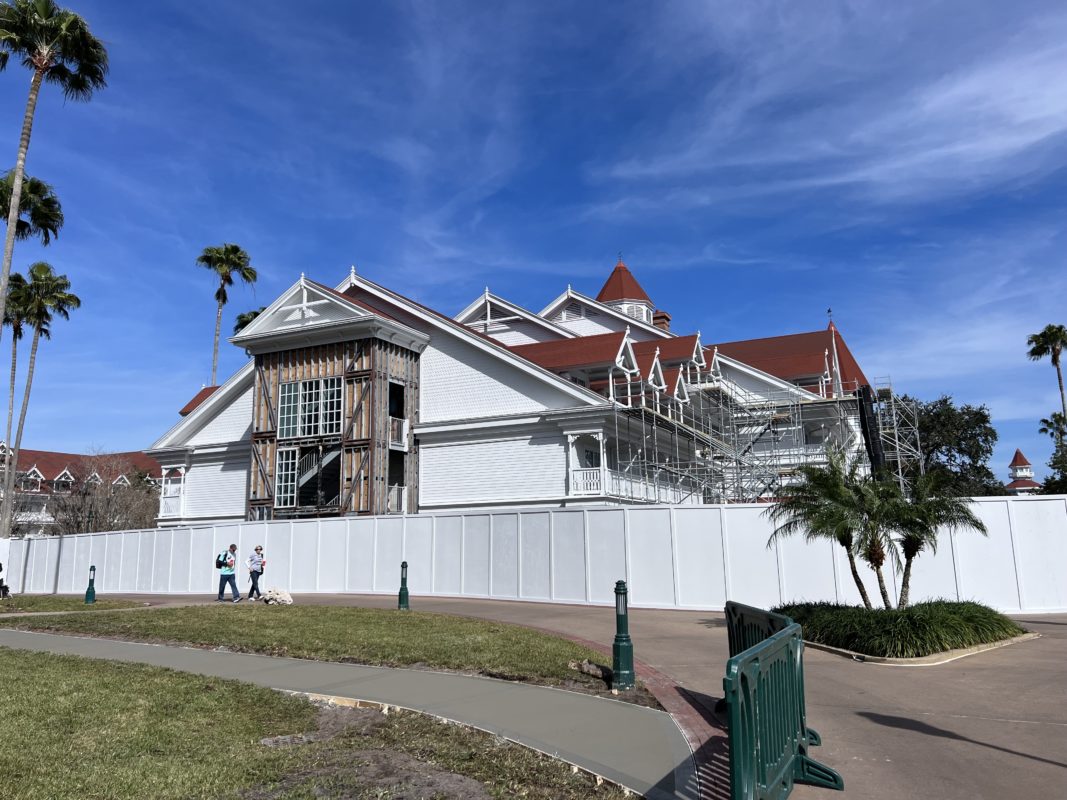 The ongoing refurbishment of Disney’s Grand Floridian Resort & Spa has moved to the Sugar Loaf building. The Boca Chica building reopened in October after a refurbishment.

A new concrete pathway is still drying but will eventually lead to Gasparilla Island Grill.

As we’ve seen on other Grand Floridian buildings, this stairwell is being torn apart and reconstructed.

The steel structure and wood is exposed.

The stairs themselves are still intact.

Another sign directs guests around construction walls for access to the Courtyard Pool, as well as to the Boca Chica and big Pine Key buildings.

Scaffolding covers the front of the Sugar Loaf building.

Crew members have been fixing up the balconies and exteriors of Disney’s Grand Floridian Resort buildings without significantly changing their design.

Though the Big Pine Key building reopened last June, work continues on one of its exterior stairwells.

New paneling was installed, but not all of it has been painted white.

Two cherry-picker vehicles are parked at the bottom of the stairwell.

We also noticed that the Boca Chica sign is different from the others. The lettering is just outlined and not filled in (compare to the Big Pine Key sign above).

Scrim is around the top levels of scaffolding to help shade workers and materials from the sun.

Another stairwell is also covered in paneling that has not all been painted yet.

Railings are also missing from some sections of the stairs. There are temporary wood planks to keep workers protected.

It’s surrounded by construction walls and shingles were removed from most of its roof.

Wires run up the roof and past some tarp-covered boxes.

Around the side of the building on the water, we can see where more shingles have been removed.

Like the other Grand Floridian Resort buildings, Narcoossee’s will probably get its iconic red roof back.

Scrim sheets on poles hang over the sides of the patio.

They seem to be to catch errant construction materials and dust that could otherwise fall into the lagoon.

Ladders lead up to the tower of the gazebo-shaped restaurant.

The scrim runs all the way around the patio.

Some of it is supported by scaffolding in the water.

Reportedly, when now-former CEO Bob Chapek took over the Parks & Resorts division in 2015, he felt that the Grand Floridian was not up to standards. The comparisons to a Four Seasons didn’t befit the current state of Walt Disney World, and so it was no longer suitable as the flagship resort. But rather than shift focus to another resort hotel, the company decided to make changes.

It began with the Enchanted Rose Lounge, which replaced Mizner’s Lounge. It was given a “Beauty and the Beast” theme. Cítricos followed with a new “Mary Poppins”-inspired design. When the Grand Floridian Spa reopened in January 2022, it was revealed that it, too, had been remodeled. All the rooms of the resort are still being updated and some “Mary Poppins” theming has been added throughout guest buildings. The refurbished Victoria & Albert’s opened last summer.

Disney finally confirmed in December that the lobby of Disney’s Grand Floridian Resort would also be updated.