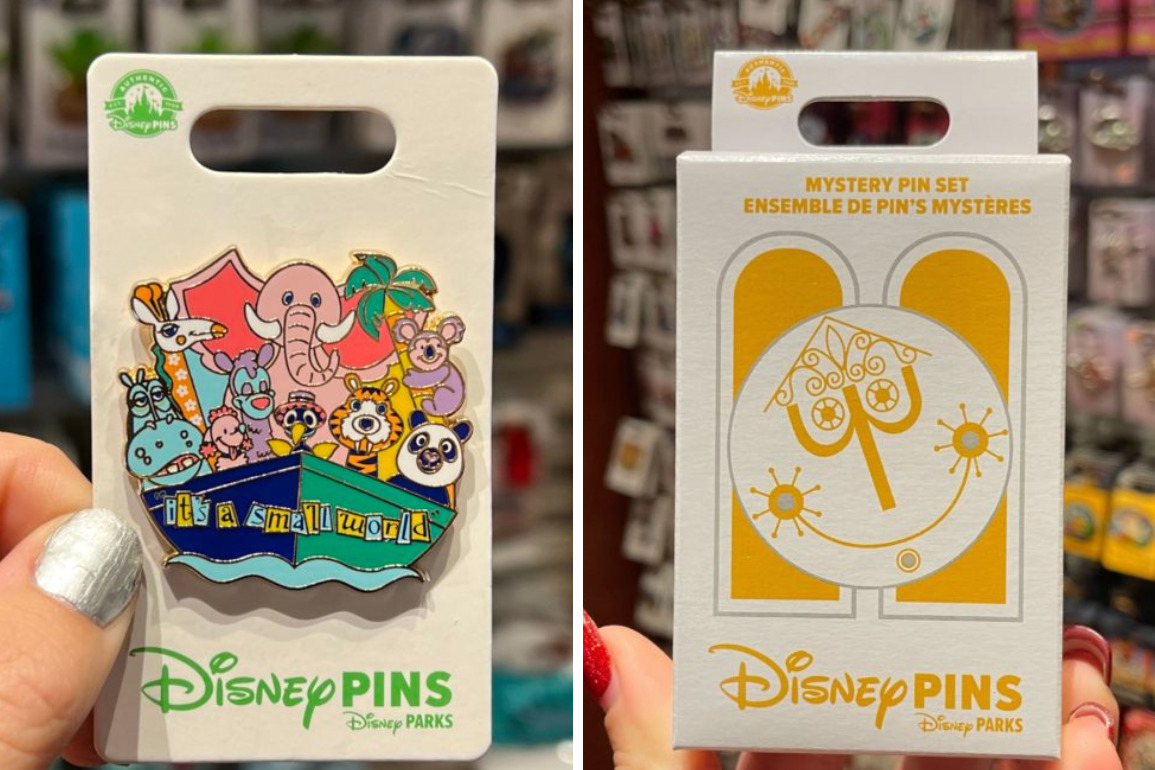 A new “it’s a small world” pin and a set of mystery pins featuring various Disney characters are both now available at Walt Disney World. This set was first available on shopDisney. We found them at Magic Kingdom in the Emporium.

This delightful pin features animals from various scenes all aboard a boat from the attraction. And yes, the hippo is there, along with the giraffe, poodle, llama, elephant, bird, tiger, panda, and koala. The attraction’s logo sits near the bottom.

The front of the box features the smiling “it’s a small world” clock face.

Each box contains two randomly selected pins out of the eight-pin collection.

The pins feature Hercules, Alice and the Mad Hatter, Ariel, Pocahontas and Meeko, Lilo and Stitch, Simba and friends, Mowgli and Baloo, and Cinderella in various “it’s a small world” scenes. While these characters aren’t featured in the Magic Kingdom version of the ride, they are featured in other versions around the world, including at Disneyland and Tokyo Disneyland. It’s been rumored that they would be added to the Magic Kingdom version, but this has yet to happen.

Will you pick up either of these? Let us know in the comments below!

The Disneyland “it’s a small world” got dolls in wheelchairs recently, and similar additions are coming soon to “it’s a small world” at Magic Kingdom and Disneyland Paris as part of Disney’s ongoing diversity and inclusivity initiative, Reimagine Tomorrow. The ride is set to reopen at Disneyland Paris this spring after an extended refurbishment, but it’s unknown if the dolls in wheelchairs will be in place at that time.

“it’s a small world” is not currently on a refurbishment calendar for Walt Disney World. The boats were recently cleaned after accumulating black grime between refurbishments.

“it’s a small world” at Walt Disney World had a major exterior refurbishment in 2020 and a three-day interior refurbishment in July 2021. After the refurbishment, the interior façade around the load area was gradually repainted with bright colors replacing most of the white and gold. The clock tower was the first to be repainted and reveal a new look. The “5” and “0” were given a different shade of gold in celebration of the 50th anniversary of the Magic Kingdom.

Some of the gold and white was brought back later into the repainting. It was seemingly completed in September 2021.

Pinocchio Village Haus, a restaurant that has windows overlooking the load area of “it’s a small world,” has been serving treats themed to the attraction as part of the 50th anniversary. The latest is a Polynesian-inspired Malasada dessert featuring the “Aloha” sign from the ride’s finale.

If you need a little dose of “it’s a small world” at home, watch our full ride video below. You can also see a video review of the attraction-themed game by Funko here.