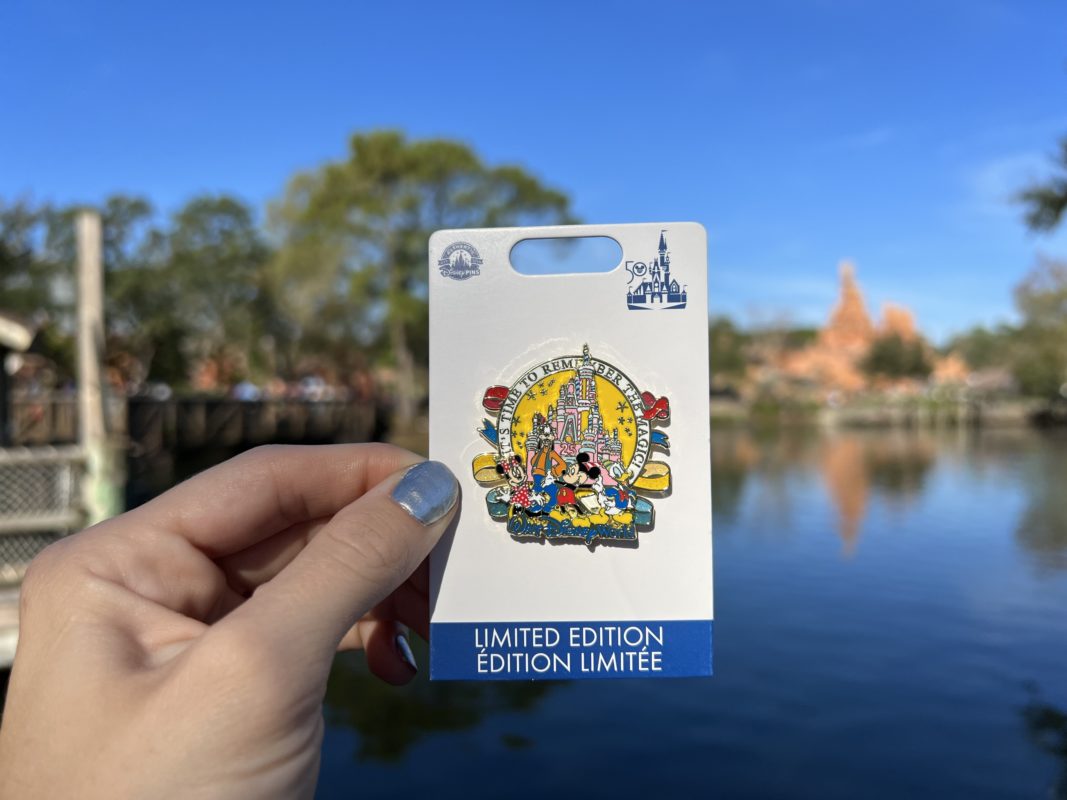 Good news for those lamenting that the recently released 25th anniversary shirt and hat neglected to include the iconic Cinderella Castle Cake! A new Vault Collection pin has been released featuring the Castle Cake. We first found it at Frontier Trading Post in the Magic Kingdom.

The 25th anniversary of Walt Disney World featured, most famously, the end of Main Street dominated by the redecorated Cinderella Castle. The castle had become a large pink cake covered in frosting and candy décor, with the spires replaced with candles. There were fittingly 26 of them, one for each year of the park’s existence and one to grow on.

The castle stands against a yellow backdrop on the pin. The 25th anniversary motto, “It’s Time to Remember the Magic,” arches behind it, with red, blue, yellow, and teal “ribbon” on the sides. Mickey, Minnie, Goofy, and Donald stand in front of the castle and atop a blue “Walt Disney World” text logo.

To celebrate, there was also a parade called “Remember the Magic” for the anniversary.

As part of the Walt Disney World 50th anniversary merchandise, the Vault Collection has slowly been working through items celebrating previous anniversaries. Merchandise is now available for the 25th anniversary, which took place in 1996 (through January 1998).

Check out some of the previous anniversaries’ merchandise below:

Walt Disney World celebrated its 50th anniversary on October 1, 2021, and The World’s Most Magical Celebration is still going. Disney recently confirmed the festivities will end on March 31, 2023. Still need to catch some of the fun before it goes away? Check out our full guide to everything new for the 50th anniversary. And, of course, the end of the anniversary comes with its own line of merchandise: the Grand Finale collection.

Like the 25th anniversary, the 50th celebration included a new look for Cinderella Castle (though somewhat subtler than a cake). The castle received a makeover with new pink and blue paint, EARidescent gems, bunting, spire decorations, and a 50th logo emblem over the clock. At this time, it’s unknown if the castle will be repainted upon the end of the celebration or if just the decorations will be removed.

Want to learn more about the 25th anniversary of Walt Disney World? You can read our detailed retrospective on the celebration in our 1996 edition of Timekeeping and watch the video below.

Did you visit Walt Disney World during any of its anniversaries? “Remember the Magic” with us in the comments.

BREAKING: runDisney Half Marathon Weekend Returns to Disneyland Resort in 2024