While the Coronavirus (COVID-19) pandemic may have “halted production” at the Disney Parks, we’re celebrating the films and television shows on Disney+ that remind us of the parks we love. Today’s playlist is inspired by the lights, camera, and action of Disney’s Hollywood Studios! Ready when you are, C.B.! 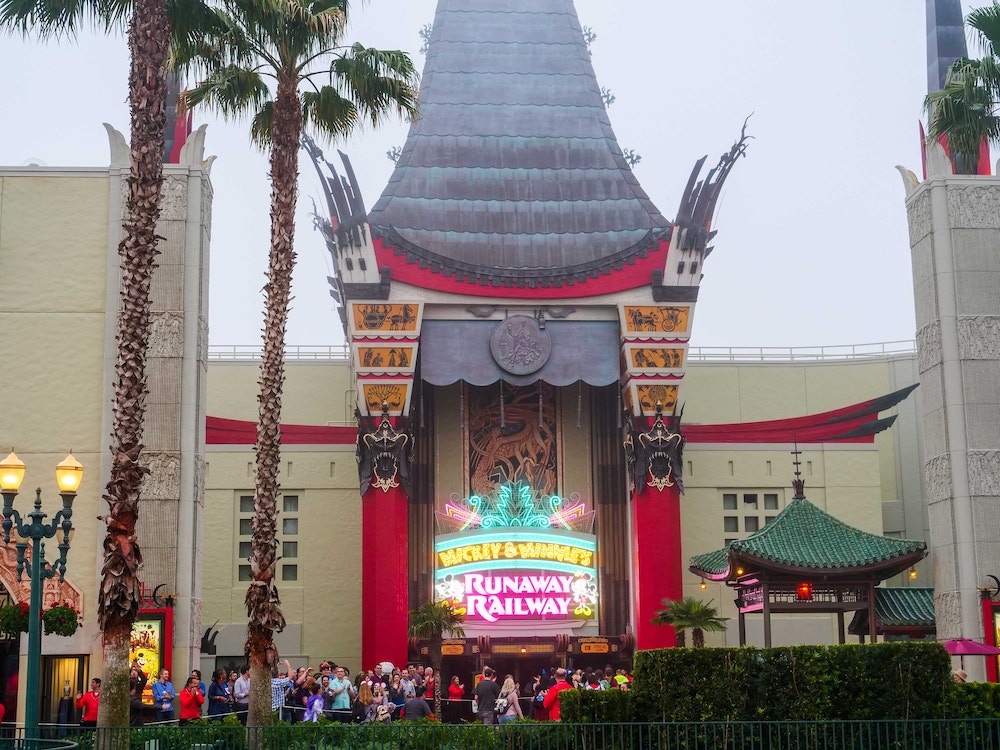 Naturally, each of these parks is covered in the Disney+ Original Series “The Imagineering Story.” If you want to see some of the stories behind the creation of Disney’s Hollywood Studios, be sure to check out Episode 3, “The Midas Touch.” 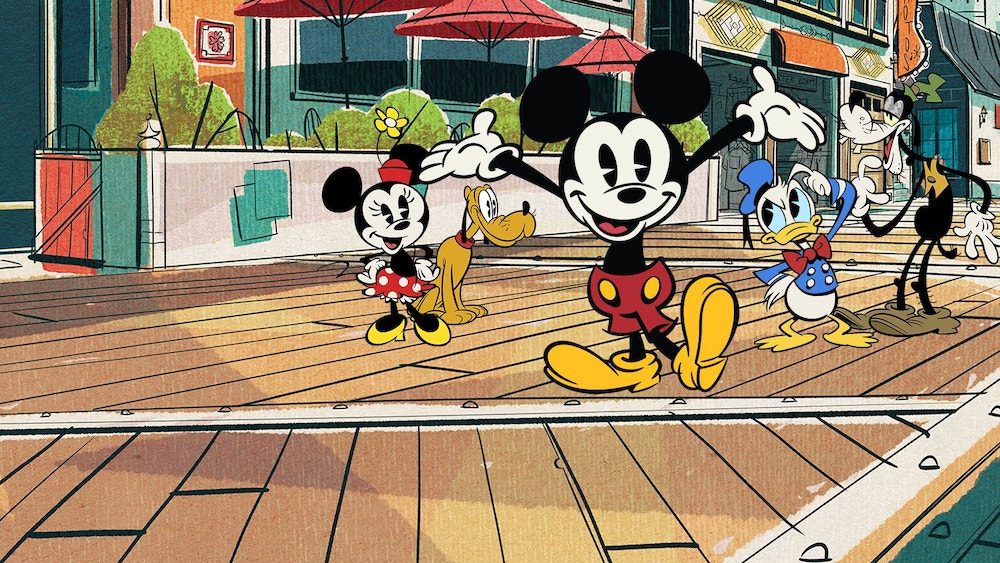 If you’ve been reading WDWNT since the start of March, you probably know that the star attraction of Hollywood Boulevard is now Mickey & Minnie’s Runaway Railway. And if you’re looking forward to your first ride, or can’t wait to ride it again, be sure to enjoy some of the “Mickey Mouse” shorts available on Disney+. (Parks fans will particularly enjoy “Potatoland,” which pays tribute to several iconic Disney Parks attractions.) If you find yourself awestruck at the glamour of old Hollywood and the Chinese Theatre, I highly recommend Saving Mr. Banks, based on Walt Disney’s efforts to convince P.L. Travers to let him bring Mary Poppins to the big screen, which features the Los Angeles landmark in its climax. 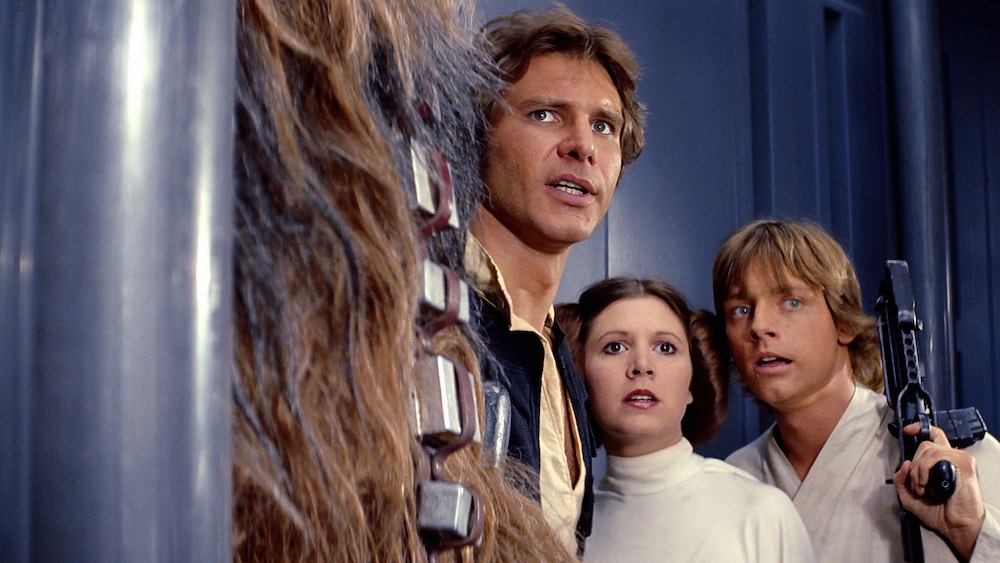 While Echo Lake boasts several attractions, only one ride calls it home, and that’s Star Tours – The Adventures Continue. Since that attraction takes you to worlds scattered throughout the films of the Star Wars saga, it only feels right to recommend the original trilogy, each etched in the annals of great film: Star Wars Episode IV: A New Hope, Star Wars Episode V: The Empire Strikes Back, and Star Wars Episode VI: Return of the Jedi. And if you’d like to know more about how this iconic trilogy was made (and are ready for a good, long movie), try Empire of Dreams: The Story of the Star Wars Trilogy. Only a meteorite’s throw away is the Sci-Fi Dine-In Theater Restaurant, and nothing pairs quite so well with a hearty dinner than a goofy sci-fi B movie, and 1978’s The Cat from Outer Space fits the bill quite well. 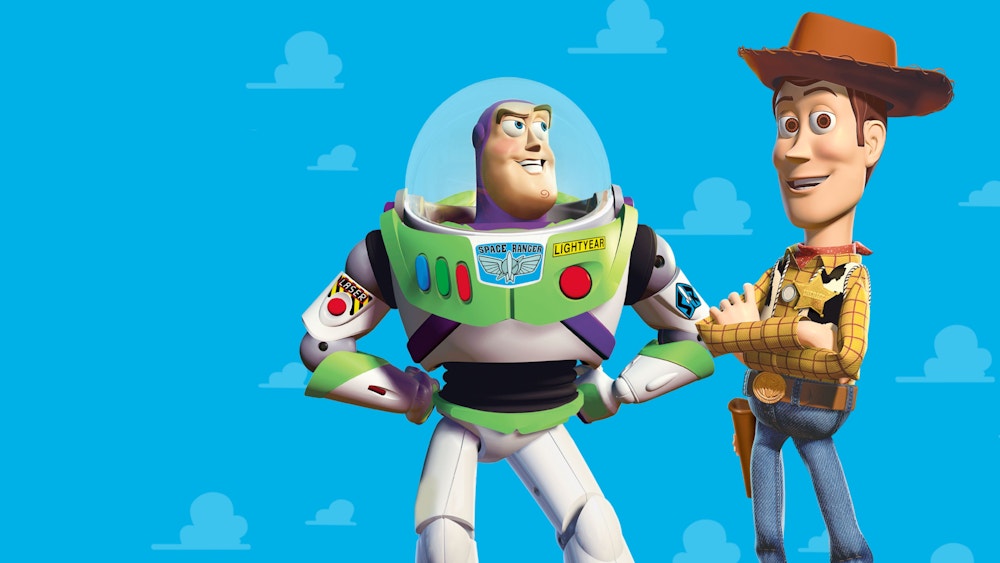 So what do you think I’ll recommend to watch for Toy Story Land? Odds are, you’re probably right! Yes, Disney+ is the streaming home of all four Toy Story films: Toy Story, Toy Story 2, Toy Story 3, and Toy Story 4. Of course, if those movies aren’t enough for you, the toys are back with some Disney+ exclusive shorts, including the series “Forky Asks a Question” and the short film Lamp Life. There’s plenty of Toy Story to go around! 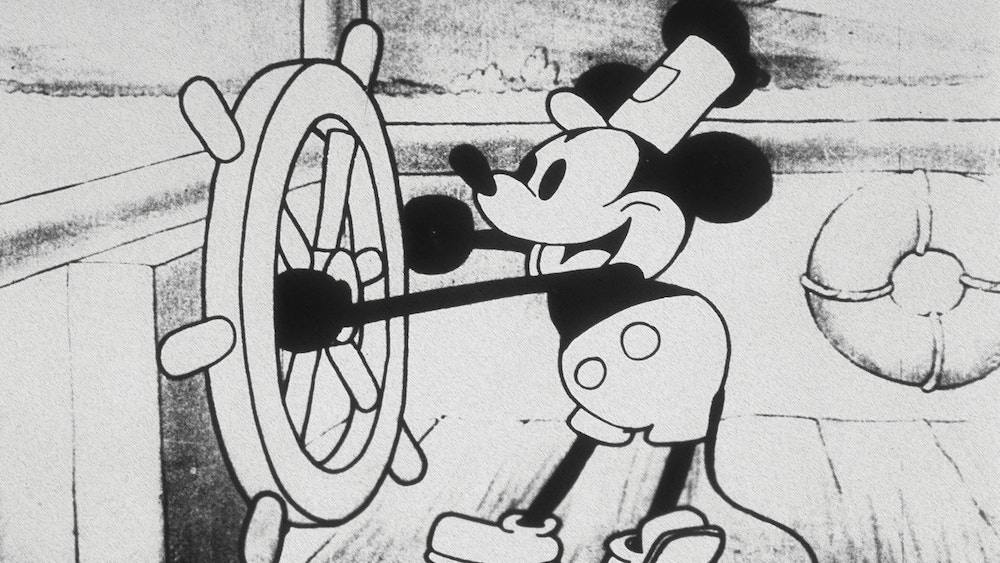 While there are dance parties and bays to launch in Animation Courtyard, we should never forget how it all began: with a man named Walt. And as Walt Disney Presents shows off the history and milestones of The Walt Disney Company, Disney+ offers Disney’s film milestones, such as Steamboat Willie, which introduced the world to Mickey Mouse. Other Walt-themed recommendations include The Plausible Impossible, an episode of the “Disneyland” anthology series where Walt himself shows off the principles and technologies his studio used to produce animation, and The Reluctant Dragon, where Robert Benchley takes a tour of the Walt Disney Studio before pitching his idea to Walt himself. Of course, if you want to flash ahead and see some of Disney’s characters aimed at the younger set, the stars of the Disney Junior Dance Party are also on Disney+, including “Doc McStuffins,” “The Lion Guard,” “Vampirina,” and “Mickey and the Roadster Racers.” And don’t worry, you can still enjoy “The Little Mermaid Live!” From classic animation to what’s new, there’s plenty to choose from. 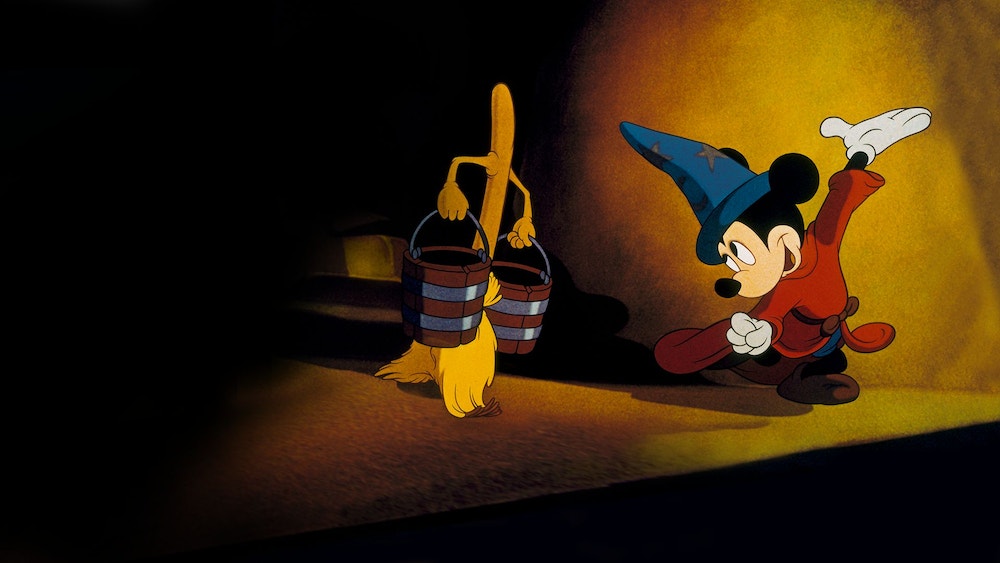 From elevator rides to the fifth dimension and a rockin’ tour of the City of Angels, Sunset Boulevard is home to high action and adventure. And when the day comes to a close, people gather at the Hollywood Hills Amphitheater to enjoy Fantasmic! So if you want to see Sorcerer Mickey work his magic, there’s always the classic Fantasia. And see “The Sorcerer’s Apprentice” a second time with some more beautiful animation with Fantasia 2000! Or maybe you want something more intense. Maybe you want to rock out. Try Sultan and the Rock Star, which features a rock star hanging out with a tiger. Intense enough for you? 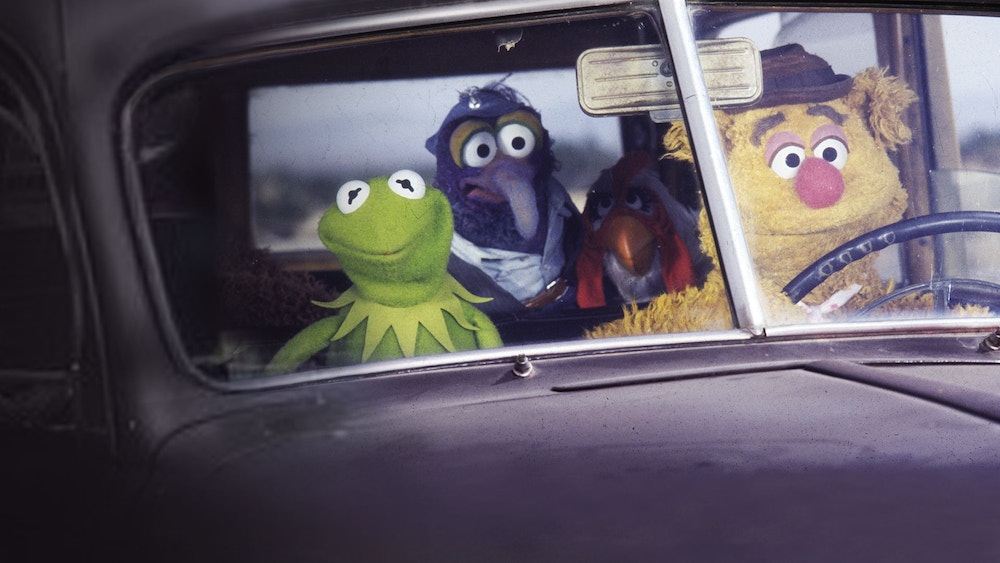 Grand Avenue may only be home to one attraction, but it’s a great one. While we may not be able to enjoy Muppet*Vision 3D right now, there’s plenty of 2D Muppet mayhem on Disney+. You could always start out with that timeless classic, The Muppet Movie, before watching the Muppets hop a flight to London (ninth class, of course) and foil a robbery in The Great Muppet Caper. Looking for something a little more sophisticated and a little less seasonally appropriate? It’s always a good time for The Muppet Christmas Carol, or set sail for adventure with Muppet Treasure Island. Head back to Hollywood to save the Muppet Theater with Jason Segel and Amy Adams in The Muppets, and then head back to Europe to foil another robbery (and watch Kermit the Frog escape from prison) in Muppets Most Wanted. If that doesn’t fill your Muppet quota, give the short-lived 2015 ABC series a try. The world needs more Muppets in it, so why not start with your watching habits? 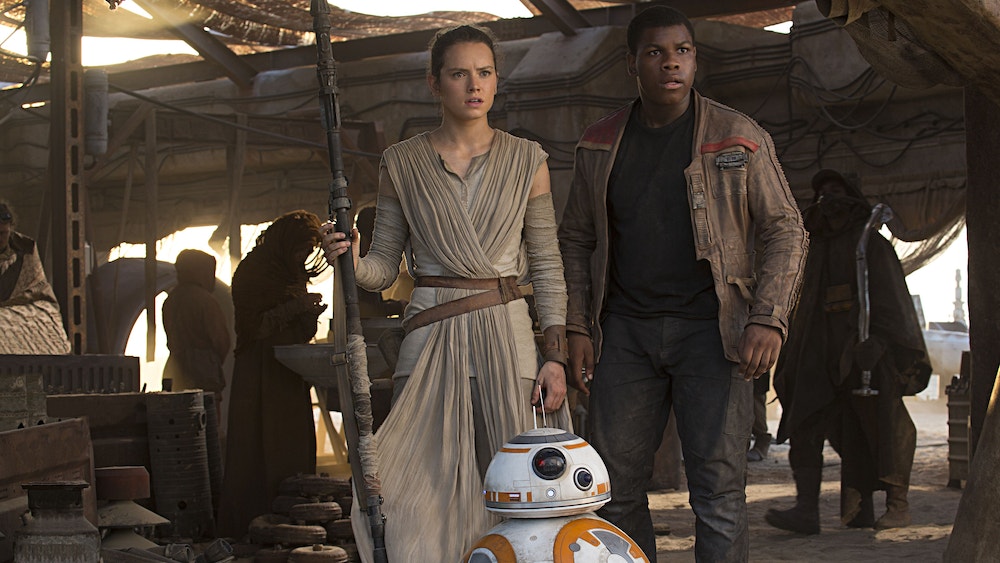 There is one good thing to come out of the parks being closed: you don’t have to get up super early to get a boarding group. Instead, sleep in and rise with the Resistance by watching two recent films in the Skywalker saga: Star Wars: The Force Awakens and Star Wars: The Last Jedi. See how Rey and Finn’s journeys began, and watch them become the Resistance leaders guests encounter around Black Spire Outpost. And while the final chapter of the sequel trilogy, Star Wars: The Rise of Skywalker isn’t on Disney+ yet, given recent trends, it’s likely to not be far, far away. 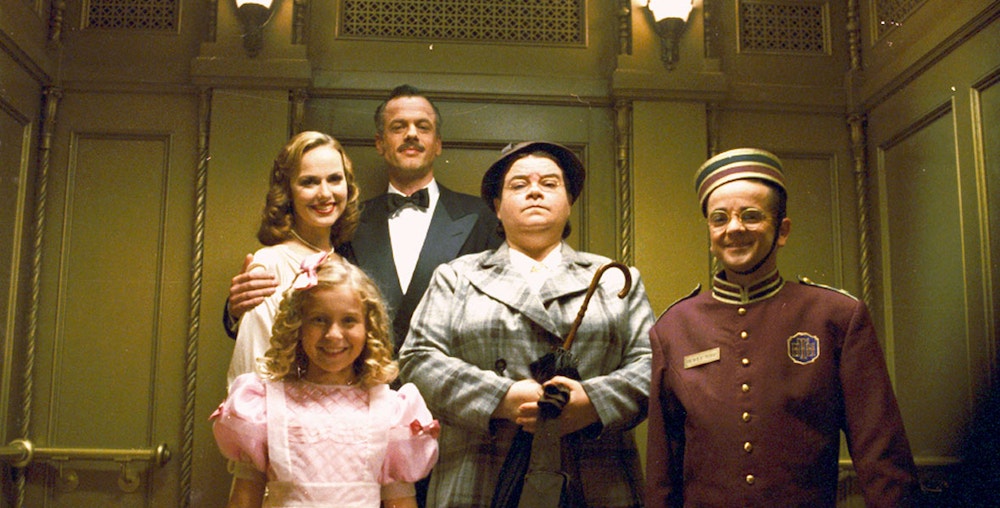 Of course, fans of the park know that films and television shows were once made at the park. For a look back at an era when it was a working studio as well as theme park, check out animated films like Mulan, Lilo & Stitch, and Brother Bear, all made at what was then the Disney-MGM Studios, and all on Disney+. For live action, look beyond Disney+ for Ernest Saves Christmas, Oscar, Passenger 57, Marvin’s Room, and the miniseries “From the Earth to the Moon.”

And that’s a wrap for our steaming tour around Disney’s Hollywood Studios. If you want more recommendations, check out our playlists for the Magic Kingdom and EPCOT. Keep reading WDWNT as we visit the final park at Walt Disney World! It’s going to be wild!