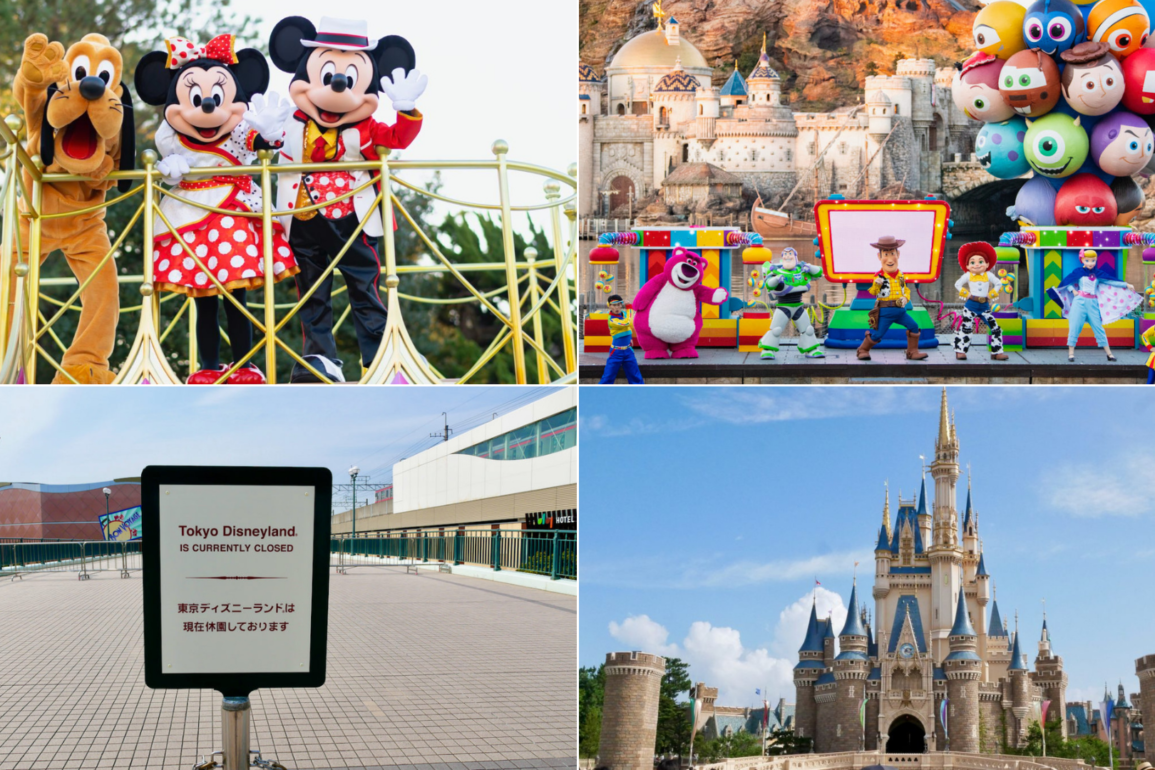 Let’s be honest, no matter where you were in the world this year, 2020 was probably pretty chaotic for all of you, and the first part of 2021 seems to bring with it a glimmer of hope for the coming end of these compromises. So in the end of what has quickly become a landmark year of our lives, let’s look back at what happened here specifically in Japan!

Tokyo Disneyland started the year off strong with the Very Very Minnie event, a tribute to both Minnie Mouse and popular past special events from Tokyo Disney Resort!

The cornerstone of the event were its two shows—Very Minnie Remix, a short mini-parade featuring dancing show stops from events past that changed daily along the parade route, and It’s Very Minnie, a loving tribute to the fantastic special events and past daytime shows put on over the past 20 years at Tokyo Disneyland and Tokyo DisneySea.

Featuring adorable food creative merchandise as well, the event was immensely popular with longtime fans of Tokyo Disney Resort and set the park up for an exciting winter, usually a slow time at the parks. You can watch our full video of It’s Very Minnie from preview day below!

Things were a bit different over at Tokyo DisneySea, with the third and final year of the Pixar Playtime event. The essence was that the Pixar pals would come and take over Tokyo DisneySea, with entertainment, decals, and merch galore celebrating them. Three shows were presented around the park—Pixar Playtime Pals was a cute show where Guests would participate in little dance moves along with other Pixar characters in a faux-competition. Chef Remy & You would see a group of chefs trying to create a recipe and going horribly wrong, before Remy from Ratatouille would save the recipe and the day. And easily the most fun of the three, Lightning McQueen’s Victory Lap would see the iconic racecar from Cars drive around American Waterfront and involve Guests in chanting and dancing!

The event wasn’t anything particularly special to talk about in all honesty, but at least they had some cute food and merchandise ideas!

Before we get into the more depressing news, let’s talk about the Duffy & Friends Liner, which ran for more than half the year! The entire interior was decorated top-to-bottom with decor themed to each of Duffy’s friends! Each of them got their own entire car (except the main bear himself, who received both the front and back vehicles), complete with reupholstered seating made from the same material as the stuffed animals sold in stores!

And every vehicle had its own themed handstrap, with these featuring Gelatoni’s cat ears and beret. You can check out a full tour here from back in February.

It was the beginning of January when the first signs of what was to come appeared. In a stark contrast to typical Disney Look at Tokyo Disney Resort, Cast Members were allowed to wear a face mask while on-stage if they so desired. This was just a few days after both Shanghai Disneyland and Hong Kong Disneyland closed over the outbreak of what we came to know as COVID-19. Unlike in the US, wearing a mask has long been commonplace in Japan, but until now had not been allowed for Cast Members while on-stage.

Right at the end of January, the Oriental Land Company chose to suspend all face character greetings over worries about COVID-19, including at Ariel’s Greeting Grotto, already scheduled to close permanently on March 31st. At the time, 14 cases had been confirmed nationally.

The inevitable finally came on February 28th, when the Oriental Land Company announced that they were closing the entire resort (except the hotels) down for two weeks. That means Tokyo Disneyland, Tokyo DisneySea, and Ikspiari, all closed from February 29th through March 15th. Two weeks to beat the virus, no sweat! Then it was extended to early April. No, April 20th. Wait, mid-May. You know what, just make it “until further notice”. Or even a vague Japanese business-sounding buzzphrase like “until external and internal conditions have been readied”.

And the crazy thing in hindsight is that we all believed it would be over after two weeks! OLC themselves believed in all of these dates to the point that they put up the Easter 2020 decorations at Tokyo DisneySea and were rehearsing Tip-Top Easter in Mediterranean Harbor.

If you want a look back at what the parks looked like during the closure, we took a special trip at the very beginning.

Well technically, Fantasmic! at Tokyo DisneySea had its actual final performance on February 28th, which you can watch above. The show, loosely based on the original Disneyland production (and later serving as inspiration for the 2017 refurbishment) featured a battle for control of Mickey Mouse’s imagination and truly represents a different (but still excellent) direction for the show. The show is believed to be somewhat cursed, originally scheduled for debut on April 23rd, 2011 as part of the park’s 10th anniversary celebration but instead coming five days later on the 28th, the same day the park reopened after sustaining damage during the 2011 Great East Japan Earthquake, the resort’s last long-term closure. Its end, cut short by the COVID-19 pandemic, certainly lends credence to the theory.

Cinderella Castle underwent a massive six-month refurbishment from October 2019 through April 2020 (pictured here in August) which brought it in line with Florida’s old look, complete with blue zigzags on one of the structure’s central towers. While it certainly wasn’t great to see the castle covered for so long, we’re happy to have the “classic” look compared to the pink… thing in Florida.

Another long project that finished up in April was the reconstruction of Tokyo Disneyland’s entrance plaza. The two year project, which began in April 2018, brought a complete top-to-bottom new look for the entrance that had barely been touched since the park opened in 1983. Now, the plaza is more open and features more turnstiles for Guest access (albeit with much less shade for Tokyo’s brutal summers or prolonged rainy season). You can check out a tour of the plaza’s new look here.

Ikspiari, essentially Tokyo Disney Resort’s version of Disney Springs or Downtown Disney but indoors and mainly geared towards fashion for younger women, reopened exactly one month ahead of the two theme parks on June 1st. The complex was the first facet of the resort to resume business, after the Disney Hotels had closed on April 1st. You can check out our tour of Ikspiari after reopening here on WDWNT.

The good news we’d waited months for finally came on June 22nd, when we finally knew when Tokyo Disneyland and Tokyo DisneySea would reopen—July 1st! While many shops, restaurants, and even some attractions remain closed even now, having the parks open for people to experience after 122 days of closure was just the news we needed to make this a fantastic summer! Tickets were initially incredibly difficult to get, with park capacity originally set at 15%. Fortunately, we had a few friends of the site make it into the parks on opening day, and they gave us an insight to how the parks were operating. You can also check out our full presentation on social distancing methods from just before reopening, featuring photos and videos provided to us by the Oriental Land Company.

The happy news kept coming at the beginning of July, with the new Type-C monorails, announced last year and originally set to debut in May, finally coming into service on July 3rd!

The new monorails feature interiors inspired by Mickey Mouse from top to bottom, including larger versions of the iconic Mickey-shaped windows, seats inspired by his red shorts, and Mickey Mouse handstraps! You can check out our full photo and video tour here.

In one of the first major steps back toward normality, Tokyo Disney Resort resumed its nightly (but very short) fireworks show Disney Light the Night on September 1st.

The show, which takes place over both parks, features “Live the Magic” from the Disneyland 60th Anniversary Diamond Celebration along with several classic Disney tunes to cap off the day.

Tokyo Disneyland also resumed nightly performances of Nightfall Glow. Typically shown on rainy evenings when Tokyo Disneyland Electrical Parade: DreamLights can’t be held, the parade consists of four floats and is over within 10 minutes, but acts as an excellent tester for determining when resuming full-length parades like Dreaming Up! and DreamLights is feasible and safe.

Probably the biggest story of the year by far and away, the long-awaited New Fantasyland expansion opened to us at Tokyo Disneyland on September 28th (fittingly exactly seven months after the parks closed). The massive expansion features three attractions (so far): The Enchanted Tale of Beauty and the Beast, a trackless ride-through retelling of the classic 1991 animated film featuring mind-blowing effects and animatronics, The Happy Ride with Baymax, a Mater’s Junkyard Jamboree clone featuring six very catchy and specially-composed songs that are timed with multicolor lights, and Minnie’s Style Studio, a special meet-and-greet with the main mouse herself, featuring four outfits that change by the season!

We were there during the soft open and on opening day, with tours and reviews of everything throughout the land! You can find reviews for all of the food at La Taverne de Gaston, the land’s signature counter-service eatery, and The Big Pop, the first dedicated popcorn shop at Tokyo Disney Resort, here on WDWNT.

And of course, you can experience New Fantasyland for yourself through our YouTube channel, including The Happy Ride with Baymax, Minnie’s Style Studio, La Taverne de Gaston, and the incredibly well-themed Village Shops!

The Oriental Land Company is known for doing a lot of things right, but the treatment of Annual Passholders is definitely not one of them. When the parks’ reopening was announced, a lottery was promised for passholders along with an extension in the future. The lottery system, while aggravating, worked relatively well. But eventually, the Oriental Land Company decided that instead of extending Annual Passports, they would just cancel the entire program and give everyone a refund. Now, the only way to visit the parks is to buy a one-day ticket.

And that brings us to today, the end of the year. Its been probably the most chaotic year ever for the Tokyo Disney Resort parks, certainly this isn’t the year-end review I expected to write back in January. Next year is the 20th anniversary of Tokyo DisneySea, but the only thing we’ve heard so far is that a new nighttime show is set to come to the park sometime next year, and the Toy Story Hotel‘s opening window is 2021 as well. We have no idea when stage shows or parades will be back. For now, we can only hope that this time next year, things are finally back to normal. Thank you for reading WDW News Today’s coverage of Tokyo Disney Resort this year, from the bottom of my heart. Have a safe and happy new year!