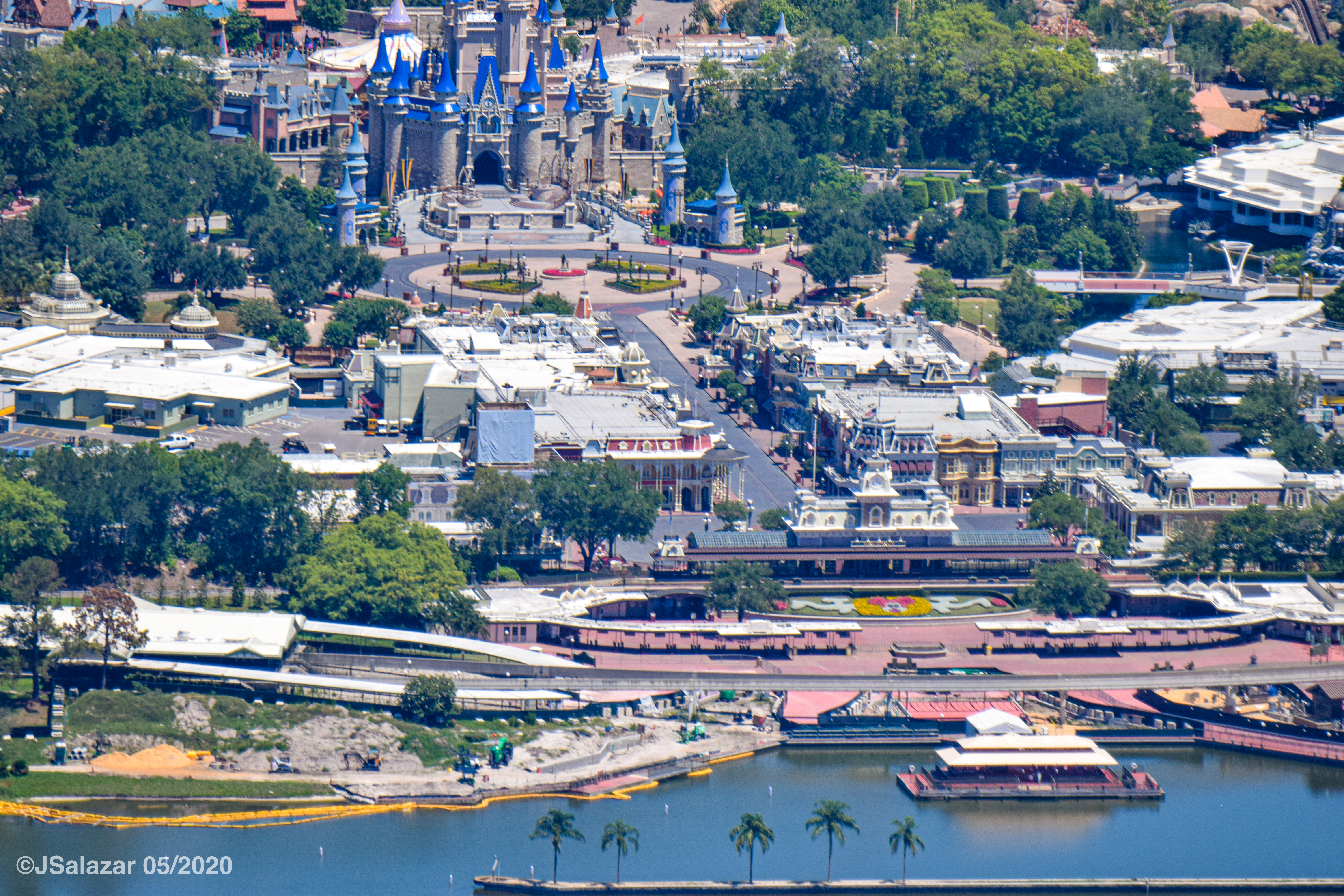 PHOTOS: Survey a Fully Empty Park With Stunning New Aerial Images of the Magic Kingdom During the Extended Parks Closure

As Walt Disney World remains closed for the longest period in the resort’s history, aerial photographers have been able to capture just what the Most Magical Place on Earth looks like without guests. Thanks to pilot Jonathan Michael Salazar on Facebook (also @ColombianPilot on Instagram), we’re able to show these photos of the Magic Kingdom and how things stand at the moment.

While this toll plaza would normally be packed with guests, all that populates the area now is essential security staff.

With construction all but completely ground to a halt around the resort, below, you can see site of the former Walt Disney World Speedway and the state of the planned Magic Kingdom parking expansion and storm water improvements.

Given how big it is, that’s one very un-hidden Mickey!

Below, you can see just some of full Walt Disney World bus fleet currently parked in the lots of the Magic Kingdom.

Moving on to the Transportation and Ticket Center, improvements to the complex, including new security screening areas and a new tram turnaround, are nearly finished.

I can’t wait for the day when guests can finally begin their visit to the Magic Kingdom (or hop a monorail to EPCOT) here.

Next, we see what’s going on with the park’s entrance enhancements. When completed, it will include new boat docks, a new walkway to and from Disney’s Contemporary Resort, and a shaded screening structure (half of which opened late last year).

Along the upper right hand side of the above photo, construction of the new walkway from Disney’s Contemporary Resort is still in progress. In the far upper right hand corner is the Tomorrowland berm for the Walt Disney World Railroad, which recently got new tracks laid after it was re-routed to accommodate the construction of TRON Lightcycle Run.

Even the floral Mickey Mouse seems to have “quarantine beard,” with it looking slightly grown-in. Meanwhile, cast parking is being occupied by essential cast members.

Above, the refurbishment of City Hall continues in the center-left part of the photo, while the Main Street, U.S.A. bypass near Casey’s Corner can be seen toward the right.

With most construction halted during the shutdown, the repainting of Cinderella Castle has been left unfinished, with crews hopefully returning soon. All of the high-reaches being used for the project are parked along the castle’s drained moat.

To this day, the sight of a fully empty hub is still an eerie one.

In the upper left-hand quadrant of the photo above, you can see the scaffolding and scrim still up along the Tomorrowland vertical supports that line all the way to Tomorrowland Terrace.

The construction shutdown due to the COVID-19 pandemic has even extended to TRON Lightcycle Run. If you look at the close-up below, you can see the the tracks of the Walt Disney World Railroad in the upper left hand and lower right hand corners, which will run through the canopy of the new attraction.

And if I may do my best Jungle Cruise skipper impression: “Ladies and gentlemen, I present to you: the backside of Space Mountain!”

Even Seven Dwarfs Mine Train is deserted. I guess the mine must also be closed!

If you want to check out a part of the Magic Kingdom that we rarely get to see, you can just barely make out the underwater track beneath the Rivers of America for the Liberty Belle riverboat in the photo above. Elsewhere, in the upper left hand corner is recently-opened Liberty Square Market outdoor seating area.

We’d like to thank Jonathan Michael Salazar (who you can find on Instagram at @TheDisneyPilot) for taking these aerial photos. We can only hope it won’t be too much longer before we can walk right down the middle of Main Street, U.S.A. once again!