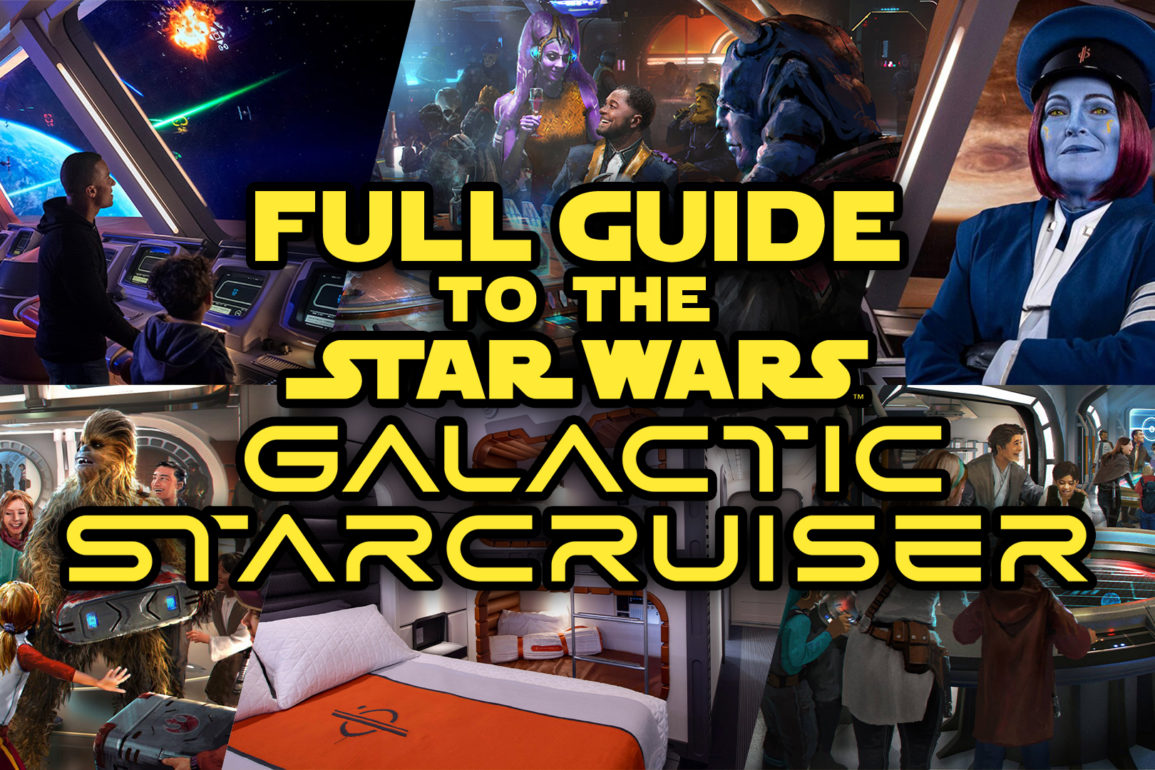 Welcome to our full guide to the Star Wars: Galactic Starcruiser. We will be on the Starcruiser’s first two public voyages and will continually update this guide during our journey to a galaxy far, far away. This guide will be free of any major spoilers for the experience and the story, but the linked articles will contain full spoilers for each subject.

There are three cabin types: Standard Cabin, Galaxy Class Suite, and Grand Captain Suite. The voyage price varies depending on the cabin type and number of guests.

For a full photo and video tour that explores all the details of the standard cabin, click here.

We also took a full photo and video tour of the Galaxy Class Suite, which you can check out here. There are some spoilers for fun “Star Wars” elements within the cabin in this article.

One of the extra add-ons aboard Star Wars: Galactic Starcruiser is the special Captain’s Table add-on. This add-on will be $30 per person, plus tax, on one night.

Guests can also add experiences to their Batuu excursion, including building a droid at Droid Depot, building a custom lightsaber at Savi’s Workshop, or securing a reservation at Oga’s Cantina.

A private PhotoPass opportunity, the “CSL Portrait Experience,” is also available and must be pre-booked.

Disney Vacation Club members must book at least one person in their party using points. Two nights in a standard cabin will start at 295 points per adult. The exact points cost will go up depending on the day of the week, the time of year, and cabin type.

Star Wars: Galactic Starcruiser guests with special dietary or allergy-friendly requests will need to visit the Crown of Corellia Dining Room between 1:00 p.m. and 4:00 p.m. on the first day of their voyage for a consultation.

Star Wars: Galactic Starcruiser guests can purchase exclusive costumes and other items to be shipped to them prior to their cruise, so they can arrive “in-character” if they wish.

All the Characters You Can Meet on the Halcyon

“The Halcyon starcruiser is the jewel of the Chandrila Star Line. Onboard the 100-cabin Corellian MPO-1400 model starcruiser, you’ll voyage to the far reaches of the galaxy in legendary comfort and style. Recently refurbished and reoutfitted, the Starcruiser combines modern conveniences with the romance of the age of exploration.” ― Chandrila Star Line. Learn the ship’s full history in our article.

Check Out a Map of the Halcyon

The map will be available to guests on their “Datapad.” Guests have access to “decks” 4 – 7. Cabins are located on decks 4, 5, and 7. The atrium and most public areas are on deck 6.

The example itinerary shows when certain activities, meals, and more may take place. As it is just an example, the itinerary might be slightly different on your cruise. It will be available to guests on their “Datapad” prior to boarding and throughout their voyage.

Learn About Activities On Board

Disney released full descriptions of the activities available onboard the Halcyon, which include lightsaber training, bridge ops training, Sabacc lessons, and a costume fashion show.

Learn How to Use Your Exclusive Databand / MagicBand

Included with every Star Wars: Galactic Starcruiser voyage is an exclusive MagicBand, which will be used as a “databand” during the immersive experience. Click here for a spoiler-free guide to show you what the band looks like and how to use it during your stay.

Guests can use the Play Disney Parks app on their personal phone to access the Datapad, but we were actually given a phone to use as the Datapad for the duration of our trip.

The Datapad Plays a Huge Role on Your Journey

The Datapad not only holds the trip’s itinerary and map but can also be used to interact with different areas of the ship and complete missions. You can read all about how to use it right here.

Checking In at the Starcruiser Terminal

To get to the Starcruiser, you’ll follow directions to the Starcruiser Terminal. When you arrive, you will receive complimentary valet parking and crew members will handle your baggage to ensure its safe delivery to your cabin on the Halcyon.

Another crew member will get you swiftly checked in and set you up with MagicBands and Datapads.

For a full overview of the process, click here.

Once you enter the terminal, you tap in with your MagicBand and go through security. Cast Members (in regular Disney Security Cast costumes to avoid confusion) go through your personal bags and direct you through the scanners.

Before boarding the launch pods, a safety video is played. It goes over the procedures in case of an emergency onboard the Halcyon. The video gives very clear examples of how to tell the difference between an actual emergency and an in-story “alert.”

The launch pod experience is short as the pod takes you up into space to dock at the Halcyon. Each pod holds approximately 18 people maximum, so it’s not just your party, but it wasn’t too crowded. Once it “docks,” the doors on the opposite side open directly into the Atrium, where crew members are waiting to greet you.

After checking in and settling in, it’s time for the Welcome Lunch Buffet in the Crown of Corellia Dining Room.

You can read about all of the options available and our review on all of the food here.

Dinner on Night 1: An Evening With Gaya

Dinner is also in the Crown of Corellia Dining Room. At dinner, you are treated to a performance by galactic superstar, Gaya.

The next morning, you can enjoy a breakfast buffet in the Crown of Corellia Dining Room.

The breakfast buffet blends inventive options with classic fare, such as waffles, fruit, and eggs.

For those who return hungry from Batuu or remain on the Halcyon, a lunch buffet is served in the Crown of Corellia Dining Room on day 2 of the Star Wars: Galactic Starcruiser.

Between the excursion to Batuu and dinner, guests are invited to cocktails in the Sublight Lounge.

We reviewed all of the cocktails and snacks unique to the out-of-this-world lounge. Please note, alcoholic beverages and non-alcoholic specialty drinks are not included with your cruise but are available for an additional charge.

Star Wars: Galactic Starcruiser passengers can also participate in a drink tasting called Cantina Chronicles on the second day of their voyage.

Day 2 Dinner: “Taste Around The Galaxy”

Dinner on the second night of the Star Wars: Galactic Starcruiser is themed to a Taste Around the Galaxy, featuring the infamous blue shrimp. Check out our thoughts on each item served here.

This meal is served family-style with a fair bit of fanfare as each dish is introduced. You can purchase the Captain’s Table upgrade for this dinner as well, but you cannot purchase Captain’s Table for both dinners.

Passengers can enjoy a Sweets & Treats buffet in the Crown of Corellia Dining Room before bed on their final night aboard the Halcyon.

Day 3 onboard the Star Wars: Galactic Starcruiser is departure day and much like Disney Cruise Line voyages, disembarkation is bright and early. However, there’s time for one last breakfast buffet at the Crown of Corellia Dining Room.

Some of the offerings are the same as on day 2, but there were some new intergalactic treats as well.

Different characters will assign you missions and invite you to secret meetings during your voyage. Your “reputation” will grow depending on who you help. Read our spoiler-free guide to missions and reputation.

Like all cruises, your journey on the Star Wars: Galactic Starcruiser includes a mandatory ship muster on the first afternoon. We were given important information, both for the reality of our stay and for the story set-up.

We gathered in the Atrium on Deck 6 just before the muster was scheduled to begin at 4:00 p.m. You’ll meet many of the characters onboard the Halcyon and share a toast to your voyage with the other passengers.

The cruise director’s toast is hoasted by Lenka Mok at the end of your first night aboard the Halcyon, and a few twists and turns in the story might happen during it.

Depending on your pre-assigned time slot, which can occur on either day one or two, you will then take part in Lightsaber Training.

The Lightsaber Training Pod is located on Deck 4 of the Halcyon. And your time slot can be found on the itinerary in the Datapad.

One of the activities on the first night of the Star Wars: Galactic Starcruiser is Sector Set, billed as a Halcyon-exclusive game featuring planet matching.

Like Lightsaber Training, your Bridge Ops Training is pre-scheduled for either day one or two. When it comes to your assigned time slot, you’ll head to the bridge to learn how to operate and defend the Halcyon in Bridge Training.

For an in-depth look at Bridge Ops Training, click here.

On the second day, an excursion to the planet Batuu is scheduled. When it’s time to board the transport shuttle to Batuu, guests are directed to the transport dock.

Prior to boarding, the crew gives guests a special pin to wear on Batuu and then they board the infamous “box truck” to Batuu. Click here to see the full experience and themed interior of the shuttle.

The last shuttle from Batuu back to the Halcyon departs at 4:00 p.m., so don’t be late!

Whether or not guests complete missions, they can use experience redemptions to ride Millennium Falcon: Smugglers Run and Star Wars: Rise of the Resistance.

Guests who get a little “cabin fever” and need a little fresh air onboard the Star Wars: Galactic Starcruiser can make a visit to the “climate simulator.”

The Halcyon Celebration, including a simulated fireworks spectacular, is held on the final night of the cruise after the story is wrapped up in a final battle.

No Disney Cruise would be complete without exclusive merchandise, and the Star Wars: Galactic Starcruiser is no exception. We’ve compiled a full list with prices of all merchandise available from the Chandrila Collection gift shop on the Halcyon.

The onboard Chandrila Collection may offer all your in-universe merchandise needs, but if you’re looking for Galactic Starcruiser-branded items, look no further than a kiosk outside the exit.

Should You Book the Star Wars: Galactic Starcruiser Before, During, or After a Walt Disney World Trip?

Keep checking back for more coverage as we keep updating this post.

Next
Universal Pictures Pauses All Theatrical Releases in Russia